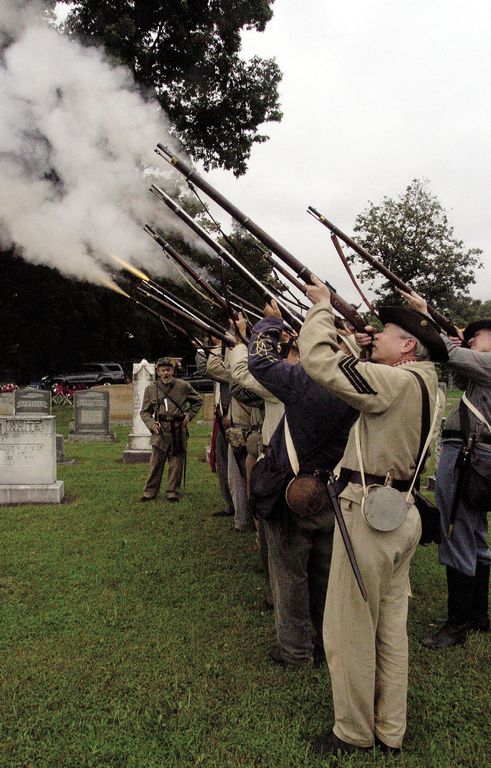 ADVANCE – Jim Jones looked toward the sky Saturday afternoon. His late Uncle Naylor Vogler was on his mind. It was in the early 1950s that “Uncle Nay” had come to Jones, saying they needed to find the grave of his grandfather, Jonathan Lafayette Vogler, a private in the Confederate Army who had died in 1862.

They searched high and low in the area in Forsyth County where Jonathan Lafayette Vogler had lived before he joined the Confederate Army at age 30 on June 11, 1861. They believed he was buried at Bethel United Methodist Church on Burke Mill Road in  Forsyth, but church records went down in a fire. There are 363 unmarked graves in that cemetery.

On Saturday, Jones and scores of Vogler relatives and other residents, joined the Sons of Confederate Veterans in placing a marker commemorating his service on the grave of his wife at the Advance United Methodist Church cemetery.

Jonathan Vogler was conscripted into the Confederate Army, but served with pride with the Co. K 21st Regiment of N.C. Troops from Forsyth County. The company was engaged in several battles – in Manassas, Sharpsburg and Fredericksburg, Va. He died in a hospital in Lynchburg, Va. from an unknown ailment. His death was not considered battle related.

He gave hints of his condition in a letter to his wife dated Nov. 13, 1862. He died on Christmas Day that year.

Dear Wife. I seat my self to let you no that I am not very well at this time for I have been vaccinated and it made me very sick for 3 days but I hope when you get these few lines you and the children will be in good health. I want you not to have my little gall’s funeral (his daughter had died) preached until I come home ..

He had written on Aug. 30, 1862: … we hant drilled any yet and we hant got in nary fight yet and I don’t know when we will. I would rather see my little children than to have five thousand dollars. We are good spirit that we will all be at home in a few weeks. I am better satisfied than I expected to be. I remain your affectionate husband till death …

He wrote on Sept. 4, 1862: I want to see you and my dear little ones. I reckon I think about you and my little children. It is enough to break up my heart. I must come to a close by saying please rite soon. Til Deth I remain your loving husband.

The ceremony included re-enactors from the 21st, 28th and 26th regimens of the Sons of the Confederacy, who gave speeches, fired guns and a canon in memory of Vogler.

“We’re here to honor the Confederate veteran soldiers,” said Greg Cheek, commander of the 21st Regiment. “The cause is to make sure they are not forgotten.”

Cheek said that Vogler probably saw action pretty quickly in Richmond, Va. after joining. The 21st helped save Richmond in that battle. “They were in almost every battle in northern Virginia.”

The group brought two historically accurate flags to the ceremony. The flags were important, Cheek said, so the soldiers would know where to line up. “If the enemy captured your flag, you were humiliated. Only sergeants could carry the flags.”

After his death, the regiment moved on while Vogler was buried in Lynchburg.

Later, his uncle went to retrieve the bodies of his own sons. He also exhumbed the body of Jonathan Layfayette Vogler, packed it in coal dust and brought it back home, “where it belongs,” Cheek said.

Chaplain Roy Adams said the Rebels and Yanks respected each other. He told a story of a Confederate bunch, near starvation, that went into a cornfield to try to glean something to eat. They were confronted by the voice of a Yankee soldier, and told him they were just trying to find something to eat. The soldier let them be. When the Confederates got the order to charge through the cornfield to the enemy, they called out, “Hey Yank, here we come.”

The service included music, and ringing of the bell from the Advance Academy in honor of Edith Zimmerman, who was there and is the only living person who attended the academy. 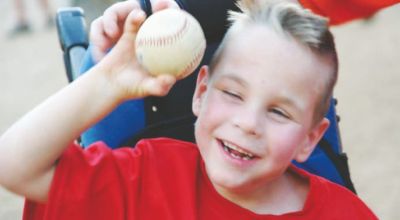