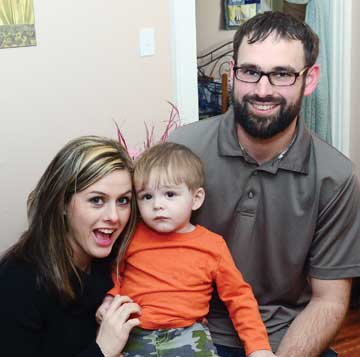 Young couples wanting to have a baby almost always think they should wait until they are financially stable.

Daniel and Megan Markland thought they had done just that. Married in 2008, both had jobs, Megan as a teacher in the Davie County School System and Daniel with the Mocksville Public Works Department. Vehicles were paid for, and most importantly, they wanted a baby.

Parents were ecstatic, so were friends and relatives. “He was perfect when he was born … just beautiful,” Daniel said.

Then, the problems started.

Megan said his first two or three days at home, he kept nothing down. Breastfeeding didn’t work. They switched to a bottle. He would drink a little, then throw up – not the spitting up one expects from a baby – but projectile vomiting of everything in his stomach.

They also started to notice that his body seemed to be tilting to one side, and his breathing became labored when they lay him down. But if they fed him while he was sleeping, it stayed down more often.

They went to doctors, and quite a few said they knew what was wrong and had the answer. None did. The parents think it is because Isaac still looked healthy.

At age four months, he still couldn’t eat or breathe. They stayed with him 24 hours a day, holding him upright so he could breathe while sleeping, trying to get some food into his system. Daniel remembers holding him for 14 hours straight, 12 of them trying to get some of the bottled nutrition to stay down. Daniel had taken a three-month leave of absence from his job.

At times, they had to shake him to get him to breathe again.

Finally, it was discovered that Isaac had suffered bleeding on the brain in utero – sort of a stroke before he was born. Doctors were looking for physical causes for his symptoms when they were neurological.

The family had an appointment at Duke hospital for June of last year to install a feeding tube. On March 20, Isaac quit breathing and was taken to Brenner’s Children’s Hospital. He went 52 hours without eating a thing. “He shriveled up. It was very scary,” said his dad.

Still, doctors weren’t listening to the parents. They tried to install tubes which Isaac’s body rejected. To top all of that, Daniel and Megan contracted food poisoning while staying with Isaac at Brenner’s.

“At that point, I knew I wasn’t going back to work,” Megan said. “I love being a stay-at-home mom and we never thought that would happen.”

The feeding tube was installed, and the couple provides the nutrition through that tube while Isaac is sleeping. Sometimes still, he throws up. It’s a neurological cause that makes him have trouble breathing and swallowing. But unlike a stroke victim who has to re-learn how to do things, Isaac has to be taught how to swallow – because he never knew how in the first place.

They give him food regularly, things with sensations like Oreos, crackers and fruit. Most of the time, he’ll chew for a while then spit it out. They work with physical, occupational and speech therapists who are trying to get him to function better.

They remember soon after that feeding tube was put in, and they really got some food into his stomach.

“He melted like jelly into the bed,” Megan said. “It would make me mad if I was hungry and I couldn’t fulfill that need, and that’s what he’s dealt with all of his life.”

There’s no doubt that Isaac is an active little boy. He loves to mimic animal sounds, and can sign what he wants better than with verbal communication.

“He knows what you’re saying,” Daniel said. “He is so smart.”

The couple has been humbled by support from family and friends and those at First United Methodist Church of Mocksville, where one fundraiser was held, and another is this Saturday.

When Isaac was born, they thought they had enough money. “We needed twice that the first month,” he said. They had insurance but within months, their savings had been depleted.

They put their house on the market, and were told it would be a tough sell. It sold within a couple of months.

They found a rental home in town, and Daniel and his dad helped remodel it. An anonymous donor paid the rent for a year.