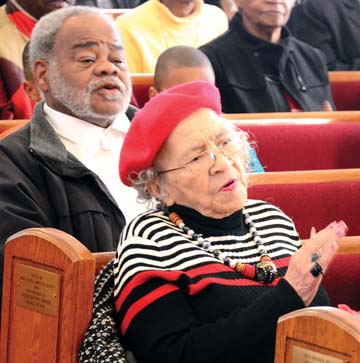 If Dr. Martin Luther King Jr. and other civil rights leaders were alive today, what would they think?

“If these people would come back, they would hold their heads down,” said Dr. Vivian H. Burke, speaking at the Davie NAACP’s celebration of King’s life Monday at Shiloh Baptist Church in Mocksville.

The key, she and other speakers said, is with education and voting. Much of the talk was about the new Voter ID law in North Carolina.

“What’s going on in Raleigh has taken us back 20 years. Racism is still alive,” said the Rev. James T. Clement, president of the Davie NAACP chapter. “We cannot rest. We’ve got to work harder and harder. We want to move forward – not backward.

“We fought for the right to vote … and they’re trying to send us back to the Jim Crow era. We refuse to step back. I’m not going to let people in Raleigh turn us around.”

“These changes have nothing to do with people voting illegally. There’s not a lot of that going on. We can’t even get people to the polls once,” Brown said. “We know the people who are coming to vote. The legislators want people who vote to look more like them and less like you and me.

“The history of this country is trying to keep you and me from voting, especially when these votes make a difference.”

Brown pointed out that minorities traditionally vote early. The legislature cut the number of early voting days. Minorities are less likely to have a photo ID. Now, one will be required to vote. It doesn’t matter if the poll worker knows you. You must present a photo ID with the same address listed on your voter registration.

N.C. Rep. Evelyn Terry, wife of Mocksville Second Presbyterian’s minister, said it is time to shift gears – to learn the new 57-page voting law, abide by it and vote.

She quoted King during his acceptance speech for the Nobel Peace Prize: “Unarmed truth and unconditional love will have the final word in reality … temporarily defeated is stronger than evil triumphant.”

“Remember that, we’re temporarily defeated,” she said. “It is our duty to meet every criteria that is in those 57 pages and be there to vote in droves. We will not be defeated. Despite how dark things must look, we must persevere. We know our cause is just. Evil will be overcome by good.”

Burke, a Winston-Salem City Council member since 1977, said people should not be confused by her small size and calm voice. “I’m a tough sister,” she said.

“Dr. King, when he took his journey, I truly believe it was commissioned by God. He knew this man would change hearts. Who could take what he took without fighting back? But God had commissioned him … and put soldiers around him.”

She said it is important to teach young people about the struggles of African Americans.

“We have too many mean people who are trying to push us back. We need to teach our young folks … and maybe they will stay in school and get an education.”

Politics, she said, are the future.

When she took office, folks in East Winston were treated badly by police. She changed that. When she got her first job, she had to search for a bank that would do business with her. Substandard housing has been improved.

“We cannot be satisfied. We must hold our representatives accountable,” Burke said. “Don’t let this be just this day. Go out and share and give of yourselves. May you stand tall and stand for what is right.”