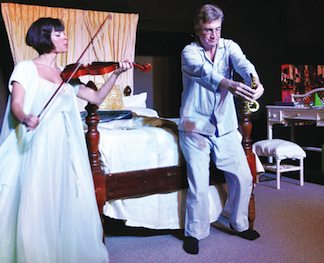 The second season will include four new musical revues featuring hits from dozens of Broadway musicals.

“On Broadway and In Love” will kick off the season with a preview on Feb. 6 and then seven performances through Feb. 16. There will be a performance for Valentine’s evening including catered treats and champagne.

March 27-April 6 join in the laughs for “Funny Stuff From Broadway” with comic songs from some of Broadway’s funniest shows.

“Before Oklahoma” previews on May 8 and runs through May 18. The revue features Broadway hits from the 20s, 30s and 40s and includes a second gala for Mother’s Day.

Season tickets are on sale and may be purchased online at the theatre’s website, www.broadwaysbest.biz. Brochures are available for mail orders and are being distributed to many Triad restaurants, retailers and arts organizations or call for information at 336-575-4446. Season tickets are $70 for adults, $60 for seniors and $45 for students. (Additional fees to gala performances.)

Broadway’s Best began producing fundraising revues in April of 2013 to develop funding and awareness of plans to renovate the Farmington Road site into a 250-seat Summer Stock Theatre; creating jobs for actors, dancers, musicians, technicians and designers. Organizers hope to partner with local wineries and other Triad attractions to bring in bus tours and other groups to attend events, tours and other attractions.

Broadway’s Best Theatre is near I-40 and Farmington Road, Exit #174, in Davie County. For tickets and to get more information visit www.broadwaysbest.biz.