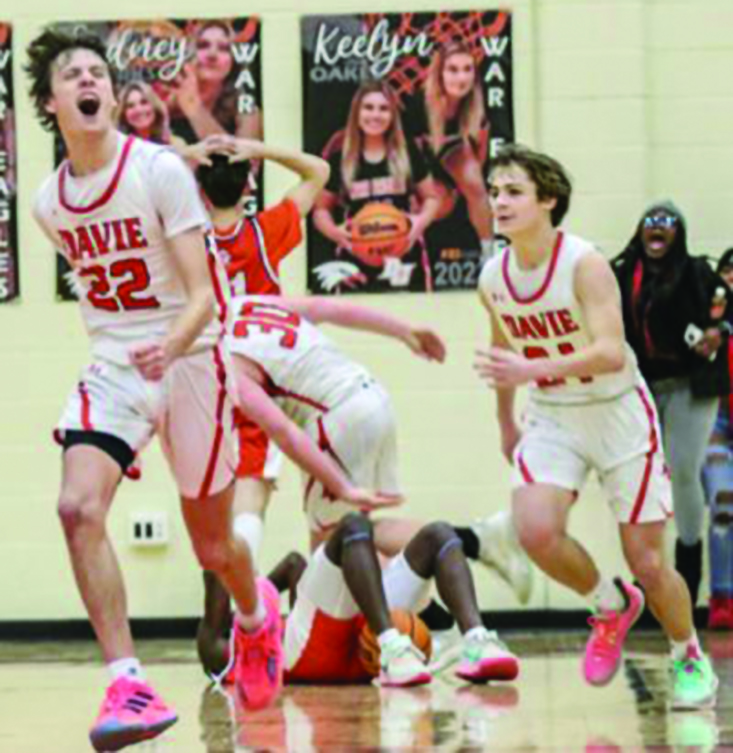 Glenn had Davie’s varsity boys basketball team on the ropes, leading by six with 3:20 to play. But Jackson Powers, Coleman Lawhon and Hayden Williams came up big at crunch time and Davie snatched a huge win, 51-50, over the visiting Bobcats on Jan. 13.

The War Eagles needed this win badly in their bid to finish in the upper half of the Central Piedmont Conference. They threaded a needle on a day they were without a starter as Ethan Ratledge, who averages 7.3 points, was home sick.

“Ethan told me at 3:30 or 4 he wasn’t feeling well,” coach Josh Pittman said. “He apologized. I said: ‘You don’t have to apologize for anything. Your health is the most important thing. A game is a game. We’ve got next man up.’”

The War Eagles built a 32-27 halftime lead by shooting 50 percent (11 of 22). They staggered Glenn at the start of the third. After Lawhon scored on a drive and Burke Rosenbaum nailed a 3-pointer, they were in control at 37-27.

The Bobcats, though, struck fear into Davie by responding with a massive 21-5 run. Davie missed 11 of 14 field goals in the third, and when Glenn completed a three-point play, it had a 48-42 lead with 3:20 remaining in the fourth.

Sparked by Powers, Davie clawed its way back. The 6-6 sophomore rebounded his own miss and stuck it in to cut the deficit to 48-44 with two and a half minutes left.

The Bobcats went to their delay game. They worked a minute off the clock. They appeared to have Davie behind the eight ball as the clock dipped below 1:30. Instead of telling his team to foul and put Glenn on the line, Pittman instructed his boys to keep trapping. Lo and behold, Glenn threw the ball out of bounds at 1:19.

“I was going to ride it out because I trust that defense,” Pittman said. “Once we finally started trapping, they threw the ball away two straight times. I keep that defense in my pocket; it was similar to the defense we ran when we were down against Reynolds. It’s like an organized scramble. I wasn’t really stressing because I could tell they were pressing more and more with the passes. We were lucky the right person caught the ball and he threw it away for us.”

Moments later, Davie inbounded on the sideline. Lawhon passed it in to Powers, who gave it right back to Lawhon in the deep right corner. He drained a 3 that sliced Glenn’s lead to 48-47 at 1:03.

“That’s a tribute to them reading the play,” Pittman said. “A lot of our motion offense works like that. You’ve got to read what the defense is doing, and then we have to adjust.”

That was the first of three humongous plays that Lawhon made down the stretch. Braddock Coleman and Lawhon trapped a Bobcat near halfcourt. Lawhon ended up with a steal and streaked the other way for a go-ahead layup at :37.

“He tried to split (the double-team) with the dribble and it went right to Coleman,” Pittman said.

Davie had a 49-48 lead, but it was far from over. Glenn senior guard Amani Mock drew a foul at :29. He hit both ends of a one-and-one to put Glenn back in front by one.

“(Mock) is a small kid, but his heart is huge,” Pittman said. “I knew he was going to knock them down. I had him a little bit in AAU. He’s undersized, but he’s got the heart of a lion. I’ve seen him knock down free throws like that before.”

Now it was do-or-die time for Davie. Williams received a pass on the left wing. He let a 3-pointer fly and the whistle blew: Foul, three shots, nine seconds to go.

Williams missed the first free throw, but he swished the second to make it 50-50. Glenn called timeout to ice Williams and set up its final play. Williams walked back out and swished the third shot to give Davie the 51-50 lead.

Then Davie had to hold on for dear life. A Glenn player found a lane to the basket, but Lawhon slid over and blocked the shot out of bounds with 3.8 seconds left.

“I said make sure we’re helping on the drive, and Coleman did an excellent job with help on the block,” Pittman said. “He came through for his teammates big time on that block.”

Glenn inbounded from the right sideline. The ball handler lost the ball as he tried to make a move and Davie had a heart-stopping victory.

“We denied the guys that needed the ball, and they did that off instinct from practice and work,” Pittman said. “They threw it to their big and he got frustrated and didn’t know what to do with it.”

Lawhon had a stellar performance, scoring 17 points on 7-of-11 shooting and adding three steals and three blocks.

“Ian played well. I’ll take (that stat line),” Pittman said. “Hayden played really good defense after he settled down. I told him we need him to play defense and rebound.”

Last year the War Eagles finished 13-11 and graduated all five starters. Davie (13-4, 3-4 CPC) already has 13 wins with at least eight games remaining. What an accomplishment for a squad with two seniors, four juniors, three sophomores and one freshman.

Notes: Three nights earlier, Davie had no trouble at Parkland, winning 65-49. Williams (14) and Powers (13) paced the scoring. Lawhon had nine, Ratledge eight, Koontz seven, Rosenbaum six, Landon Waller six and Gavin Reese two. … The Mustangs (5-9, 0-6) suffered their seventh loss in a row. … Glenn fell to 8-9, 2-5, while Davie moved from sixth to fifth in the league standings. … Davie prevailed over Glenn despite shooting 28 percent in the second half. … A final by the slimmest of margins doesn’t happen as much as you might think. This was Davie’s first one-point game since a 75-74, double-overtime win at Reagan in February of 2020. It was the first one-pointer at home since a 54-53 loss to East Forsyth in January of 2018.