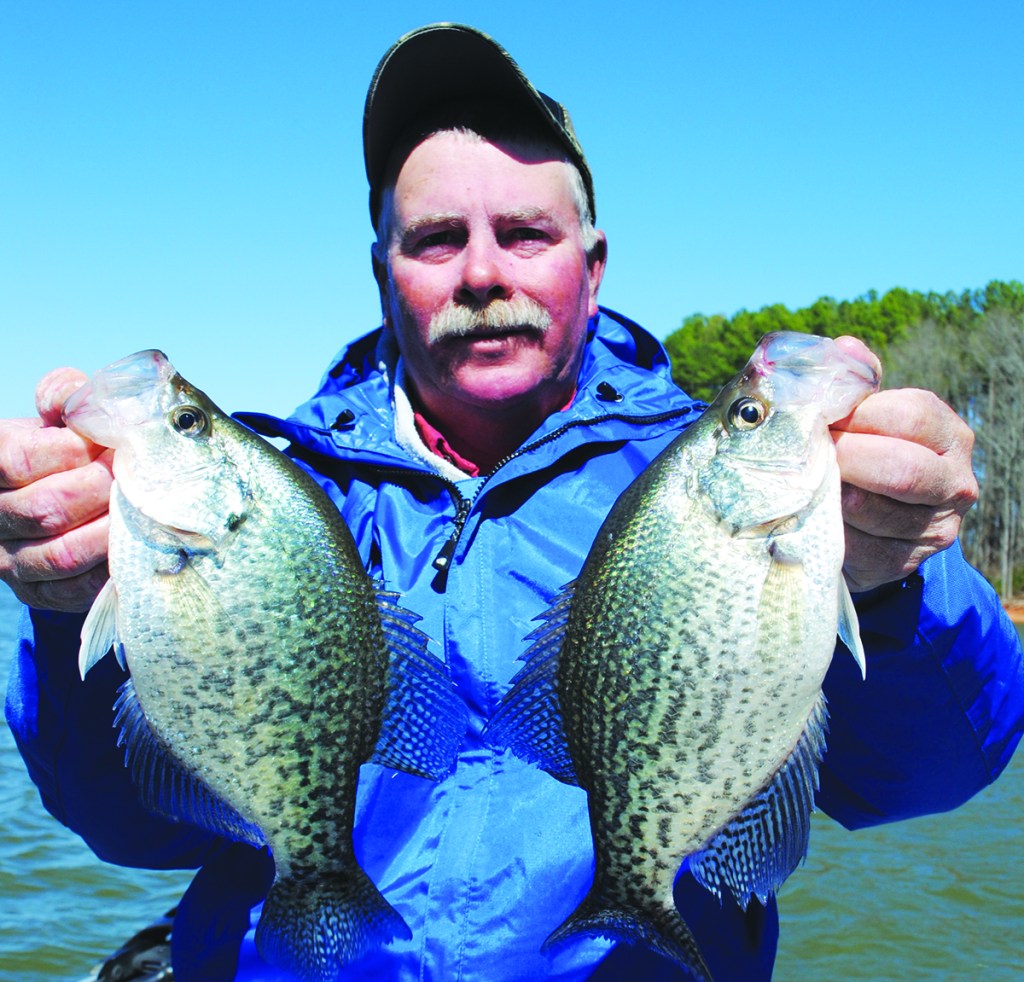 So, what about a crappie for the New Year?

Those are words that don’t necessarily go together for a lot of fishermen, and that’s a shame, because the serious anglers among us have learned that there are crappie to be caught at times other than the traditional springtime “when the dogwoods are blooming” mantra.

Crappie have become a year-round target for a lot of fishermen, once the mystery of how to catch them in places besides shallow water was unlocked.

Ed Duke of Concord, a former crappie tournament director and now a manufacturer of crappie-fishing tackle, has understood for years that crappie are a great fish to target year-round, and especially when the weather is cold. You just have to break with the idea that crappie are meant to be caught along the bank.

“Right now, crappie are beginning to leave the brush piles and getting into their winter patterns,” said Duke (www.southerncrappierods.com). “Once the winter solstice arrives and the days start getting longer, crappie will start moving out to deep water, in the river channels.

“They’ll stay in the river channels and stage up at the mouth of creeks, and they’ll stay right there until spring. We’ve been catching them there for three weeks. They may go up and down the creeks as weather fronts come through, and they’ll move up and down. They’re usually around 20 feet deep, but any real warm day with plenty of sunshine, they might move up to within 2 or 3 feet of the surface.”

Duke and Chris Bullock of Townsville, who operates Kerr Crappie and Cats Guide Service on Kerr Reservoir on the North Carolina-Virginia border (aka Buggs Island Lake), both said that fishermen can idle around the mouth of creeks, using their depth finders to search for little pods of fish that will stick together all winter. Then, they approach those fish in different fashions.

When he’s fishing for crappie, Duke’s boat will look from above like a spider, with multiple rods sticking out around his bow or stern, sometimes as many as a dozen. He keeps his boat on the move, either dragging mini-jigs and tiny soft-plastic lures well behind his boat or dropping them down on weights around the bow. Veteran fishermen call the techniques “pushing” or “pulling” – Duke calls them “tight-lining” and “long-lining.”

He’ll long-line behind his boat, pulling a spread of jigs, while he’s looking for fish on his depth finders. If he finds them and thinks he can stay on them – maybe they’re relating to a deep rock pile or some piece of structure they’re using as a spot to ambush passing baitfish – he’ll move his rods to the bow and fish straight down to the fish.

“Once you get in an area that’s holding fish, you’ll find several groups of crappie. I look for different groups of fish and move between them,” Duke said. “I’ll tight-line when I can see a school of fish on my sonar, because I can stay on them longer. ”

Bullock rarely fishes more than a single rod at a time. He’ll idle around until he finds fish, then target the spot where they’re holding and cast directly to them with a jig, a tiny jigging spoon or a live minnow.

“At Kerr, it seems like we have two kinds of crappie,” said Bullock (252-902-4039). “One kind is going to find those butterbean (threadfin) shad back up in the creeks and set up and stay back there until spring. The other will winter in the river channel around deep brush, stumps and rock piles.

“The LiveScope (depth finder) has changed the game, because you can find crappie around brush or stumps and drop a jig on a spinning rod down to the depth of the school and watch their reaction,” Bullock said. “If they’re feeding, you can catch them. If they’re not hitting a jig, you can tie on a split shot and a hook and drop a live minnow in front of them.

“The deep-water crappie will stay in those places until the water temperature begins to rise, usually in February. Then, they’ll start moving back in the creeks. A lot of fishermen miss the first big spawn – when the biggest fish move in to spawn, because of that old saying that the crappie spawn when the dogwoods are blooming. That’s wrong. If you have the right moon and the water is 52 to 55 degrees, those big fish are going to move in and spawn.”