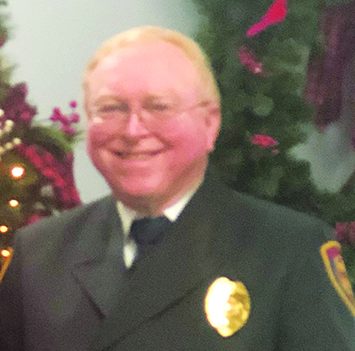 ADVANCE – Two veteran officers of the Advance Fire Department were honored  by the Davie County Fire and Rescue Association at its annual awards banquet at Fork Baptist Church.

Capt. Ronnie Robertson was inducted into the organization’s Hall of Fame and Lt. Chris Dennis was named First Responder of the Year.

Robertson, 70, first volunteered at the Advance Fire Department to help with its barbecue sales when he was a student at Davie High School.

He was then talked into taking a class that needed another warm body to function by Rick Hockaday, who became a member of the Hall of Fame five years ago.

“One thing led to another,” Robertson said. “And soon enough I was a training to be a firefighter.”

Over the next 52 years, Robertson served the department as firefighter, lieutenant, captain, assistant chief and deputy chief.

He is a captain again assisting Chief Rodney Miller as public information officer. He has also been coordinator of the department’s popular summer fire camp for middle schoolers for the past eight year. Robertson still answers fire calls.

Robertson had conducted fire safety drills at the Shady Grove Elementary School for the past 39 years and remembers that the first one consisted of two parked fire engines sounding their sirens as a signal for the kids to evacuate.

In 1976, Robertson, who was “too skinny” to qualify then for a job with the Winston-Salem Fire Department, was one of the first four hired by the newly created Davie County 911 Communications unit. He rose to direction of E911 Communications and retired in 2015.

Robertson serves as treasurer of the Advance Fire Department’s Board of Directors.

He is married to the former Mary Branon. They have two grown children and a granddaughter.

• Dennis, 39, the First Responder of the Year, joined the Advance department five years ago. There are 12 fire departments in Davie County and he also works part-time at the Mocksville Fire Department.

He was persuaded to attend a meeting of the department’s Board of Directors by Firefighter Jeff Carter and, as he said, “I was hooked.”

An EMT, Dennis is also certified in a myriad of fire and rescue specialties.

Dennis attended Emory-Henry University in Virginia where he was a 280-pound defensive tackle on the football team. He graduated from University of North Carolina-Charlotte with a degree in biology intending to pursue a career in sports medicine. That didn’t work out.

Driven by a desire to “help people”, which is a common denominator among fire and rescue volunteers, he worked for a Red Cross testing lab for eight years.

Now 50 pounds lighter than in his football days, Dennis is a data analyst for Crothall Health Care in Mooresville. His job permits him to work from home which allows him to answer daytime alarms.

Dennis who prides himself with being calm and collected at an emergency incident said of receiving his award, “I had people helping me every step of the way. They deserve the award I was just doing my job.”

Fire Chief Rodney Miller, commenting on the honors, said, “Ronnie is a reflection of the best this department had to offer over the past half-century. Chris is our future.”