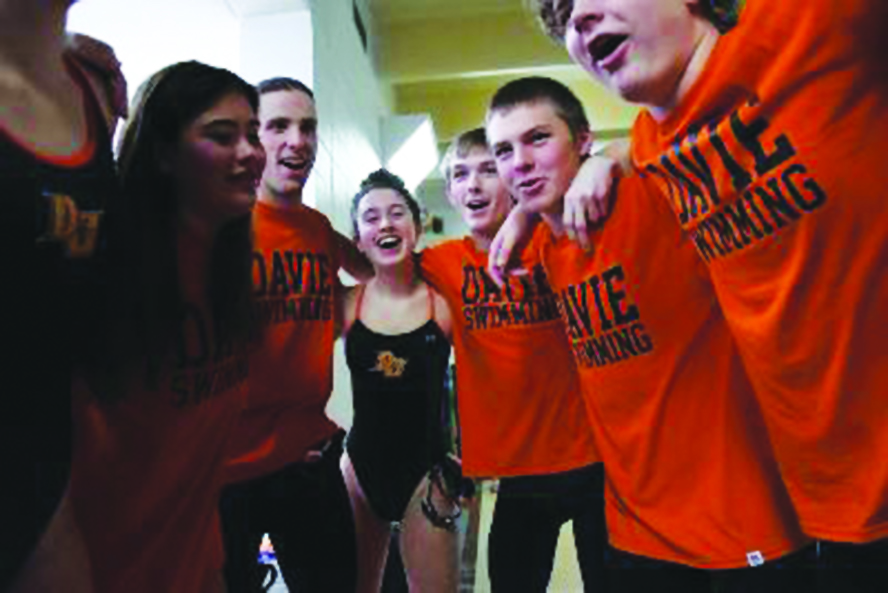 Earnhardt Harris validated the hype that’s followed him for two seasons in the Robert Sawyer Invitational at the Greensboro Aquatic Center on Dec. 19.

Davie’s junior swimmer won the 100 butterfly, beating 45 competitors. He broke the program record in the 200 individual medley. He’s quite simply a stud in the pool for the War Eagles.

“Earnhardt is the epitome of a high school swimmer,” he said. “He has time management to practice before and after school while still bringing home excellent grades, the no-quit attitude, and a burning desire to do better than yesterday. After all, swimming is a behind-the-scenes sport until that one moment you stand on that block where you get one shot – no mistakes, no timeouts to come up with a play – and you are alone with years and years of work running over you. He has a work ethic where day after day, week after week, month after month, he puts in the time because he knows there is no off-season. He is the cornerstone of the culture we are looking to bring back to Davie swim.”

“He is selfless and would always put the team’s needs ahead of his individual goals, but we knew he is capable of breaking a record or two,” Hirata said. “We are so excited that he was able to achieve this accomplishment because it means so much to him. We’re just fortunate to have him on our team and that he is sharing his journey with us. Much of his success we need to give credit to his club team (Tyde) coaches – Bob, George and Richard. I have spoken with them and shared the news, and they were absolutely ecstatic for him. The swim community is a tight-knit group that cheer for all the swimmers’ success regardless of the team they swim for, and we absolutely love that about this community.”

There’s a lot to build on for a program that appears to be ascending.

“Like Aiden, Logan took advantage of a fast pool and had a personal-best time in the breaststroke,” White said. “Elliot also had a great day, and like Logan is an athlete that hates losing more than she loves winning.

“Overall this invitational proved to be another great meet for the War Eagles. The Sawyer is a great meet for our kids to see how they measure up to a couple dozen other schools that we could see again in regionals. We enjoy attending this meet for the competition and the venue. The GAC is a state-of-the-art facility that most folks only see at the Olympics.”