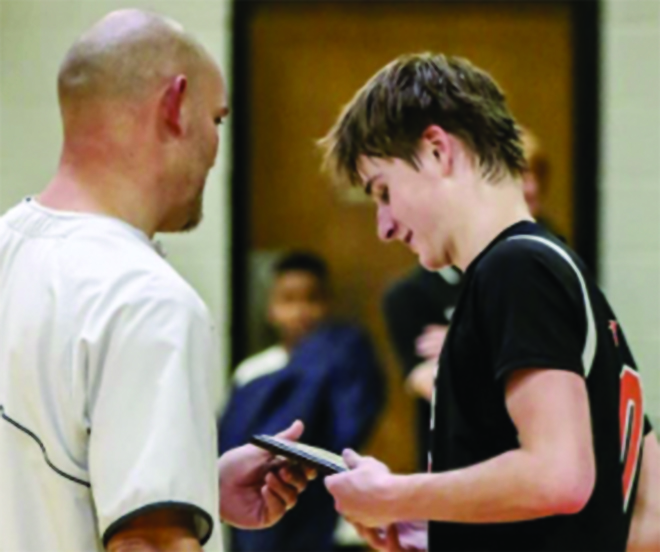 The eight-team tournament was held at Ledford from Dec. 27-29.

In the first half, the game looked bound for a tight finish. Davie led 28-26 at halftime in a struggle that saw nine lead changes and six ties. Davie, missing six of 12 free throws, had itself to blame for not having a larger lead.

In third quarter, though, the Bulldogs did not hang around any longer. Davie erupted for an 11-2 run. Coleman Lawhon scored off a rebound. Then Jackson Powers and Williams hit three 3-pointers. Davie went 4 of 7 from the arc in the third, with Williams connecting on three of four tries.

Everything clicked in a run that became pretty incredible as the second half moved on. Powers was trailing on the break and Lawhon threw it back to him, the 3-pointer falling. Powers pump faked a 3, the defender went in the air and Powers drove for two. Davie milked substantial clock, moved the ball all around and Burke Rosenbaum spotted Williams open behind the 3-point line. Williams drained it.

But the story of the game for Pittman was Davie’s defense against Dominic Payne and Dylan Hodges. Rosenbaum, Braddock Coleman and Ethan Ratledge did a tremendous job on Payne, a 6-2 junior who one day earlier surpassed 1,000 career points. But he was suffocated by Davie’s box-and-one, the mighty Payne finishing with nine points and one field goal. He went 7 of 10 at the free-throw line.

“We put a box-and-one on Payne because he averages almost 30 a game, and I think he had a couple of 40-point games this year,” Pittman said. “So I figured we had to take him out of the game. We went with Burke or Braddock and we threw Ethan in there a little bit as well to keep fresh bodies on him and disrupt his flow because he’s a smooth player. I wanted to give him different looks. Ethan is physical, Burke is smart and Braddock is like a little dog. He’s a little pit bull who is going to get under your skin and bother you. All of them stepped up and did a great job.”

Pittman pulled out his drawing board at halftime and ordered a triangle-and-two. Williams drew Hodges and wore him down. He had two points in the second half.

“(Hodges) could do a little bit of everything,” Pittman said. “He could drive. He’s athletic. So at halftime I decided we needed to go triangle-and-two. Hayden had No. 11 and Gavin (Reese) played defense on (Hodges and Payne) a little bit. We used several people on them because I noticed they only played five kids.”

Besides playing shut-down defense in the second half, Williams was the offensive heartbeat. He scored 20 points by hitting six of 14 3-pointers. He grabbed seven rebounds. He hit the 20-point mark for the third time, and he nailed six triples in a game for the third time.

“That’s him putting in the individual work, coming to workouts and being shot-ready that we preach about all the time,” Pittman said. “When you’re shot-ready, all you have to do is catch and shoot. I want Ethan to be more aggressive with his shot because he has a pretty shot.”

Powers was lethal outside, going 4 of 7 from long range to score 14 points. He also had seven rebounds. Lawhon had another wonderful all-around game (12 points, 8 assists, 6 rebounds, 3 steals). Rosenbaum scored six by going 6-6 at the line, and he also had four rebounds and two assists. Ian Koontz had four points. Ratledge contributed four points, seven boards and two assists despite fouling out with 7:05 left. Coleman had three points and Reese one.

“Last week we had big Owen McCormack (of Presbyterian) come in,” Pittman said. “We had Will (Tibbs, assistant coach) playing with the guys and we worked on making the extra pass. We also put in a different motion offense to help us move the ball from side to side, penetrate and kick, find that (open) guy and be a more complete team on offense. When we play unselfish, I just know at some point that rim is going to open up and we’re going to get great looks. When we were patient and moved the ball, we always got a good look.”

Notes: Davie’s five-game winning streak is the longest since a 13-gamer in 2018-19. … Davie improved to 10-2, while Trinity suffered just its third loss in 14 games. “They were 10-2 and had some good wins,” Pittman said. “I knew they were good, but they may have underestimated us.” … The tournament field included West Davidson, Uwharrie Charter, Lexington, East Davidson and Ledford. … While Davie spent three days at Ledford, Catawba College was hosting the 50th Sam Moir Christmas Classic. The Moir has traditionally had eight teams, but this year it was down to five as Davie, Salisbury and Kannapolis decided to go elsewhere. Davie played in the Moir from 1972-2021.

As you would expect, Davie completely dominated a Wheatmore team that fell to 4-6 in the first round on Dec. 27.

Baskets by Lawhon, Powers and Rosenbaum helped Davie build an 18-7 lead in the first quarter. Lawhon and Coleman were the go-to guys in the second quarter, when the margin widened to 42-17.

At intermission, Lawhon was on pace for 36 points; he settled for 18 as Pittman called off the dogs.