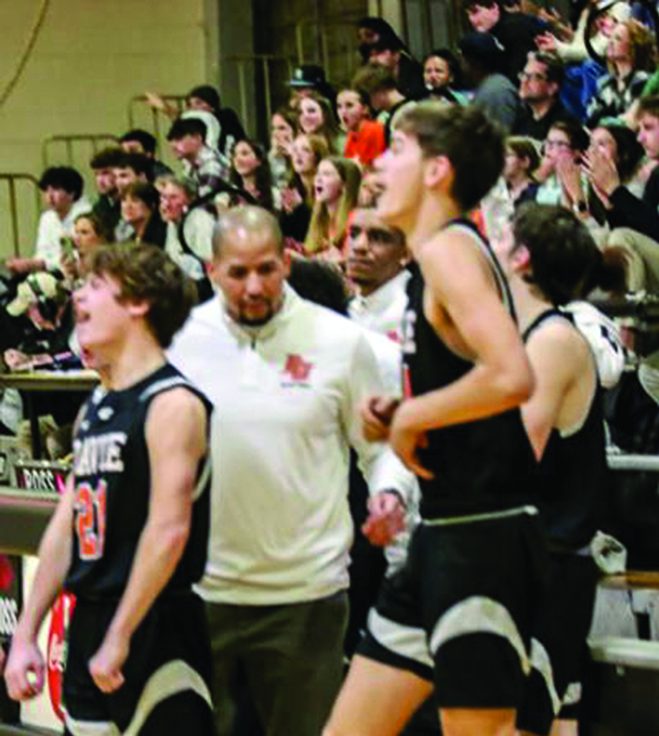 Ledford somehow came up with an inspiring run in front of their home fans after facing a 20-point deficit.

But the War Eagles did not collapse in their lowest-scoring game of the season. They held on 50-46 to capture the Davidson-Randolph Christmas Classic on Dec. 29. Their record (11-2 with a six-game winning streak) in a rebuilding year is what coaches and high school kids dream about.

“I’m proud of them,” Davie’s first-year coach, Josh Pittman, said. “We’re doing well, but we can’t rest and indulge too much in the moment. That’s why we had practice (the next afternoon) and we’ve got practice tomorrow morning at 9.”

Hayden Williams, Jackson Powers and Burke Rosenbaum together converted four of five 3-point shots in the opening minutes. Coleman Lawhon assisted three of the four. The orange-and-black fans on hand sniffed a rout at 14-6.

But Davie cooled off and Ledford, playing on its home court, crawled back in it. Davie missed its last seven shots in the first quarter and led just 14-12.

The War Eagles took a nice 27-16 lead to halftime, but it wasn’t because they were playing great on the offensive end. They missed 11 consecutive 3s, missed 17 of their final 22 shots and left the door open for the other team.

“Ledford is a hard place to win,” Pittman said. “If you’re up 20, you need to go up 30 because they’re not going to stop. When I was at Lexington, we played at Ledford six or seven times, so I know from personal experience.”

Davie caught another groove at the outset of the third. Rosenbaum, Williams and Ethan Ratledge combined to make 4 of 6 triples. Again, Lawhon was the one setting them up as he assisted all four of the bombs. The 14-5 run gave Davie a 41-21 lead with 3:29 remaining in the third.

Davie had delivered the knockout blow, right? Wrong. Just when you think Davie had sucked the life out of the Panthers, they staged a major rally. They made 10 of 15 shots during a span of 11 minutes. (Davie was shooting 3 of 13 during this time.) They banged home five 3-pointers. Their 25-7 run produced a jarring change in momentum. Davie’s lead had been chopped to 48-46 with :36 to go.

“I felt like there was a lot of stuff not being called when they were making that run, but I put a lot of that on us, too, learning how to finish that game without thinking it was over before it was actually over,” Pittman said. “During that time, we missed two or three – maybe more – layups. We had some bad timing on certain shots and a couple of turnovers.”

Ironically, the Panthers’ low foul count actually hurt them in the final 36 seconds. They only had three fouls in the half, meaning they had to foul Davie four times. That took 14 seconds off the clock. Ledford (7-5) sent Williams to the line with seven seconds remaining.

Undaunted by the pressure, Williams made both ends of the one-and-one to make it 50-46. Ledford made Davie sweat, but Williams made everything okay in the end.

“I like how we stayed composed, hit free throws when it counted and got a good stop at the end,” Pittman said. “Now it’s about us learning from this and getting better offensively with our spacing.”

Davie prevailed on a night when two of its top scorers – Powers and Lawhon – combined for 12 points. Rosenbaum, who recently climbed into the starting lineup, was a difference-maker with a season-high 11 points, three 3-pointers, three rebounds and two assists. Williams also hit three 3s to score 11.

Davie didn’t get monster production from anyone, but teamwork was the key. Ratledge had 10 points, 5 rebounds and 3 steals. Powers had 7 points. Lawhon had 5 points and 8 assists. Ian Koontz had 4 points and 6 rebounds. Braddock Coleman had 2 points and 3 assists.

“That’s what we want. We want team basketball,” Pittman said.

Williams took home the tournament MVP award, and Powers made the all-tournament team. Pittman, though, was disappointed that Lawhon didn’t make it.

“I thought Coleman should have been on there,” he said. “They put two guys from Trinity on there, which I didn’t quite understand.”