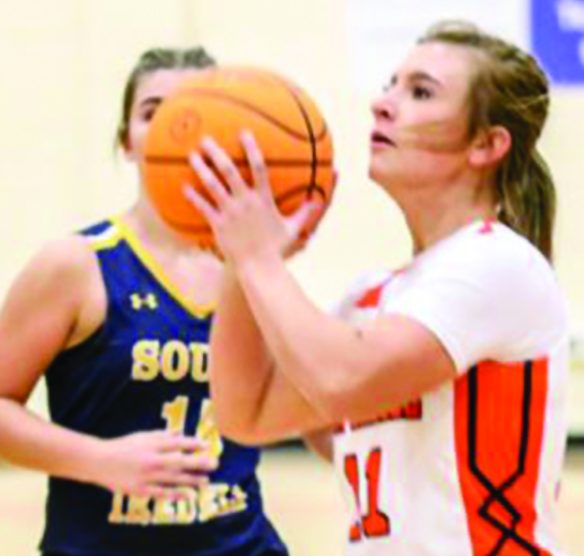 The Davie varsity girls basketball team went through a dispiriting stretch that left it 2-5 on Dec. 13.

Boy, a lot has changed since then.

The War Eagles won three straight and went into Christmas break feeling good. For the first time in seven seasons, they were .500 or better through 10 games. (The 2015-16 team started 6-4.)

The run has been facilitated mostly by the suffocating pressure defense that third-year coach Lindsey Adams instilled at the beginning of her tenure, and it bullied Central Davidson and Starmount into submission.

“In all the film I’ve watched, they don’t like (fullcourt) pressure, so I hyped my girls up to get all over their guards and turn them over,” Adams said after a 60-40 win at Central Davidson on Dec. 20. “The teams they’ve lost to were teams that fullcourt pressed, and the teams they had success with did not press.”

In a bruising first quarter, there were more fouls (18) than points (11). How disruptive was Davie’s defense at Central? It held an 8-3 lead at the end of one despite missing 14 of 17 field goals.

Adams let Kenadi Gentry marinate on the bench for the first few minutes of the game. The junior guard injected life in the offense the moment she entered the game. Davie was 0 for 4 from 3-point land before Gentry drained a triple. All of a sudden, the War Eagles couldn’t miss. Gentry hit another 3. Then Somer Johnson buried a 3. Malayka Rankin assisted all three treys as the War Eagles exploded to a 19-5 lead. They entered halftime ahead 28-16 as Rankin hit 7 of 8 free throws.

“My girls know they have to stay hungry, and I think (Gentry) responded well,” Adams said. “That showed a lot about her character because she could have been upset for not starting. But I think she came in with a chip on her shoulder. I was very proud of how she responded with that.”

At the outset of the second half, Davie wiped out Central’s dim hopes of a comeback. Gentry accounted for eight points during a 14-2 run that widened the gap to 42-18.

After their first 18 shots against visiting Starmount on Dec. 21, the War Eagles were shooting 22 percent and trailing the Rams 13-9.

Davie was 0 for 6 from long range before Spaugh hit a momentum-turning triple that sliced Starmount’s lead to 13-12. Spaugh scored off a Gentry steal, and now Spaugh’s hair was on fire. Spaugh converted a short jumper. Spaugh and a teammate trapped a Ram. Spaugh came out of it with a steal and dashed downcourt for an easy two. After Gentry nailed a 3, Spaugh made a pass from her knees and Oakes laid it in. Bailey Aderhold capped a 21-0 run with a 3.

What an impressive sequence for Spaugh, who scored nine straight points and finished with 17 points, eight rebounds, seven steals and two assists. She made 7 of 14 shots. She came in averaging 4.1 points and her previous high in two varsity seasons was 10.

“I’m super proud of her for knocking shots down and getting after it defensively,” Adams said.

Later in the second quarter, Johnson became the fourth War Eagles to hit a 3. Aderhold connected from deep as Davie carved out a 38-17 halftime lead and enjoyed a stretch in which it made 10 of 16 field goals.

Gentry had 15 points, four steals, three assists and hit 5 of 6 foul shots. Johnson (13 points, three steals) hit double figures for the third straight game. Aderhold had 12 points on 4-of-7 shooting, a season high for the freshman.

“Four people in double digits for us is remarkable,” Adams said.

In just her third varsity appearance, Lynch converted 5 of 7 free throws. “And that’s after she played four quarters in the JV game,” Adams said.

Notes: The last time Davie hit the 80 mark was in an 83-58 rout of East Rowan in 2009-10, when current assistant coach Debbie Evans was the head coach. In that game, Janna Dixon scored 17, Tia Clement 15 and Ashley Smoot 11. … Adams believes the tough early schedule has paid dividends. “I like to play several early 50-50 games to expose our weaknesses, and I think that’s what the Atkins loss was,” she said.