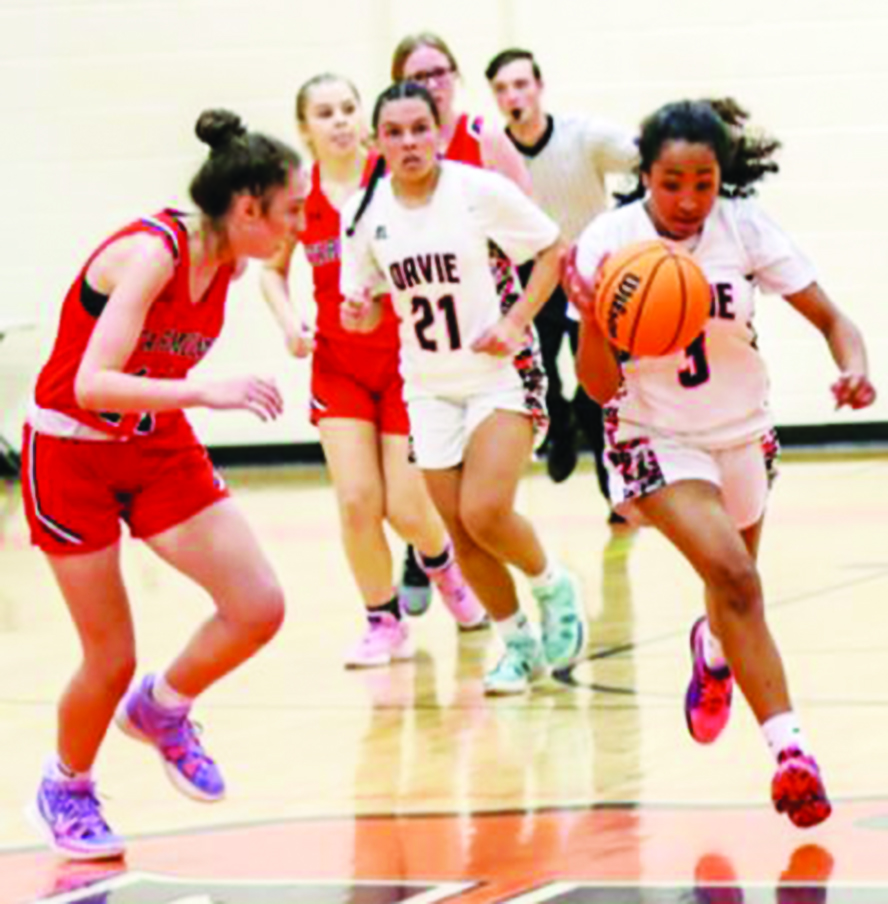 Britany Hernandez and Davie’s JV girls basketball team had a strong response from their darkest hour (Watauga), jumping to a big lead in the early going and beating Starmount.

Hernandez was the bright spot at Watauga on Dec. 17. She scored 13 points, hitting double figures for the fifth time, but it wasn’t nearly enough to prevent the worst loss of the season, 50-24. The Pioneers rolled to 6-1, while Davie limped to its third loss in a row.

Four days later at home, Hernandez put some wind back in Davie’s sails, scoring eight first-quarter points to lift her team to a 13-4 lead over Starmount. Davie rode the fast start to a 37-20 win.

“Britany knows what to do, when to do it and where to do it,” coach Lamar Russell said.

After taking a 24-9 lead to halftime, the Rams crept back within 26-17 in the third quarter. The War Eagles, though, regained control in the fourth and won going away. Five different players contributed to their 11 points in the fourth.

The War Eagles (3-6 overall) deserved some holiday happiness after dropping three games in five days. Ironically, the win came at the expense of someone Russell has known since kindergarten – Starmount coach Matt Payne.

“It’s a great way to go into the break,” said a giddy Russell. “We absolutely wanted to beat Starmount because that’s where I graduated from and I went to school with (Payne) from Boonville (Elementary) all the way up to Starmount. We graduated together and we work together now (at Yadkin Success Academy). This whole week we’ve been calling it The Showdown between us.”

Tarpley, the primary ball handler, battled foul trouble all game. Russell was concerned when she picked up her fourth foul early in the third.

“Tasia has been our floor general this year,” he said. “She has been forced into the point-guard position, but our team responded really well to her being out of the game. Everybody else handled the ball and did their job.”

Lynch not only ripped down her standard 11 rebounds – it was her ninth straight double-figure rebounding effort dating to last year – she hit two 3-pointers and scored a season-high 13 points, or nine above her average. Hernandez had 10 points and three steals. Croom had eight points.

“I’m very proud of KK’s game today,” Russell said of Lynch. “We’ve been working on (her outside shot) since last year. She didn’t have the confidence to shoot it. Tonight I said: ‘Let it fly.’ When she hit that first one, you should have seen the smile on her face. … Carleigh hit some big shots.”