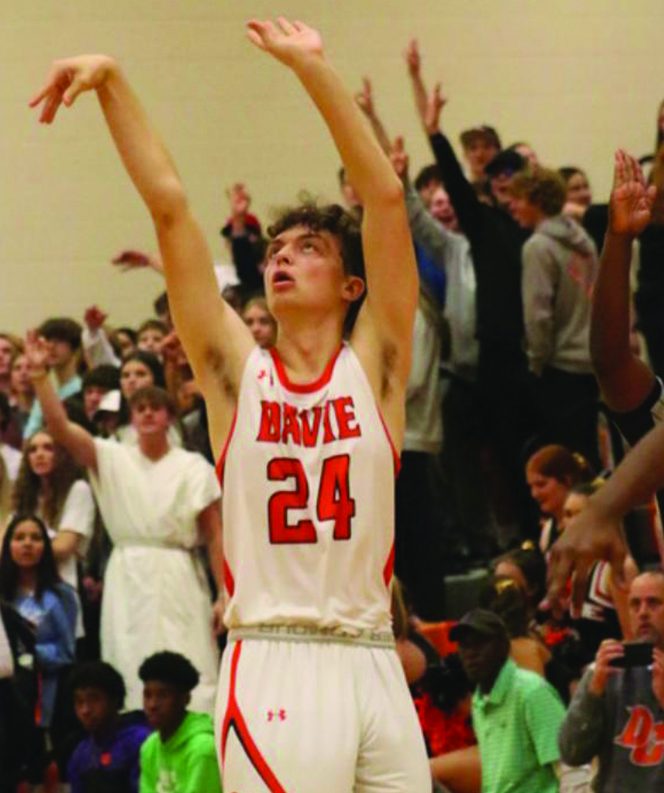 The Davie varsity boys basketball team followed a two-game slide with a three-game winning streak, but in the process the War Eagles found out about the perils of taking a team lightly. In the final game before Christmas against Starmount, there were moments when it appeared Davie was going to flop and suffer a bad loss.

The War Eagles pulled it out in double overtime, but the postgame mood was a far cry from the giddiness following the previous home win over Reynolds on Dec. 9.

“Hopefully we learned a lesson and understand not to underestimate any opponent,” coach Josh Pittman said. “And know that if we play as a team, we can beat anybody. But if we play as individuals, we could lose to anybody.”

On the heels of back-to-back losses, the War Eagles started sluggishly at Watauga on Dec. 17. They shot 33 percent in the first half and failed to build a significant lead.

“We started off a little slow because we were still shellshocked from the Reagan game (the night before),” Pittman said. “But as the game went on, we did some good things. We had some players step up and we got out of there with a win.”

Davie trailed 38-36 in the third quarter when it finally turned the screws on an opponent that fell for the fifth time in a row. After piling up 66 points in the previous three games, Jackson Powers was great again. The big man accounted for 10 points during a 15-2 run that bridged the third/fourth quarters and staggered the Pioneers (3-5) at 51-40. They never got closer than six the rest of the way.

Powers had 18 points, 15 rebounds, four blocked shots, two assists and went 6 of 6 from the free-throw line.

“Jackson is playing good ball,” Pittman said. “They started three guys over 6-5, but he’s been handling his own against everybody, to be honest with you.”

“Braddock did a lot of things well,” Pittman said. “I told him we need high energy coming off the bench.”

Davie faced a 17-11 second-quarter deficit at Central Davidson on Dec. 20, but a major run changed the game as Davie put the brakes on Central’s five-game winning streak.

“We held up well under adversity,” Pittman said. “We did not let the way the game was being called distract us from being focussed and locked in.”

Lawhon, Powers, Williams and Koontz delivered baskets during the 14-0 run in the second quarter. The Spartans showed fight by climbing within 42-36 in the third, but Davie was ready to answer. Ratledge sparked an 11-2 run by making a 3-pointer on his first shot attempt of the night, and moments later, he hit another from long range. Lawhon was fouled on a 3-point try and converted all three free throws. Then Lawhon got a steal, was fouled and hit both foul shots to put Davie in command at 53-38.

The Spartans (7-2) did not quit, cutting the margin to 62-56, but Lawhon, Coleman and Williams closed the door by hitting a combined 13 of 16 free throws.

“After the first quarter, we played really well,” Pittman said. “It was a good, solid win. We were the first team to beat them at home this year.”

Davie’s attack was powered by Lawhon (26 points) and Williams (21). Lawhon hit 6 of 12 field goals, 12 of 14 free throws, grabbed five rebounds and dished out four assists. Williams, who regained his form after battling the flu and being held to 14 points over the previous two games, had seven boards to go with his scoring total.

“Coleman was making great decisions,” Pittman said. “When we needed someone to pick up the intensity, he got us going by using his off-the-ball game, his dribble game and setting up teammates.

“Hayden played well. He got his rhythm back after being out with the flu.”

And then there was the relentless Powers, who turned in a double-double with 10 points, 13 rebounds and two blocks.

Ratledge and Coleman (6-6 FTs) had six points each, and Koontz had two points, nine rebounds and two assists.

Although Davie and the visiting Rams provided a lively crowd with a lot of drama on Dec. 21, Davie’s double-overtime victory was far from pretty. It was fortunate to escape against a 1-A opponent.

“We’re still looking at a team that is growing,” Pittman said. “I’m still very realistic and we’re young. We have guys that haven’t been in double overtimes or been in clutch situations or played in front of this many people that’s coming to support. So it’s bright lights.

The War Eagles (8-2) had a dreadful start. When they were down 10-0 in the opening minutes, Pittman had already gone nine deep into his bench, trying everything to find a spark. When the deficit was 12-0, ice-cold Davie was 0 for 10 from the floor, 0 for 5 from deep and 0 for 2 from the line.

The desperately-needed spark came from Coleman, who put Davie on the board with two free throws with :15 left in the first quarter. Coleman hit a buzzer-beating 3 to close the quarter. Early in the second, he hit another 3 to make it 14-8. The reserve sophomore had all eight Davie points.

During the comeback, Davie benefited from another reserve. Burke Rosenbaum buried a triple on his first shot. Powers followed with a 3. Then Rosenbaum hit another 3 as Davie converted five straight shots from long range.

Thanks to the bench, Davie’s halftime deficit was only 25-23.

“I am super proud of Braddock, Gavin (Reese), Burke and Landon (Waller) for coming in and changing the dynamic of the game – just playing hard and playing like it means something to them,” Pittman said.

Davie appeared to be in control when Ratledge’s 3 made it 41-31, when Coleman’s steal/layup made it 43-33 and when Powers’ basket off a Lawhon inbounds pass made it 52-43 in the fourth.

But the unflappable Rams (5-3) clawed their way back. They closed regulation with a 10-1 run, while Davie was turning it over and missing the front end of one-and-ones. Starmount’s Jadon Hurt Bailey, who had made one field goal all game, banked in a buzzer-beater 3 to tie the game at 53-53 and force the four-minute overtime.

With :22 left in the first OT, Lawhon stepped to the line with Davie trailing 59-57. His first attempt swished. He received some holiday kindness on his second try, the free throw hitting the front of the rim and rolling in to tie the game. Starmount’s potential game-winner was off the mark and Rosenbaum secured the rebound with 1.8 seconds on the clock.

In the second OT, Davie had missed eight straight field goals before Lawhon – hallelujah! – buried his third straight 3 to give Davie a 62-59 lead. Moments later, two War Eagles trapped a Ram under the Davie basket. Lawhon reached up and batted the pass. Lo and behold, the deflection went right into the goal to make it 65-61. Then a Powers 3 put it out of reach at 68-62.

Davie did just enough, and in a subdued locker room, Pittman wasn’t happy with his team nor himself.

“I blame myself because I didn’t come in this morning,” he said. “We should have come in and got shots up, and we should have thought about the process of getting focussed in. I blame myself because I feel like I let us down. I don’t think we were prepared the way we should have been prepared to play a team with juniors and seniors. The way the stars are aligning this year, we’re going to play a bunch of senior-led teams, and I’ll own this one because I feel like we came out flat. It’s time for me to go back to the drawing board and mix some things up.