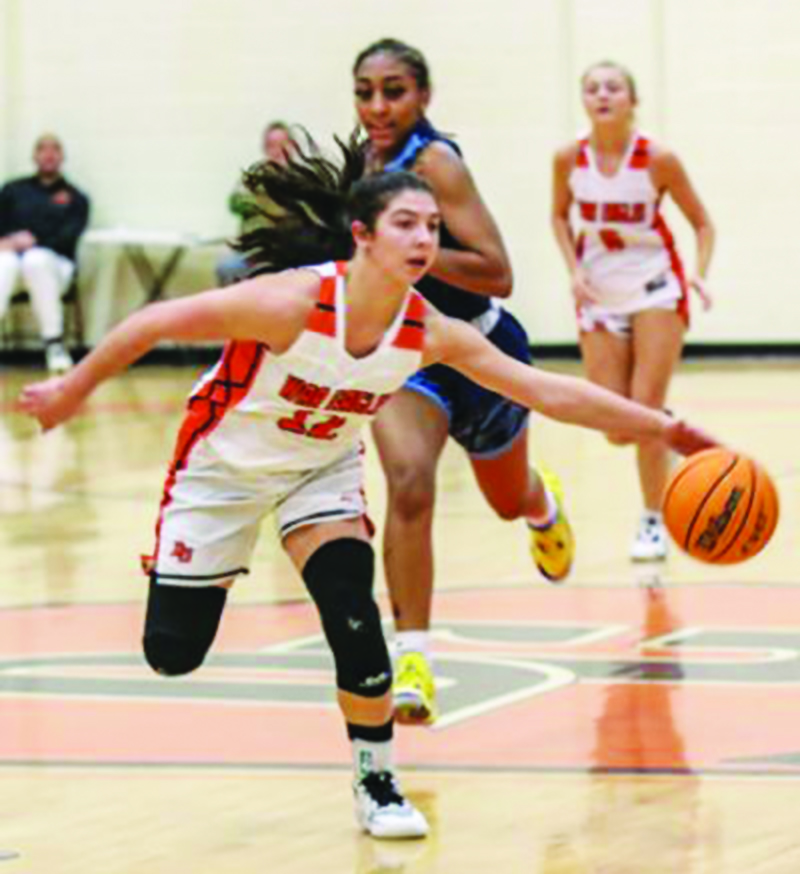 Somer Johnson came up huge and the Davie varsity girls basketball team picked up a much-needed win over Reagan on Friday.

Before that, the War Eagles were stuck in a four-game losing streak. Playing five teams (Forbush, West Rowan, Atkins, Reynolds and East Forsyth) that have a combined 36-10 record led to some low moments. Sydney Dirks and the War Eagles played exceptional on the defensive end at East Forsyth on Dec. 13, but the offense struggled mightily in 48-36 defeat.

“The scorebook does not do it justice because we played our butts off,” coach Lindsey Adams said. “It’s not what we wanted offensively. We missed a lot of open looks and turnovers in the first quarter killed us. But once we settled in, we destroyed it (on defense).”

Dirks embraced a challenging defensive assignment against La’Niya Simes, who did not hit a field goal all game. That’s stifling D.

“Sydney played a box-and-one on No. 11 the entire game,” Adams said. “She was (Central Piedmont Conference) player of the year last year, and we held her to six points (all on free throws). She is averaging a double-double (including a 19-point scoring average). I’m very proud of that. We will keep working and it will all come together.”

East, which shared first place in the regular season with Reagan last year, improved to 6-1 overall and 2-0 in the CPC.

Johnson’s shooting galvanized Davie in the first quarter, Colamarino played suffocating defense on Reagan’s big girl and the War Eagles took advantage of a redemption opportunity against the visiting Raiders on Dec. 16.

“We start every game like we’re 0-0,” Adams said after Davie stopped the losing streak at four and beat Reagan for the first time since 2018-19. “Obviously we were 2-5, but I think we’ve had the toughest nonconference schedule of anybody in our conference, and I think people still underestimate us as a program.”

Davie, which was averaging just 37 points during the slide, needed a jolt. Enter Johnson. In the opening minutes, the senior was electric putting the ball in the hoop.

On the game’s first possession, Johnson cut toward the basket and Rankin fed her. The result was an and-one and a three-point play. That was a sign of things to come.

Johnson received a pass on the left wing. She got a screen from Colamarino, dribbled to the top of the key and buried a 3-pointer. After Reagan rallied from 8-2 down to 8-8, Aderhold threw a skip pass to the left wing to Johnson. Colamarino set another screen and Johnson nailed the triple.

Later in the first quarter, Colamarino rebounded her own miss and hit Johnson at the top of the key. The 3 swished as Davie took a 14-8 lead. Johnson had 12 of the 14 while hitting 4 of 5 shots, including all three of her long-range attempts.

In the second quarter, Johnson drove, banked it home as she was fouled and hit the free throw to give Davie a 22-10 lead.

Davie built a 31-20 halftime lead by hitting 5 of 8 3s. Aderhold and Oakes had the other two triples.

In the third quarter, Johnson banged her fourth 3 of the night even though she was knocked down by an aggressive box-out. That gave Davie its largest lead of the game, 43-25.

“Malayka’s been leading us in scoring the past two games, but Somer had a hot night,” Adams said. “We have a first period basketball conditioning class and they’re required to get shots up every single day in an hour-and-a-half class. Somer’s the type of player that once she makes one, her confidence goes up. When she made that first one, she was locked in and ready.”

Colamarino’s defense on Reagan senior Emma Pendleton helped carry Davie to the finish line. Pendleton finished with 13 points, but she could not get going in the paint against the Davie junior. Pendleton hit 4 of 9 field goals and 5 of 6 free throws. She only managed two FGs when guarded by Colamarino.

“Lauren stepped up and guarded the biggest player on the court for the second straight game,” Adams said. “Even though Lauren is not scoring (a lot), defensively she’s keeping their big girls (contained), which is something we haven’t had in the past because we haven’t had a (true) post. I think (Pendleton) had 18 points on us last year. She had 13 tonight, but if we didn’t have Lauren, it could have been a whole different ballgame. I told my guards to press up and let Lauren hold her own and don’t help.”

Although Adams is excited for where her team can go from here, it was a mostly uneventful second half. The War Eagles’ lead never dipped below 10, but Adams felt the intensity was not the same as the first half.

Gentry had nine points and four steals. Aderhold had seven points. Rankin had five points and four rebounds. Colamarino had four points, seven rebounds and two assists. Oakes had three points, while Dirks and Spaugh had two each.