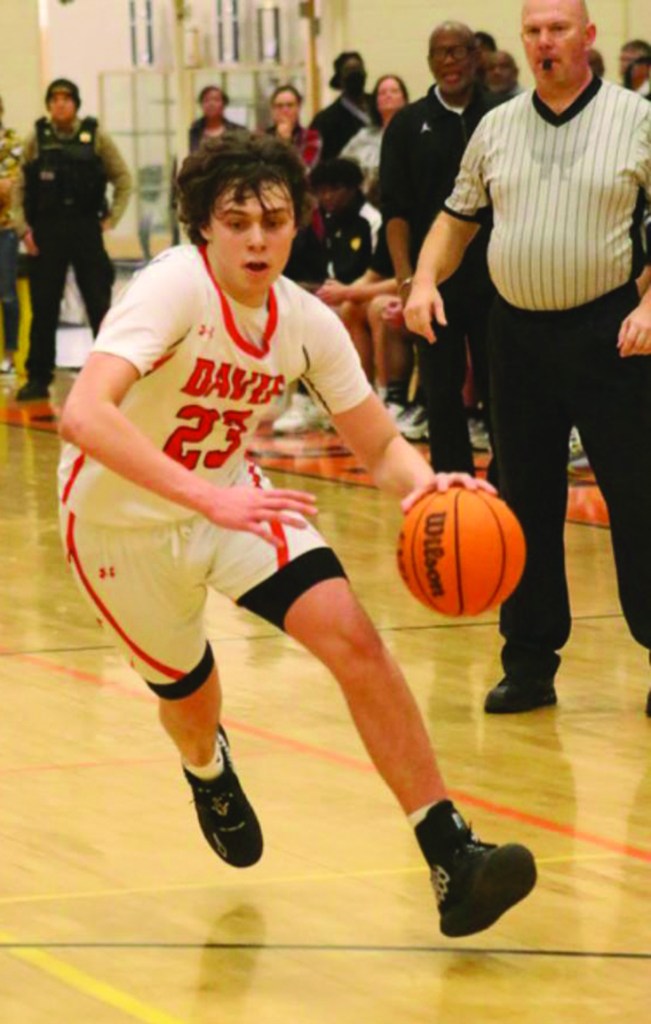 There was the dream start to the season. Then there was the humbling stretch. Now Davie varsity boys basketball coach Josh Pittman has problems to figure out.

“It’s like humble pie,” he said after last week’s Central Piedmont Conference losses to East Forsyth and Reagan. “Now I get to see if we’re going to react accordingly and get more emotion in what we’re doing. Because we didn’t look engaged in the last four minutes (against Reagan), and that bothers me more than the outcome of the game. I don’t mind losing; we’re not going to win all our games. But you can’t lose to the point where you’ve got one or two players playing hard. That can’t happen.”

The War Eagles carried a 5-0 record to East Forsyth on Dec. 13, but they hit their first speed bump while playing without Hayden Williams, who was averaging 14 points but was home with the flu. What’s more, they had to play most of the second half without Coleman Lawhon (14.4 ppg), who fouled out in the third quarter.

Despite those obstacles, Davie had a chance because Jackson Powers caught fire.

Davie had a lackluster start to the game, trailing 9-0 before Ethan Ratledge got his team on the board with a 3-pointer. What followed was a stunning 17-2 run by Davie that spanned the first and second quarters.

Powers scored and then Burke Rosenbaum hit a 3. Lawhon got his defender in the air with a pump fake and hit a 3 as he was fouled. He finished the rare four-point play at the foul line. Powers sandwiched two baskets around another Lawhon 3, and Davie went from 19-10 down to 27-21 ahead.

“We were playing good basketball,” Pittman said. “People probably thought they were going to basically just walk all over us. That was the talk I had been hearing. I knew once we settled down and made some shots, we would be fine.”

Davie held a 34-33 lead at halftime behind Lawhon’s 12 points, Powers’ 10 and 51-percent shooting. But a turning point was Lawhon’s third foul late in the second quarter.

The third quarter started promising for Davie. When Powers popped a 3, Davie had a 37-33 lead. But Lawhon got his fourth foul when it was 38-37 East, and he went to the bench. Pittman put him back in when East surged in front 43-38, but Lawhon fouled out with Davie behind 45-40 with 1:40 left in the third.

“I still feel like we had chances,” Pittman said. “We missed two many free throws. Even when Coleman fouled out, we still had a four-point game at various times and we were at the line (with an opportunity) to cut it to two. In that stretch, we missed seven or eight free throws. That caught up with us.”

At one point, Powers converted nine of 13 shots. He finished with 23 points, 10 rebounds and two blocked shots. He accounted for 13 of Davie’s 23 second-half points.

“He played a lot on the block,” Pittman said of the 6-6 sophomore. “We kind of played off of him on the block because of the way East was switching everything. So it was running motion until we could get it to the block.”

But  the defending CPC champion weathered Davie’s 17-2 storm and ended Pittman’s 23-game winning streak in the regular season, including 18 in a row last year as coach at Winston-Salem Prep.

“Overall, it was a great game, and we definitely had a chance to take that game,” he said. “All you want to do on the road is put yourself in position to win.”

In front of another electric atmosphere in Davie’s gym on Dec. 16, Powers always knew when to step up, the big man scoring 47 points in two games. Ratledge did not miss a shot on the way to 12 points. That was good stuff.

The downside: Those performances were spoiled by a tough, physical Reagan team that is senior-heavy. Caleb Ellison, a 6-1 senior guard, was lethal with 24 points and 10-for-10 shooting from the foul line. Cooper Jackson, a 6-6 junior, was a dunking machine in the fourth quarter. He scored 19 of his 21 in the second half, threw down seven dunks and Reagan disappointed most of the fans.

“That’s huge,” Pittman said when asked about Reagan’s seven seniors. “They have players who have played varsity for three or four years. They know what they’re doing. They’ve got grit about them. They’re smart. They know how to take their time and play for each other. And they excel in the helter-skelter game. When we were able to sit down and play our 2-3 (zone), we turned them over a little bit and made them force some shots – even though they made some tough ones – and I felt like we were in the game.”

Davie’s only lead of the game was 4-2, but Reagan’s biggest lead in the first half was only six. Powers and Ratledge combined for 21 first-half points on 9-of-12 shooting. (The rest of the War Eagles shot 2-14.) That duo had Davie within striking distance at 37-31.

“We really couldn’t run our offense because we weren’t setting screens due to them being physical,” Pittman said. “They were throwing little elbows, little shoulders, little cheap shots here and there. That’s what you call a rivalry, and that’s what you do in a rivalry game. And we have to step up and react – and we just didn’t.”

“We were in the game, but then it looked like we were sapped of energy,” Pittman said.

Powers continued his stellar play with 24 points, six rebounds, two blocks and two assists. His 9-for-16 shooting raised his team-high average to 17.5 points. Ratledge’s performance stood out as he scored 12 on 5-5 shooting.

Lawhon hit 8 of 9 free throws to score 10. Williams also had 10. Koontz and Coleman had four each and Reese had one.