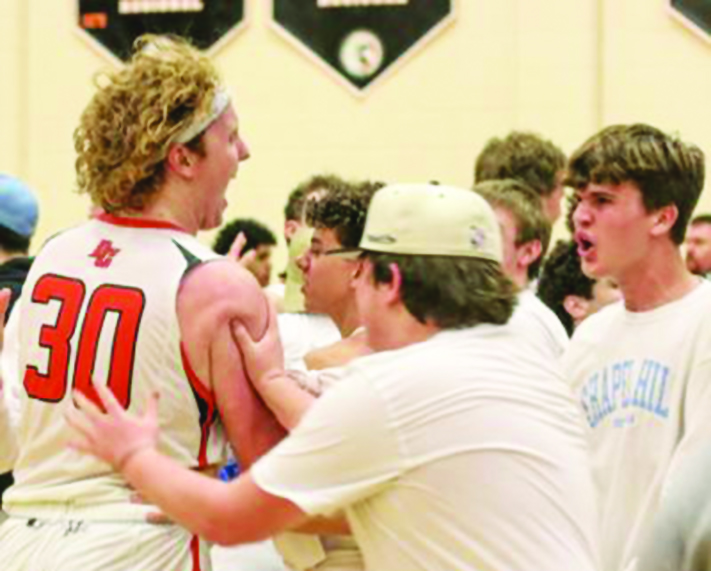 They didn’t worry when Jackson Powers picked up his fourth foul. They didn’t fret when Coleman Lawhon left with a cramp in his leg. (That’s the top two scorers we’re talking about.) They didn’t wilt when the Demons took their sixth four-point lead of the game late in the fourth quarter.

Demonstrating composure, guts and poise, they won 64-58 in a finish for the ages – Powers hitting a go-ahead 3-pointer with 15 seconds remaining, Hayden Williams stealing a pass on Reynolds’ final possession and screams of jubilation punctuating the night.

“God is amazing,” coach Josh Pittman said after Davie improved to 4-0 overall. “The continuous grind and the work they’ve put in keeps showing up. They played hard and they stuck with it. They kept believing in each other, they kept making the extra pass and most importantly, they kept playing defense. I tell them if we keep teams under 60, our chances to win go up 10 times higher. We didn’t shoot it that great, so that’s a testament to our defense.”

Davie raced to an 8-3 lead, but neither team could ever achieve any significant separation, and late in the second quarter the Demons had a 27-23 lead. Davie’s bench showed up again. Moments after checking in for the first time, sophomore guard Braddock Coleman split a double-team – the athletic Demons full-court pressed all game – and fired a long pass to Ian Koontz, who finished inside. Seconds after entering the game for the first time, sophomore Landon Waller scored to cut Reynolds’ lead to 29-27.

The War Eagles only managed 36-percent shooting in the first half, yet trailed just 31-27 at halftime. Powers, who came in averaging 17 points a game, had one point at intermission, but Koontz picked up the slack by scoring six.

But Davie’s star of the game for the first three quarters was Lawhon. The point guard had Davie’s first 10 points of the second half. He stole an inbound pass and hit a breakaway layup. He scored after beating the press by himself. He scored inside before hitting a 3, his fourth straight successful shot providing a 37-36 lead.

“As I continue to tell anybody that listens, in my vision Coleman is probably the best point guard in the CPC,” Pittman said. “They won’t say it and they won’t give it to him, and I told him he has to go earn it.”

With six minutes left in the third quarter, adversity struck the War Eagles. That’s when Powers picked up his fourth personal and headed to the bench. With three seconds left in the third, Lawhon suffered a cramp and had to limp off. He returned at the 7:28 mark of the fourth but left for good at 7:04.

In three quarters of action, Lawhon poured in a game-high 23 points on 9-of-16 shooting, a new varsity career high, and made four steals. With the head of the snake sidelined, Davie needed somebody to step up. Several somebodies stepped up. Among them was Waller, who played six and a half straight minutes until Powers returned with 7:28 remaining.

“I knew it was going to be tough, but I know the way they practice and the way they’re coached to play,” Pittman said. “It’s a team game, so it’s the next-man-up mentality. When you play and practice a team game with motion and swinging the ball, players can step up in those moments because it’s about everybody making big shots. I have told (Waller) you never know when your time is coming.”

Ethan Ratledge and Burke Rosenbaum provided a lift. Late in the third, Ratledge nailed a corner 3 to tie the game at 40. Rosenbaum’s first points came on a triple that gave Davie a 43-40 lead.

At this point, things were bound for a photo finish. Reynolds (4-3 overall) had a four-point possession to regain the lead, but Lawhon answered with an and-one to put Davie ahead 46-44.

A 3 produced a 51-47 lead for Reynolds, but Davie wasn’t rattled. Powers scored inside as he was fouled to make it 51-49. Reynolds went up 53-49, but Williams hit two free throws. When Trey Tisdale, a 6-5 senior, flew down the baseline for Reynolds’ second dunk of the night, the Demons had a 55-51 lead. But Davie kept fighting.

Ratledge buried a 3 from the left corner with 2:25 to go to cut the margin to 55-54. That made the junior lefty 3 for 3 from deep. It was a massive boost from a guy who scored nine points across the first three games.

“Coach told me to be aggressive in looking for my shot, so that’s what led to it,” Ratledge said.

“Ethan’s shots were on today and we kept feeding him,” Powers said. “It was wonderful.”

“It’s about him believing in what we’re telling him he is,” Pittman said. “Ethan can be one of the most dominant players on the court because he can do it all. People just don’t know he can do it all because he doesn’t show it. He started going downhill, moving, passing and coming to the ball. He was making the right pass, and that doesn’t always show up on the stats.”

The terrific back-and-forth battle raged on. Ratledge dished in the corner to Rosenbaum, who was 1 for 5 until it was clutch time. His 3-ball splashed at 1:02 to give Davie a 57-56 lead.

“It’s very rewarding to win those close games because it’s difficult to win, especially in conference,” Rosenbaum said. “We work hard every day in practice to have a next-man-up mentality, so whoever comes off the bench is ready to go.”

The see-saw affair saw Reynolds 6-10 senior Wyatt Mowery score from the low post to put the visitors in front 58-57 at :54. When Davie missed the front end of a one-and-one at :39, Reynolds was in the driver’s seat.

During a timeout, Pittman ordered a 1-3-1 trap. Rosenbaum and Gavin Reese double-teamed the ball handler near halfcourt and forced a turnover, the Demon stepping out of bounds at :26. Davie had new life.

Following a timeout, Reese, a cool freshman, brought the ball upcourt. He drove left and got all the way under the basket. Just before running out of room, he threw a pass. Ratledge came to meet the ball in the lane and immediately swung it to the top of the key. The defender moved to the wing to cover Williams and left Powers open. Although he had only made one field goal all night, Powers drilled a go-ahead 3 that made it 60-58 at :15.

It’s one of those moments fans will remember a long time. Powers will treasure it forever.

“The guy was on my right side and the lane was open,” Reese said. “A guy helped and I saw Ethan open. They helped on Ethan and then Jackson was wide open. I knew Jackson would hit that.”

“We kept doing the penetrate-and-kick, and that was the idea on the last play,” Ratledge said.

“I wasn’t shooting good at the beginning,” Powers said. “Coach Pittman believed in me and said keep shooting, keep shooting. Finally I found my opportunity.”

Powers’ shot inspired a jubilant scene even though plenty of time remained for Reynolds to steal it right back.

“That’s motion,” Pittman said of the game-winning play. “Jackson shot one earlier but he passed up four. I said: ‘Jackson, I believe in you. If you miss, you miss. But go down fighting. It’s going to fall.’ I knew when he caught it and set his feet it was going in. He probably understands now, I’m never going to say anything to you as long as you’re doing everything within the team framework. I don’t care if you shoot 30 3s. If you move, move, move and your feet are set, let it fly.”

Then it was Williams who finished the Demons. The Reynolds dribbler rushed the ball down the court. He tried to feed the low post with a bounce pass, but Williams intercepted and sped the other way. A Demon caught him from behind and fouled at :06. The officials got together and ruled an intentional foul, meaning two foul shots and the ball.

Williams hit both to make it 62-58. Reynolds fouled again and Williams hit two more. All four free throws barely touched iron. The horn sounded and the War Eagles did the jumping-and-hugging thing and beat their chests.

They just made themselves a threat against every CPC rival.

“I’m proud of all of them for starting to see their potential and believing in themselves the way we believe in them,” Pittman said.

How did the War Eagles win a game that featured five ties, 17 lead changes and no lead larger than six? How did they beat the odds with Powers hampered by fouls and Lawhon hurting? How are they 4-0? Ball movement, a full commitment to playing for each other and an outrageously impressive coaching job by a staff that arrived last summer.

“I feel like this team can compete and play with anybody because of the way we work, the way we practice and I have 10 selfless guys that support each other through thick and thin,” Pittman said. “That’s the part I love.”

• Filling in for Lawhon, Reese had as influential a scoreless-without-taking-a-shot game as you’ll find. Powers said: “There was a lot of pressure on Gavin, but he pushed through that pressure and got it to open guys.” Pittman: “Gavin ran point guard for the last 15 minutes and didn’t have a turnover.”

What did Reese have to say? “At the start, it’s some nerves,” he said. “But once you get out there … I try to make sure I’m locked in and not paying attention to the crowd. I just focus on facilitating and helping us win.”

• Even though he did not get in the game, CJ Phelps earned praise from Pittman. “He was huge because he was on the bench yelling, being positive and clapping the guys up when they came out,” he said. … Davie had lost six of seven to the Demons, who had between 6-14 points from six players. … Davie’s only other win over Reynolds in recent history was 61-59 last year when Lawhon hit a 3 with three seconds left. … In the second half, Davie hit 11 of 23 shots, including 6-13 3s. … When asked about Lawhon’s cramps, Pittman said: “I tell him that’s part of being a star player. You’ve got to take care of your body. I said: ‘I need to see everybody with a jug of water tomorrow.’”

Instead of suffering a letdown the following afternoon, the War Eagles kept their foot on the gas in Saturday’s nonconference game at Atkins (0-7). They rose to 5-0 for the first time since 2018-19 when Williams and Rosenbaum were eighth graders.