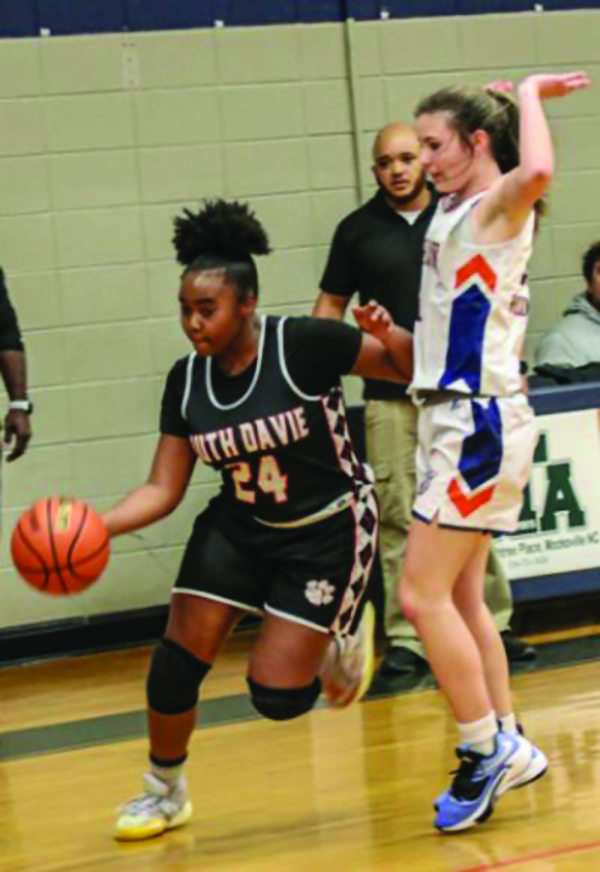 It wasn’t that the Ellis girls basketball team beat Phoenix Academy – the Jaguars have an experienced team that expects to win – it’s how it happened.

Behind by nine in the third quarter, they looked destined for their second loss in three days. Remarkably, they would win by eight. Emmie Burris and Gracyn Coleman willed Ellis to its fifth win in six games.

“The home crowd was electric and fed the Lady Jags energy as we wore down an already tired Phoenix team, never allowing them to get the ball much past halfcourt the last three possessions,” coach Susan Jones said after a 36-28 win on Dec. 8.

Two days earlier, the Jaguars fell flat at Summit, losing 44-31. The perfect record was over. Before this, Ellis’ closest margin of victory was 18. Before this, Ellis was allowing just 16.7 points per game. The Eagles topped that mark by 27.

“This loss was a very frustrating game for a number of reasons, but the one that really mattered and affected the outcome was the fact that we did not play our game offensively at all,” Jones said. “I am not taking away any of the credit to Summit. They are a good team. But they are beatable and our girls saw it. To win, we need all our girls scoring a few.”

The loss overshadowed an offensive coming-out party for Coleman, who nailed three 3-pointers, scored 11 points and made six steals. She’s always been an absolute pain to face as a defender, but now we’re seeing vast improvement from her offense. She came in averaging 2.7 points, with a high of nine. Last year as a sixth grader, she scored nine points in 10 games.

“Gracyn did a great job of containing their main scorer, and she was probably our one player who felt confident shooting,” Jones said.

Kayden Richardson (11 points, 10 rebounds) had a double-double. Burris and Olivia Smith had six and three points, respectively. Summit was carried by one player who scored 24.

Coleman’s big game at Summit carried over as she delivered nine points in the first quarter against visiting Phoenix Academy.

Unfortunately for Ellis, it would trail 15-12 at halftime, partly because of Richardson’s foul trouble. Things got worse early in the third quarter, when Phoenix pushed the margin to 21-12.

“We called a timeout to regroup, and this time the girls came out increasing their defensive intensity,” Jones said.

From that point on, the Jaguars played fearlessly, especially Burris and Coleman, who changed rain to sun as Ellis notched a heart-warming win.

“Our defensive pressure amped up, led by Emmie and Gracyn,” Jones said.

Richardson’s layup made it 32-28. Smith supplied the icing on a pair of breakaway layups that were set up by Ellis’ defense.

Coleman, who has earned the nickname “Honey Badger” because of her tenacious defense, finished with 12 points and seven steals. Burris, who was responsible for seven of Ellis’ 15 points in the fourth, had 10 points and five steals.

“And Gracyn has done all this with an injury,” Jones said. “She refuses to rest until Christmas break. She did most of the heavy lifting defensively on their leading scorer, who has some handles and can ball. Gracyn held her to nine points.”

After dropping the first four games, South Davie had something to smile about during a home game against Millennium Charter on Dec. 5. Not only did the Tigers break through, they won with some oomph.

“Man, they were so excited,” coach Brandon Gentry said. “They have the heart. The biggest thing is my team has a big heart. As long as they keep getting better everyday, they’re going to be successful.”

Londyn McDowell and Aryanna Warren were mostly responsible for South’s renewed motivation. Coming off a career-high 13 points in a two-point loss to North Davie, McDowell set another career high with 18 against the Lions. How much has she improved? Her scoring high a season ago was five.

“Londyn had her best game since she’s been playing basketball in the sixth grade,” Gentry said. “I’ve had her since the sixth grade and we’ve been trying to get Londyn to do what she did (vs. Millennium). She realized her potential down low. She took care of the ball. She was doing some great post moves. She was getting rebounds and putting them back in. She was doing everything you could ask for down low.”

Warren was also coming off a career high (eight) against North Davie, but she took her game to another level with 17 against the Lions. Her best offensive effort last year was six.

“We transitioned her from shooting guard to point guard, and she took it by storm,” Gentry said. “She handled the pressure, she brought the ball up and she was hitting pressure shots. She was basically running the show. I told her the point guard makes everybody around her better, and she took that and ran with it.”

The Tigers continued to redeem themselves at Canterbury on Dec. 7. They took control in the second quarter and cruised to victory.

Alston enjoyed her finest hour at South with 11 points. Warren also had 11.

“Harmoni had a great game, and this is just the beginning,” Gentry said of the guard. “I told her to believe in herself, stay calm and you will do fine. She is starting to get the feel for the game.”

Vaughters had six points. Scarlett Brock and Perez had three each. Alleson Cothren and McDowell had two apiece.

The Wildcats took care of Millennium in the first quarter. Gavura, Martin, Ratledge and Parsons all scored at least four points in the opening seven minutes to stake North (3-2) to a 17-3 lead.