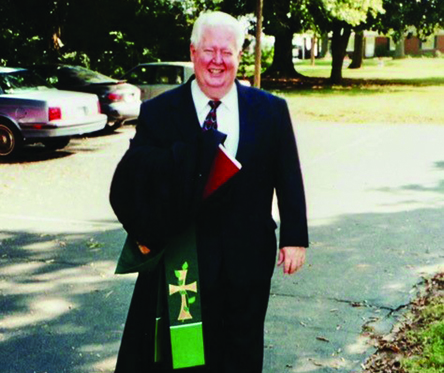 Born to Charles and Catherine Turner in Gastonia, Charles grew up on the family dairy farm in Reidsville, surrounded by 2 younger sisters, Mary and Rosie, and a younger brother, Jim.  He graduated from Reidsville High and began his collegiate journey at N.C. State University before joining the U.S. Air Force. While stationed at McCoy Air Force Base in Orlando, Fla., he met his true love, Constance Lee. The two were married the following year in 1963.Shortly after this marriage, he was deployed to Korea and then Vietnam, where he served as a Chaplin’s Assistant. After returning to the states, he completed his undergraduate education at Pfeiffer College, before enrolling at Duke University, where he graduated with his Master of Divinity.  Following his ordination as a United Methodist minister in the Western North Carolina Conference – he served 11 churches over the course of 43 years.

He had two children, Charles M. Turner III, who was born in Edinburgh, Scotland – while he was studying at the University there, and Christina Michelle Turner, who has born in High Point – while he was serving at his first church.

A funeral service will be conducted at 2 p.m., Monday, Dec. 19 at Mitchell’s Chapel United Methodist Church in Boonville, with Rev. Rebekah Ralph officiating.

Memorials may be made to: Trellis Supportive Care, 101 Hospice Lane, Winston-Salem, NC 27103.