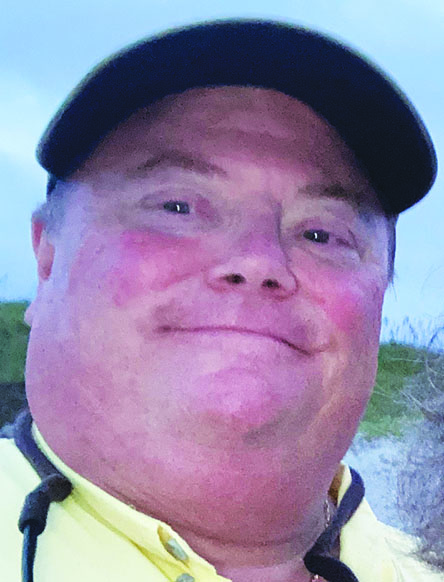 Kenneth Russell Bicknell passed away after a valiant battle with Esophagus Cancer.

He was born June 15, 1959 in Cincinnati, Ohio to Richard Allen and Gayle Crawford Bicknell, who predeceased him as did his brother Jeffrey.

He leaves behind: his loving wife, Anne Gould of the home; his brother, Rick (Linda) and niece Hannah of Tucson, Ariz.; his stepson-in-law, Leroy Owens of Edenton; his granddaughters, Maggie and Shelby Owens of Edenton, who he adored; and his best friends, Keith Hendrickson and John Crocker.

Ken had a full life made better by his love of nature and the outdoors. He spent hours on his kayak fishing in local lakes and streams or in creeks in Eastern NC. He always had a retriever at his feet and expects to meet his beloved Raider, Bubba and Scooter at the Rainbow Bridge.

In recent years, he rediscovered a love of ice hockey and was referred to as the No. 1 Fan of the Carolina Thunderbirds.  He loved visiting Ocracoke Island over the years and was proud to have caught a red drum on a fly rod on Portsmouth Island.

Ken lived extensively in Lenoir and Greensboro before marrying Anne and moving to Mocksville in 2017. He was a 1978 graduate of Grimsley High School, and attended Chowan College. He had a diverse work history that included working as a charter boat captain, being a sound man for a rock and roll band before moving into retail. He worked his way up from a sales clerk to corporate buyer for Brendle’s Department store before working for the High Point Merchant’s Association and forming/managing his own business Triad Employment Staffing in High Point.  His last employment was with Lingo Staffing, who treated him like family.

He was a good man, a loving, loyal friend who made peoples’ lives better. Ken never knew a stranger and was a loyal friend to all he encountered.

He will always be my Pirate.

The family would like to thank the doctors and staff at Novant, GAP, Bayada Home Health and the Kate B. Reyonolds home for his care.

There will be no service at this time.