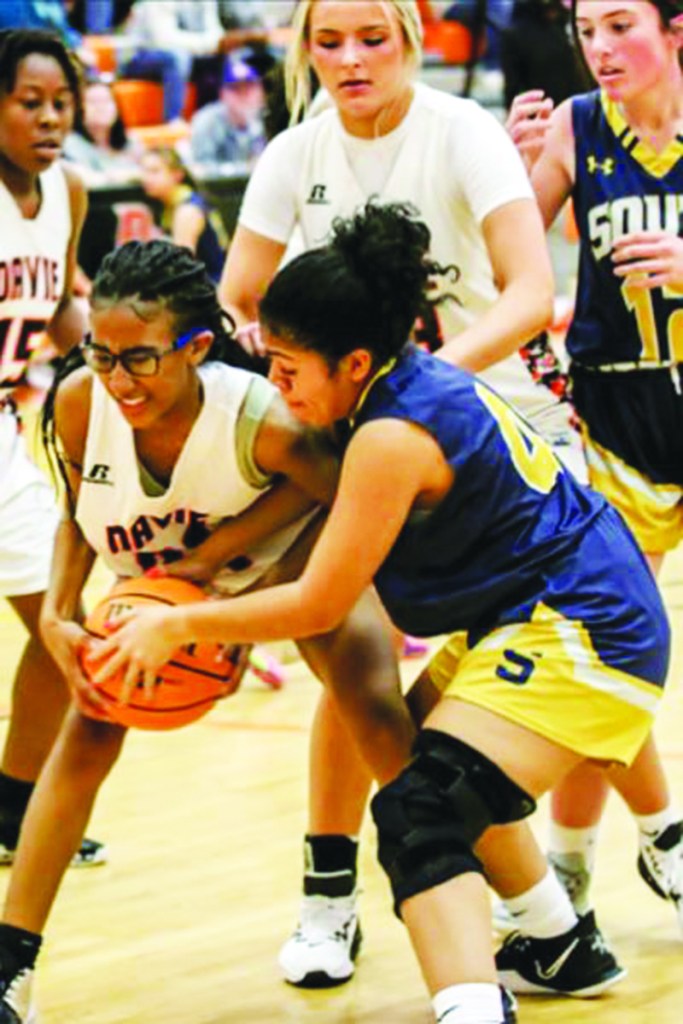 This was only the fourth game of the season, but the buzzards were already circling during the Davie JV girls basketball team’s home game against West Rowan on Nov. 30.

Not only was Davie 0-3, it looked bleak after the third quarter as Davie faced a 36-24 deficit.

So how did the War Eagles respond to that daunting challenge? They scored more points in the fourth (25) than they scored in either of the first two games (21 and 23) and won in shocking fashion, 49-45.

“After (the West Wilkes loss), Hope addressed the locker room and told them: ‘We need some heart. We need you to bring some heart to this team. If you’re not bringing heart, then don’t come back,’” coach Lamar Russell said of his new assistant coach, Hope Grimes. “I’m going to tell you, that fourth quarter was a lot of heart. These girls left everything on the floor.”

The War Eagles had no chance in the first two games, but they flirted with victory against visiting West Wilkes on Nov. 29. They trailed 21-19 going into the fourth. They were held to three points in the fourth, though, and lost 37-31.

Carleigh Croom had nine points and Britany Hernandez eight. America Stockton had five. Kaylee Lynch, who missed the first two games with an injury, made her season debut with five points and 12 rebounds. Tasia Tarpley had four points, five rebounds and five steals.

“We gave it away in the third, but we did play better,” Russell said. “We’ve just got to maintain. We played really well in the first half. We clawed back in the fourth and took the lead, but we didn’t play smart defense and fouls killed us (three girls fouled out). They were in the double bonus in the third quarter and that was a killer.”

The Falcons scored 17 of the 24 points in the third to take the 36-24 lead. But that bad quarter was erased by a fantastic fourth that saw Davie seize victory from the jaws of defeat.

“They poured it on us (in the middle quarters),” Russell said. “West Rowan is a great team. For us to get our first win against West Rowan, that’s big. That’s one of the biggest wins I’ve had (in two years at Davie).”

Croom delivered in a big way, scoring 22 points to go with five rebounds and three steals. It was a quite a performance from someone who had a high of 10 during her freshman year. It was a major breakout for someone who averaged 5.6 in the first three games.

“I looked at Hope and said Croom’s about to have a really good game,” Russell said. “And it kept falling for her. We tried to feed her as much as possible.”

Lynch and Hernandez came up big. In the final 30 seconds, Lynch stepped to the free-throw line with Davie behind 45-44. She drained both to put Davie ahead. Croom hit a free throw to make it 47-45. Hernandez broke West’s back by hitting an outside shot for the game’s final points.

Hernandez scored all 11 of her points in the frantic fourth, marking her third double-figure effort in four tries. Lynch combined eight points with her rebounding prowess (12).

“That was a confident shot (by Hernandez),” he said. “(Lynch’s rebounding) is a big part of why we have this win.”

Notes: Tarpley contributed seven points, six boards and four steals. Stockton had one point. … Davie weathered 38 points and four 3s from West’s do-it-all star. “She’s an amazing player,” Russell said. “She should be on varsity. She was shooting it from the volleyball line.”