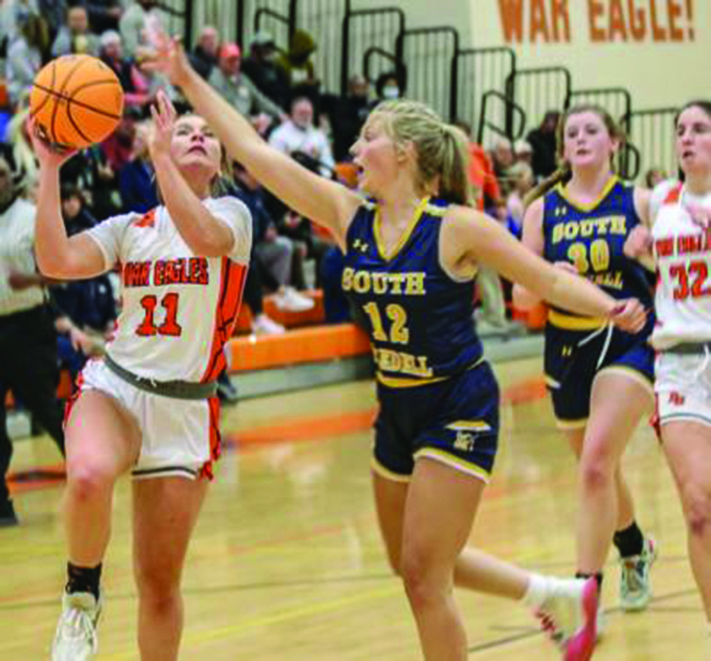 The Davie varsity girls basketball team won but the coach wasn’t thrilled with its overall play. That is not a sentence that has been typed in a while, because the War Eagles averaged just 4.5 victories over the past six seasons and every win was a good win for those work-as-you-go projects.

“We can do more,” Adams said after Davie opened the season with a 55-43 win over visiting South Iredell on Nov. 22. “I think we had some jitters because this was a pretty big crowd for a first game. I think that’s where all the turnovers came from. We did exactly what I wanted defensively, but we didn’t turn it into offense. We couldn’t settle down and show everything we’re capable of.”

On the other hand, we must note the War Eagles won comfortably with a shorthanded lineup. They were missing Kenadi Gentry, last year’s leading scorer, and Nadelie Jones. Even though Adams only had seven players at her disposal, each one contributed in a game in which Davie never trailed.

The lead was 20-17 in the second quarter when Davie took control for good behind Malayka Rankin, who knocked down a 3-pointer after Davie missed its first seven attempts from long range. Rankin scored seven straight Davie points to fuel an 11-4 run to close the first half. Lauren Colamarino was responsible for the other four as Davie took a 31-21 lead to the half.

Davie knocked South out with a 13-4 run in the third quarter. After Somer Johnson hit a pair of free throws, Rankin passed to Peyton Spaugh, who converted a tough layup. Johnson nailed a 3-pointer. Rankin scored while getting knocked to the floor, and she hit the accompanying free throw. When Johnson buried another triple, it was all but over at 44-25.

The highlights in the fourth were two beautiful backdoor plays between Colamarino and Johnson, who was on the receiving end both times as she cut to the basket for layups.

Rankin did not shoot well from the floor, but she made up for it by going 9 of 11 at the free-throw line. She finished with 18 points, six rebounds, three steals and two assists.

“I told her with her being such a dirty-work player, she’s going to get fouled and I need her to be good at the line,” Adams said.

Johnson, a college prospect, got her senior season off to a fine start by scoring 17 points to go with three assists and three steals.

Colamarino burst onto the scene after transferring from archrival West Forsyth, the junior compiling seven points, 12 rebounds, two assists and providing the inside component that has been sorely needed for years. She’s also skilled at handling the ball, and she got Davie’s offense set up numerous times.

One day later on the road, there was hope at halftime. Davie answered Forbush’s fast start with a 14-5 rally in the second quarter to trim the halftime deficit to 26-24.

But Davie was doomed by foul trouble. Four players (Aderhold, Johnson, Dirks and Spaugh) fouled out. That left Adams with four players at the end of the game. Oakes, Colamarino, Rankin and Tasia Tarpley were the only ones left at the end, and two of them had four fouls.

Adams was frustrated by Davie’s 31 fouls and Forbush’s 50 free-throw attempts. By contrast, the Falcons were whistled for 19 fouls and Davie shot 17 foul shots.

“We are the better team, but my girls have never been in that type of environment,” she said. “It was a playoff/championship-game type of environment. The fans were loud, the opposing student section was loud and rowdy and Forbush had the home-court advantage. My girls mentally struggled with that.”

Johnson (16 points) and Colamarino (14) carried Davie offensively. Oakes and Rankin had six each. Spaugh had four and Dirks three.

Forbush’s 22-point third quarter put Davie in a deep hole (48-35). Adams wasn’t happy with how Davie responded to the road pressure, but she does think the experience will benefit Davie in January/February.

“It was not the outcome we wanted, but it’s what we needed to experience if we want to make a good playoff run,” she said. “We have to learn how to handle adversity.”

Notes: While Gentry is expected back this week, Jones is out for six weeks. … Forbush outscored Davie by 15 at the line. Davie went 8 of 17 at the charity stripe, while Forbush went 23 of 50.