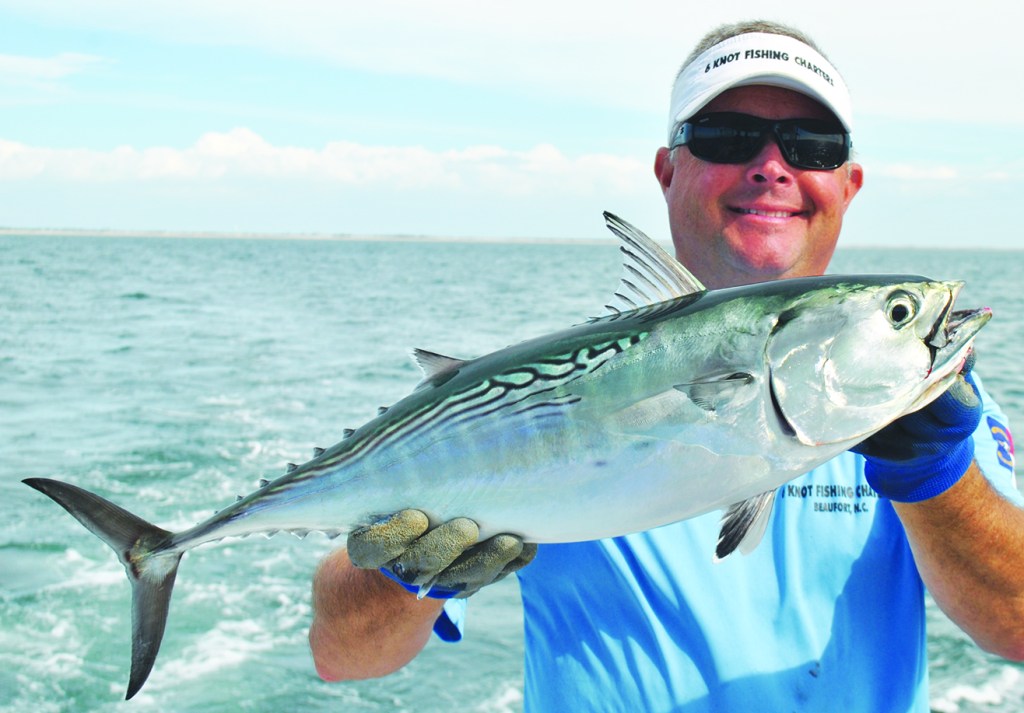 It only took Ralph Mason about 30 years of hard work to finally get his dream job. He throws his head back and laughs when he considers that irony.

Mason, 53, spent 28 years with the Winston-Salem Police Department after a couple of years in the U.S. Army, retiring 3½ years ago. Almost immediately, he moved to Beaufort and hung out his shingle: charter boat captain.

The owner of 6 Knot Fishing Charters, Mason splits time between Beaufort and Wallburg, runs an occasional offshore trip on the Sweet Deal, a 44-foot Hatteras sportfisher that belongs to a New London construction company owner, but spends most of his time on the Southern Breeze, a 34-foot Carolina Express sportfisher built by local boat-building legend Buddy Harris that he bought this past spring.

He’s crossing his fingers that he can build his charter service to the point where he fishes 75 to 100 days a year, trolling up and down the waters around Cape Lookout for Spanish and king mackerel, Atlantic bonito, false albacore, dolphin, wahoo, tuna and an occasional billfish. It’s a fitting next chapter in a life of fishing that went from bass to king mackerel and wound up involving everything in between.

Mason and his buddy, Matt Morgan – another retired WSPD officer – cranked up Southern Breeze and headed out of Beaufort Inlet toward Cape Lookout, where he had been catching a mixed bag of bluefish, Spanish mackerel, albacore and bonito for a couple of weeks.

Lines in, fish on. That’s pretty much how the day went for his fishing party, which boated six bonito, a handful of bluefish and 15 albacore ranging from 9 to 14 pounds.

In short, they got their strings stretched, and that left Mason beaming.

“You always have a dream job you want, and mine was to own and run my own boat,” said Mason, who grew up in Kernersville and graduated from East Forsyth High School in 1988.

“I came down here all the time; my dad has a place in Beaufort, and I could come and go, so when I retired in 2019, after I stayed with him for a while, I got my own place.”

Mason cut his saltwater teeth fishing with his father on king mackerel tournament circuits 20-some years ago. He got to know Dale McCorkle, who worked at Southern Marine in Salisbury before moving to Beaufort to become a charter captain.

One summer, when Mason was visiting Beaufort, McCorkle was in the midst of 20 straight days of charter fishing. He asked Mason, “You want to help me?” and Mason jumped at the chance, running three charters to give McCorkle some rest.

“‘You need to look into this,’” Mason said McCorkle told him.

In 2006, Mason sat for all the tests required to get his captain’s license, and he started helping McCorkle, taking advantage of his police schedule which bunched three or four days off around 5-day work stretches. He helped McCorkle until he sold his boat, and in 2014, he met Stan Bodsford of New London, who had bought a 44-foot Hatteras docked in Charleston, S.C. Bodsford wanted Mason to run the boat for him, and Mason agreed on one condition – that he move the boat to Atlantic Beach.

“After Hatteras and Oregon Inlet, we’re the second-best place on the whole coast to get to the Gulf Stream – 40 miles,” he said.

Mason arranged his schedule to be able to run the boat whenever Bodsford headed to Atlantic Beach and wanted to fish offshore, and he still does, eight years later. He has run offshore charter trips on Bodsford’s boat since he retired, for clients that want 12 hours on the water and a shot at some of the ocean’s biggest fish.

But getting his own boat was always a goal.

“I wanted a boat I could handle by myself, so I didn’t need a (first) mate,” Mason said. “A big sportfisher requires two people to run it, but a 34-(footer) is manageable for one person to run.”

Mason started looking last winter. He found Southern Breeze, which has a single Caterpillar 3126 engine that turns 420 horsepower, in Little River, S.C. According to Mason, Harris had built the boat in 2007, kept it a couple of years, donated it to a charity in New Bern, where it was purchased by a physician in New Bern. The boat moved to Norfolk, Va., a couple of years later, then to Little River.

“I went and looked at the boat, which had been moved to Shallotte, and as soon as I walked up on it, I knew it was exactly what I was looking for,” he said. “I knew I wanted a custom boat with a single engine, because I didn’t need all those extra things, like twin engines, with all the extra maintenance. I knew the charter business is a nickel-and-time operation; If you take care of one, good, single motor, you can do alright.

“I was looking for a Carolina Express type boat, and I knew the only people who made them were Buddy Harris, and a couple more people around Beaufort who were somewhat in the charter business.”

Mason got the financial end taken care of, thanks to a suggestion from the business-savvy Bodsford, and in February, he got it home to the Morehead City Yacht Basin. He’s run about two or three trips a week during the 2022 fishing season, in addition to the trips he’s run on Sweet Dream.

And now, he’s living his dream.