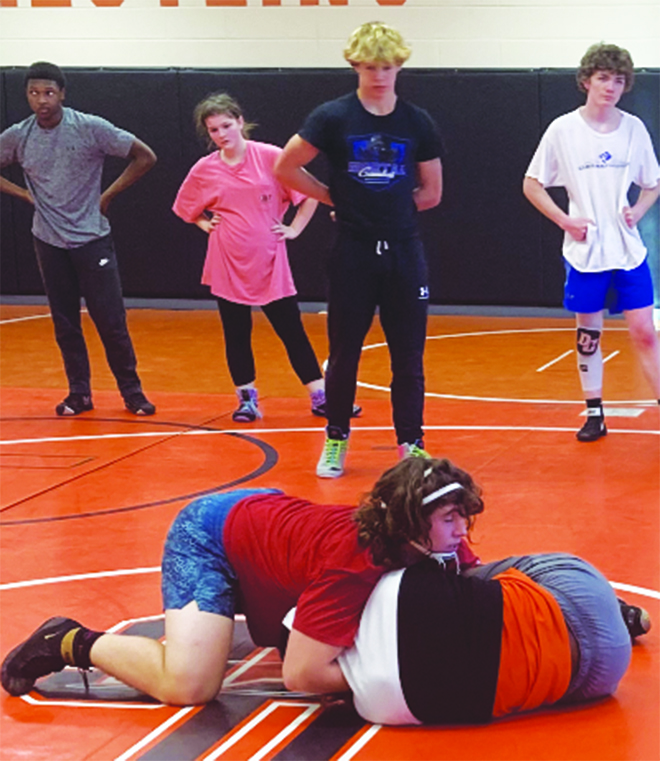 Contrast that with the fact that Davie has one senior in 2022-23 and only two returners who have achieved 30-plus wins in a season. Yeah, it’s true the tradition-rich War Eagles never lack for talent. New faces will emerge starting Saturday in the Buddy Lowery Invitational at Davie.

The bottom line: It will be difficult for Davie to pull off a season for the ages, but that doesn’t mean these are bleak times. The War Eagles will be just fine.

But we note that coach Perry Long always puts Davie in as rigorous a schedule as he can. It will take some lumps.

“At the beginning of the year, we may struggle,” assistant coach Mark McKnight said. “But like we always do, at the end of the year, we’ll be competing. We’ll be pretty good.”

“We’ll take some bruises for a little bit, but we’re going to be fine at the end of the day,” assistant Corbin Kopetzky said.

Davie has two dudes – Hunter Testa and Brysen Godbey – in the upper weights. Testa’s numbers the past two years are downright magical, especially when you consider his weight class as a freshman/sophomore (182). He comes into his junior year with a career record of 62-6, including a 34-3 mark as a sophomore when he captured the regional title and finished third in the state. He will be right back at 182 as a junior.

“His work ethic,” Kopetzky said when asked what separates Testa from the rest of the pack. “You’re not going to outwork him. He’s also very peculiar about hitting moves. He pays attention to the fine details. He will run things over and over and over until he’s got it down almost to a science.”

After enduring growing pains as a freshman at 220/285, Godbey was a dominant force as a sophomore, going 40-10 and qualifying for the state at 220. He has dropped down to 195 for his junior year.

“We’ve got to have something big out of him,” McKnight said.

At 132, the team’s lone senior, Lawson Hire, looks poised for a breakout year. He carries 50 career wins into the season.

“He’s looking good,” McKnight said. “He’s a lot stronger than he was, and he worked all summer to get better.”

Despite being an undersized freshman heavyweight, Ryder Strickland scratched and clawed and battled to a winning record (16-15). He has competitive fire and one thing is certain from a guy who closed his football season by butting heads with a five-star recruit when Davie lost in the playoffs at Grimsley: He will not back down from anyone.

“He’s gotten a lot stronger,” McKnight said. “He understands they’re going to try to pull down on him. I think he’s going to do really well this year. He has a great work ethic. He’s not tall and he’s going to get some 6-2, 6-3 guys that weigh 285 – but now he knows what to do with them.”

“He’s definitely improved in the past year,” Kopetzky said. “He’s got a shot to be pretty successful this year.”

Keep your eye on a transfer from Lake Norman. Brett Foster, who wrestled in middle school at North Davie, appears to be a rising star after going 19-3 as a freshman. He recorded 11 pins in 16 tries (six of his matches were forfeits). Interestingly enough, his father Brad was a standout for Lowery from 1987-88 through 1989-90.

“He’s a good wrestler,” Kopetzky said. “He was one win from making it to the state tournament. He works hard.”

After edging out West Forsyth and claiming the conference championship in the spring of 2021, Davie finished second to West last year, finishing 23-10 overall and 6-1 in the league. To dethrone the Titans this winter and become a state contender, Davie needs big leaps from guys like Reid Nail, Jerred Alexander and Luke Tehandon – if Tehandon is able to return from injury.

“Reid’s probably going to drop below Lawson, maybe to 126,” McKnight said. “We’re looking for big things from him. He’ll be a big 126.

“Jerred is going to probably start at 170. He’s tall and long. He’s about 6-3. He had a great football season. He was behind Jack last year and couldn’t break the lineup. He’s going to be a huge 170, so we’re looking for big things out of him.”

Kopetzky said of Alexander. “He works really hard and he’s gotten a lot better on his feet.”

Tehandon went 10-7 as a sophomore at 113, but his season is in jeopardy after undergoing shoulder surgery.

Davie could have freshmen at 113 and 220. Braxton Hunter, the likely starter at 113, was virtually an automatic pin last year for North Davie. His father (Michael) and brother (Bryson) both wrestled for Lowery.

“He’s going to get beat up a little bit at first, but he’ll grow and learn,” McKnight said. “He’ll take his licks, but he’s going to be OK.”

Jerred’s brother, freshman Jakob Alexander, is a possible starter at 220.

“He’s young and he’s going to struggle just like Godbey did (as a freshman) and like everybody does,” McKnight said. “But he learns from his brother and he’s almost as tall as Jerred is and that will help.”

Notes: This is Long’s fourth year as head coach. His career record is 66-31, including a 14-3 mark in the Central Piedmont Conference. … Unless something changes, Davie will forfeit at 106. “We thought we had a couple of guys coming out, but we haven’t had anybody yet,” McKnight said. … Charlie Frye’s senior season has been ruined by a shoulder injury. He was a lock to start on the offensive line this fall, but he wasn’t able to play a single down in football. He was a three-year starter in wrestling – he won 14 of 20 matches last year at 195/220 – but he had to say goodbye to wrestling as well.