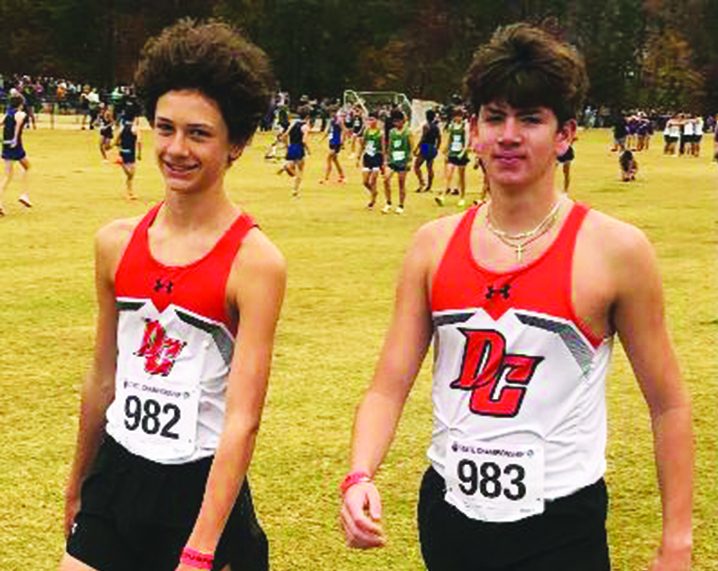 The Davie cross country team wrapped up a successful season Nov. 5 at the state championship meet at Kernersville’s Ivey Redmon Park. Two Davie runners competed in the 4-A race by virtue of their performances at the Midwest Regional.

In a field of 179 finishers, senior Owen Sulecki and sophomore Thomas Essic went toe to toe with the best the Tar Heel state had to offer.  When the dust cleared, Sulecki had claimed 85th place with a time of 17:12. Essic crossed the line in 113th with a time of 17:29.

In the team race, Green Hope took home the championship with 124 points to outdistance Charlotte Catholic (166), Mt. Tabor (178), Weddington (178) and Marvin Ridge (197). Pinecrest’s Zach Gilbertson surged ahead of Weddington’s Caden Townsend over the final 100 meters to win the individual title in 15:28.

“It was a bit of an adventure for our guys today,” said coach Rob Raisbeck. “First of all, due to our placing at regionals, Owen and Thomas had to start in the second row. That put them at a tremendous disadvantage coming off the line and they got buried. At the half mile mark, they were among the last 15 runners in the race. To their credit, they worked hard to move up through the pack but their first mile was 15 seconds slower than what they normally run because they couldn’t maneuver past all of the runners.

“Then at the 1.2 mile mark, a course marshall directed the runners the wrong way on the course. As a result, they had to add an extra 200 meters on the fly at the end. It was crazy. I saw what happened as soon as the runners went off course and was near one of the race officials who immediately made the call to change the course at the end. I called Jeff (Jones) who was at another point on the course and he was able to tell our guys to be prepared to run the extra 200 meters. It was fortuitous that I was where I was next to that official because there was no way to broadcast to everybody what was going to happen at the end.”

“We are still kind of recovering from COVID in terms of our numbers. Every coach I have talked to says the same thing. A bunch of our runners in the junior and senior classes quit running during the early part of the pandemic and did not return. We did have a strong turnout in our freshman class this year, so hopefully the trend is reversing. We had 30 runners on the team this year with only one senior and five juniors, three of whom had never run before. Over half of our team had never run a cross country 5k before this fall.

“Jeff and I are optimistic about the team’s future. At regionals, we had two sophomores and three freshmen in our top six boys. Our average time of 17:20 for our five scorers is considerably better than I thought we could run before the season due to our youth. This group has the talent and potential to do some really good things. We also ran five freshmen girls at regionals, so we need to develop them for the future.

“Going forward we have several runners who have decided to compete at the Nike Southeast Regional at Wake Med Park in Cary on Nov. 27. There will be runners in several divisions representing about 10 states. It is a pretty cool event and each runner gets some Nike gear. Aside from that event, we are transitioning to indoor track now after a short rest. We do have a few runners who will be doing other sports in the winter, but we should have everybody back for outdoor track in the spring and that should set us up for a good cross country season next fall.”