Grimsley too fast and too strong for War Eagles 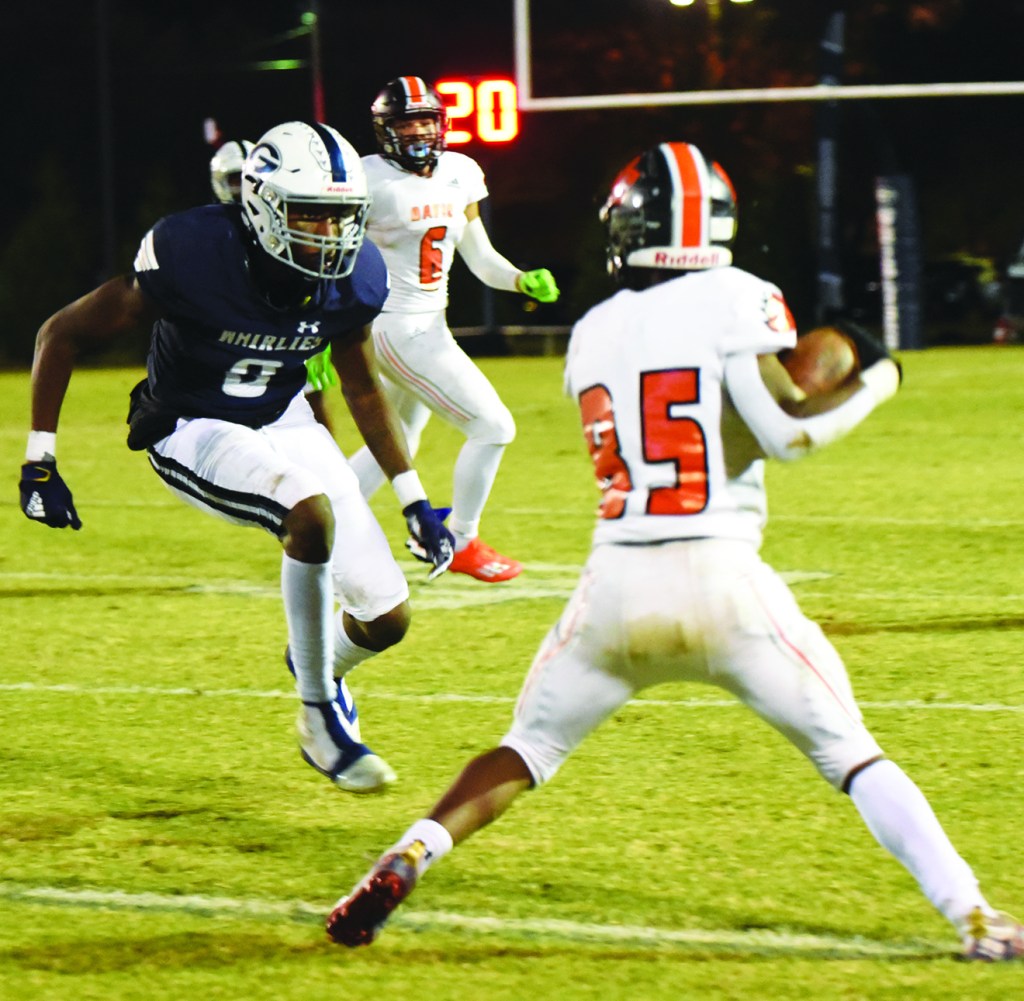 A lopsided loss in the first round of the 4-A playoffs at Grimsley was not unexpected. The unbeaten Whirlies, who are 44-3 since 2019, are one of the state’s Goliaths, they have dynamic playmakers everywhere on both sides of the ball and they are capable of winning their second state championship in three years.

Grimsley showed off its well-rounded talents by racing past visiting Davie 69-37 Friday in Greensboro.

But there was a consolation for Davie: The War Eagles played out of their minds on offense. They scored more points than Grimsley had allowed all season. Five of their 12 possessions resulted in touchdowns. They didn’t suffer a three-and-out until their 10th offensive series in the fourth quarter. They mounted 28 first downs and 507 yards. And it wasn’t like the War Eagles scored on some short fields or big plays or busted coverages. Their TD drives were 77 yards in six plays, 49 yards in six plays, 69 yards in nine plays, 71 yards in four plays and 85 yards in 17 plays. And on the drive that ended with a Palmer Williams field goal, they advanced the ball 33 yards in eight plays.

“I’m extremely proud,” coach Tim Devericks said. “Half the battle when you go into these games is your kids believing that they have a chance. Obviously, we didn’t want to give up that many (points), but we competed for all four quarters.”

Playing fearlessly as a 24-point underdog, Davie went back and forth with Grimsley in the first half.

Grimsley’s second play from scrimmage was a 48-yard bomb from senior quarterback Ryan Stephens to Terrell Anderson. Davie cornerback Willie Purvis was on Anderson’s hip, stride for stride, but Anderson just outjumped the 5-10 Purvis at the Davie 17. Anderson and Alex Taylor are both 6-2 junior receivers who had significant size advantages on Davie’s DBs.

“Willie couldn’t have done more,” Devericks said. “He was right there in good coverage. It reminded me of a play at East Forsyth when Gavin (Reese) had good coverage and their guy just went up and made a play.”

Davie’s offensive response was impressive. QB Ty Miller hit Markel Summers and Braddock Coleman for first-down completions and then Miller faked a handoff to Summers, used blocks from receiver Evan York and right tackle Evan Froelich to get around right end. Then Miller kicked into high gear and sprinted through the secondary for his longest run of the season, 44 yards, to tie the game at 7-7.

Grimsley drove 80 yards to take a 14-7 lead, but Davie’s defense forced a punt late in the first quarter and the offense took advantage. On third-and-5, Miller hit Coleman for nine yards. The drive stalled, but Williams came through with a 33-yard field goal.

Miller gained 9 yards on a keeper, he hooked up with Brodie Smith for 27 yards and Grimsley committed pass interference against Aidan Froelich to move Davie to the Grimsley 6. Summers finished the drive from the 1 and Davie had a shocking 17-14 lead with 6:49 remaining in the first half.

“There for a little bit, they were wondering what was happening,” Devericks said.

“We had the execution we needed and we put up some points,” Summers said. “(Miller’s 44-yard run) gave us a boost and the confidence we needed.”

Davie fought its hardest to keep pace, but there was no stopping Stephens, sophomore running back Mitchell Summers (19 carries for 253 yards) and Grimsley’s juggernaut offense. It moved 75 yards in five plays to regain the lead at 21-17.

Six plays later, Taylor made a one-handed, circus interception at the Grimsley 25. (Taylor and Anderson play both ways.) The Whirlies marched 75 yards and scored with :39 on the clock to produce a 28-17 margin at the break.

Davie had few complaints at halftime. Both teams had 12 first downs, Grimsley had 309 yards to Davie’s 233 and Davie was within striking distance.

Unfortunately for Davie, you could sense where this one was headed on the first play of the second half. Summers burst through the middle for an 80-yard TD. Davie’s d-line and inside linebackers did a fine job containing Summers in the first half (48 yards on nine carries). They could do the bend-but-don’t-break thing as long he was limited to five yards per carry, but Summers went crazy in the second half and Davie faded fast.

“When you get their athletes in space, one missed tackle …” Devericks said. “They were playing with their big tight end and backside guard and running a lot of GH Counter and trying to outnumber us. We just misfit it one time to open the second half, and that’s all that guy needs.”

The good part: The offense kept coming up with surgical drives. After being aided by two 15-yard penalties on Grimsley, Miller placed a perfect throw over Taylor and into the arms of Smith for a 22-yard TD that shaved the deficit to 35-24 with 8:43 left in the third.

“It was a great way to go out,” Miller said. “We played like we’ve been wanting to play all season.”

Yes, the Whirlies kept scoring. Davie’s defense struggled mightily to set the edge, it was gasping for air all second half and it wound up allowing its most points ever. But the Davie offense held up its end throughout.

Miller went 27 of 46 for 265 passing yards along with 114 rushing yards. It was his sixth 200-yard game, his fourth game with 20-plus completions and he marked the 12th time a Davie QB has completed at least 26. Summers ran for 110 yards. Smith had 11 catches for 143 yards. His last two games were a receiver’s dream: 22 catches, 256 yards, four TDs. It was just the 12th time a Davie receiver has hauled in 11-plus catches, and it was his fifth 100-yard effort. Miller also connected with Summers (six receptions), York (five), Coleman (three) and a sophomore call-up from the JV, Leon Bradshaw (two).

“With the work (Smith’s) put in to get those routes crisp like they are, that’s what the outcome is,” Miller said.

“(Miller) did a good job of reading what the defense was doing and keeping them offbalance,” Devericks said. “He had a really good feel for what they were doing up front. (Miller and Smith) have a great connection. We’re really going to miss Brodie and his route-running ability and his leadership.”

Summers showed plenty of grit all season, and this one was no different. After only managing 12 yards on his first seven touches, he found some creases and gained 98 on his last 10 attempts. That resulted in him surpassing 1,000 rushing yards.

“(Matt) Gould gave me an opportunity to reach 1,000 yards,” said Summers, who carried the ball on Davie’s final six plays, grinding away for 70 yards. “That was my goal for this game.”

It was also inspirational the way the offensive line performed. Miller attempted 46 passes and was sacked once. There were just two negative plays all night. Grimsley has a d-lineman who is a five-star recruit by Georgia, but the 6-6, 355-pound Jamaal Jarrett was pretty much a non-factor.

“It was amazing,” Miller said of sophomore left tackle Jackson Powers, junior left guard Evan Copeland, sophomore center Ryder Strickland, sophomore right guard Landon Barber and junior right tackle E. Froelich. “Everybody was talking all week about how (Jerrett) was going to be a problem, but he didn’t get his hands on me that much. They’ve been getting better every game, and tonight showed it.”

“Playing good people in the CPC with talent and size like that has prepared them to not back down against anyone,” Devericks said.

Jarrett lined up at different places. The two guards (Copeland and Barber) and center Strickland deserve most of the credit for keeping him contained. Even though Strickland (5-9, 260) was giving up eight inches and nearly 100 pounds, he was unfazed.

“It was really cool going against someone at that level, so I was happy about it and I feel like I got to prove myself a little bit,” Strickland said. “Our run blocks, we got confused with the fronts at times. But our pass blocking was sound throughout the game.”

Williams, Miller, Smith and Summers fulfilled their promise and put their names in the Davie record book.

Williams, who came in with a 42.6 punting-yard average, needed a good night to break the 43.2 record that David Wooldridge has owned for two decades. Williams kicked a 45-yarder in the first half, bumping his average to 42.7. In the fourth quarter, he killed a 61-yarder to lift his average to 43.3, barely ahead of Wooldridge for a new record. Williams also drilled five field goals and sent 33 of 54 kickoffs into the end zone.

The unflappable Miller finished fifth in TD passes (24), sixth in completions (183) and ninth in passing yards (2,200). Despite playing varsity for just one season, he’s already tied for seventh in career TD passes.

And Summers is tied for ninth in TDs with 18.

With Miller, Summers, York, Coleman, Bradshaw and the entire o-line back, the War Eagles will enter 2023 with good vibes. There is no substitute for experience, and they will have plenty of both sides of the ball.

“We have an opportunity in front of us,” Devericks said.

Notes: After playing a reserve role for weeks, Coleman filled in for injured Bryan Argueta and made impressive catches. One time he slipped and was sitting down when he caught it nonchalantly. “Braddock has been competing all year, just waiting for a chance to be out there full-time,” Devericks said of the sophomore. “He’s a competitor.” … Barber gutted it up and played both ways on the DL and OL. “I can’t say enough about Landon,” Devericks said. … This is Davie’s first losing record in four seasons. … Davie sustained an amazing streak: 55 straight games scoring in double figures. … This was the most Davie points in 13 games, despite Grimsley allowing 14 a game on average before Friday. … With 106 points, this was the highest-scoring game in Davie’s 737-game, 68-year history. The previous high was 105 in a 56-59 win over Mt. Tabor in the fall of 2021 and 105 in a 62-43 win over Reynolds in the spring of 2021. … Doug Illing, the winningest coach in program history with 127 victories from 1998-2012, was on hand for the game. He watched from the Davie sideline. … Two of Davie’s nonconference opponents advanced as Mooresville (10-1) won 47-26 over Southwest Guilford and West Rowan (9-2) won 35-7 over Franklin. North Davidson (3-8) lost 45-28 to West Henderson. CPC teams went 2-3 in the first round. East Forsyth (11-0) routed West Forsyth (4-7) by a score of 49-0. Tabor (9-2) won 28-26 over Asheville. Reagan (8-3) lost 48-22 to Charlotte Catholic.