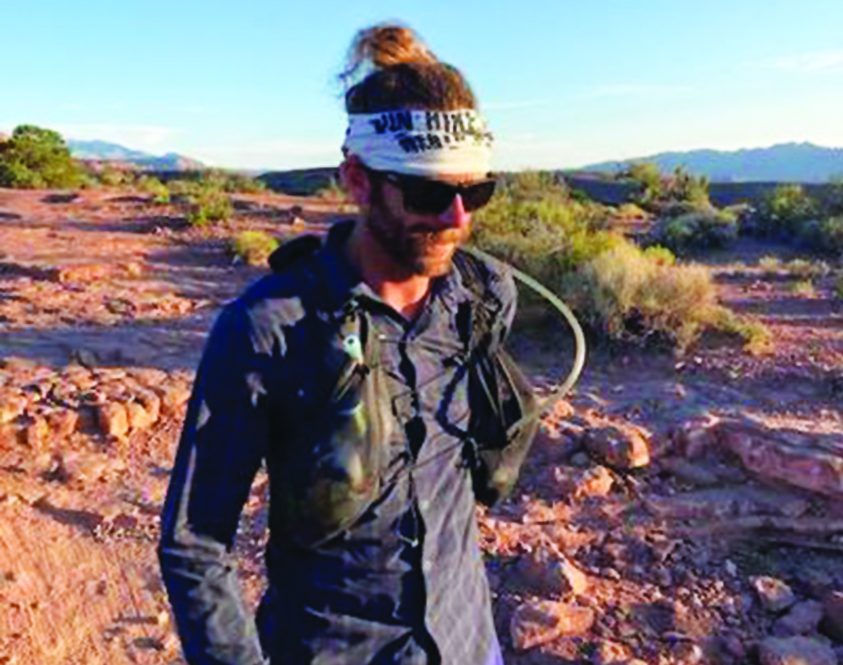 There is a running marvel in Davie County, and his name is Chris Cole, 37. Any runner of any standard can be inspired by Cole, who runs in ultramarathons and recently finished 25th out of 250 in the Moab 240 in Moab, Ut.

An ultramarathon is a run that covers any distance longer than that of a standard marathon (26.2 miles). Ultramarathons are mostly ran on varying terrains. This sport is all about resilience and hard work.

Cole spent his early childhood in King. His family moved to Independence, Va., when he was in fifth grade. After spending eight years there, the Coles moved to Florida. A year later, they moved back to North Carolina.

All the while, sports were a huge part of his life.

“I played baseball, basketball, football, cross country – you name it,” said Cole, who has a warm personality. “Whatever I could get into – hunting, hiking.”

Chris and wife Kristina moved to Davie County in January of 2014. They live on Williams Road near Mocksville.

Cole got into running about five years ago, “with the intent of doing ultramarathons,” he said. “It takes a lot of time and commitment, and it takes years to get the endurance built up, the muscular strength and your bones strengthened to handle that type of fatigue.”

He was introduced to running by Dan Gunnoe.

“We work together at a surveying job,” he said. “We started running after my dad passed away to relieve some stress, hang out, get away from work and find something that we could do together that wasn’t work. And we would always talk about doing ultramarathons.”

Cole started off running 5Ks, 10Ks and half-marathons, but all of those left him unfulfilled.

“Honestly, road running is not my forte,” he said. “Neither one of us knew the ultra running world or community. Dan runs a little bit, but he’s more of a cyclist. It was a lot of barroom talk, talking about (ultramarathons) at dinner, and I didn’t really think anything would come of it.”

His ultramarathon career began with the Leadville Trail 100 in Colorado and The Pilot Mountain To Hanging Rock Ultra 50K.

“I failed my first 100-miler,” he said. “I couldn’t take it, so I quit (at the 65-mile mark). The wheels fell apart. It was in Uwharrie National Forest (in Montgomery, Randolph and Davidson counties). I got til 2 or 3 o’clock in the morning. It had rained all day and all night. We were running through water and mud and I was probably on the verge of getting hypothermia because I got caught out in this rainstorm wearing a tank top. This was before I knew what I was doing. I ended up running into a tree. I said: ‘I’m done here. I want to go home.’”

Knowing he had waved a white flag was tough for Cole to stomach, and he came back with a vengeance in the Monadnock Ultra at Kings Mountain.

“I let that inspire me,” he said. “I let that fuel the fire and I signed up for a 100-miler at Kings Mountain, because I didn’t want to let my training go to waste. I finished that one in second place in 30 hours. It was grueling. It was 20,000 feet of climbing on top of four 25-mile loops. I was just happy to finish. Any race I do, I’m just happy to finish. I just want to cross the finish line. I really enjoy the 50- and 100-milers because you can do it that day and go home at night and sleep good. If you have a good 50-mile day, you’re looking at 10-12 hours to finish, drive home, eat some dinner and crash.”

Since that day at Kings Mountain, Cole hasn’t looked back.

“I’ve got four 100-milers under my belt, a few 50-milers and The Georgia Death Race, which is 74 miles,” he said. “Typically I finish in the top 10 percent, but you never know what’s going to happen. You could have stomach issues or roll an ankle or run out of calories or get sleepy. Anything can happen when you’re on your feet that long – chafing, just all kinds of problems. There’s the physical strain of it and the mental strain, too. There’s also having to adapt and overcome running low on calories or dehydration or maybe overhydration. You have to figure out how to fix those issues so you can keep moving.”

Cole entered his name for the Moab 240, a prestigious event, and he received an email last January confirming his acceptance. He had about 10 months to train, and he trained with manic intensity while juggling his surveyor job, his wife and two daughters (Brianna is a freshman at Davie High, and Ceci is a first grader at Cornatzer Elementary).

“I did the Hellbender 100 in May in Black Mountain,” he said. “That 100 really fired off my hardcore training from May until October. I got up and ran six or 10 miles and then I would go straight to my bicycle. I would cycle for 20 or 30 or 40 miles, and then I would walk my dog in the afternoons and evenings in between work. I’m not going to say that was everyday, but 80 percent of the days were four or five hours of being on my feet. On Fridays, I would run for six, seven, eight hours and then I would hop on my bicycle and ride for an additional two hours. I would take Saturdays off because you have to have a day off, mentally and physically. Saturdays were for family. I would train during the week while Kristina was at work and the kids were at school, and I would work at night to stay caught up with my company.”

The Moab 240 began on Friday, Oct. 7. Demonstrating an insane ability to keep going in the face of major adversity, Cole finished in 87 hours, or 26 hours before the cutoff.

“That’s a whole different beast,” he said. “It’s like what Mike Tyson said: ‘Everybody’s got a plan until you get punched in the face.’ You can plan it out in your head; your plan’s not going to work because you’ve got the sun to deal with, the terrain to deal with, blisters to handle. I made it 70 miles in and I stopped at the first sleep station. I laid down for an hour and 20 minutes and slept for about 45 minutes. I got up and was kind of confused and disoriented. It’s 4 o’clock in the morning, it’s pitch-dark outside, it’s cold and your body’s like: ‘What’s going on? What are we doing? You were just asleep, why are you getting up and moving?’ Surprisingly, it’s fairly easy to get up and get moving again that first night. During the daytime, it’s a lot easier to stay awake because you’ve got the sun and you’ve got people to talk to.”

We’re talking about an ultramarathon through some of Utah’s most challenging terrain.

“The second night was on Shay Mountain and that was 120 miles in,” he said. “I dedicated two hours to rest and food. I changed my shoes and aired my feet out because I had tons of blisters. My buddies were popping blisters while I’m eating. By the time all this was done, I had an hour of rest time left. That was a tough night; I didn’t sleep good. I was kind of hurting. Then your brain kicks in: ‘Hey, you’ve got to get up, you’ve got something to do, you’ve got to finish this.’”

Coming off Shay Mountain was a 16-mile descent. Cole reached the bottom of the mountain at 5 a.m.

“This is the honest to goodness truth: I was sleeping while I was … I’m not going to say running. I was shuffling,” he said. “But I fell asleep. I couldn’t get it together. I was falling fast. I made it to the aid station. They would peel your socks off because they were almost stuck to your feet. You have to carry your mandatory gear, so you have a big ol’ backpack to carry your cold-weather gear, new socks, extra socks, extra batteries – everything you might need to get through the next 12 to 15 hours.”

Cole’s friend, Glen Longhurst, was waiting for him at the aid station.

“Glen was my pacer and we got to see each other every 70 miles,” he said. “I told him: ‘I’m going to crash. I don’t feel good; I need five minutes.’ I laid down in the car for 10 minutes. That gave me five minutes to fall asleep and five minutes to sleep. I got up and the sun was coming up and you wouldn’t believe what that did to me. I snapped out of it. That five-minute nap brought a sense of relief to my whole body. That was Sunday morning and I made it through the day.”

“I started playing my strategy in my head because I knew eventually the lack of sleep was going to catch me,” he said. “You can only avoid that for so long. I made it to Road 46, which was 170 miles in. I got there at 3 o’clock (in the afternoon). I laid down, but it wasn’t working for me. The sunshine, the noise … it just wasn’t in the books to sleep for two hours like I wanted to. I drifted in and out for 45 minutes, I woke up and said: ‘I’m going to make it to the next aid station and I’ll sleep there at about 10 o’clock at night. And that’s what I did. I slept good there (on Sunday night). I slept for an hour solid. I took my shoes off, laid by the fire, put my headphones on and I was out cold.”

When he woke up, it was time to climb Shay Mountain.

“We had to get up to 10,300 feet up into the air,” he said. “With the lack of sleep and lack of oxygen, I went into a delirium. I had out-of-body experiences. Things were falling apart. I thought a mountain lion was chasing me. I didn’t want to sleep on top of that mountain, so I finally got service, called my wife and I made it until the sun came up. So I skipped sleep Monday morning. I started going downhill on the trail and I started taking 10-minute power naps. I took two of those and at the last aid station, I had 18 miles to go. I laid down and slept for an hour because I knew if I didn’t sleep I would not make it to the finish line. That’s how the sleep thing went. You just laid down on the side of the trail and took a dirt nap for 10 or 15 minutes.”

Where did he find the unrelenting determination to reach the finish line?

“I missed my wife and kids so much that I got to the point where I wanted to go home,” he said. “I wanted to go home as fast as I could. I knew if I finished Monday, I could sleep Monday night and Tuesday and go home Wednesday. I told my wife: ‘I’m going to finish this race, and I’m going to finish it well.’ That’s not being cocky, that was the mental preparation I had all summer. There’s no quitting, there’s no turning back, there’s no excuses.”

When Cole crossed the finish line, it was pure elation.

“It was horrible,” he said. “The first two days and nights, I would wake up every hour or two thinking I had to get up and go race. I couldn’t shake it out of my mind. My dreams, of course, were being in the race. Everything hurt. Your muscles hurt, your joints hurt, everything hurts.

“Now, when I got home, all I did was sleep on Thursday, Friday, Saturday and Sunday. I’d sleep for 12 hours at night.”

Indeed, conquering the Moab 240 was an indescribable feeling. Now that his batteries are recharged, he’s got his eyes on the Tahoe 200 in California in June.