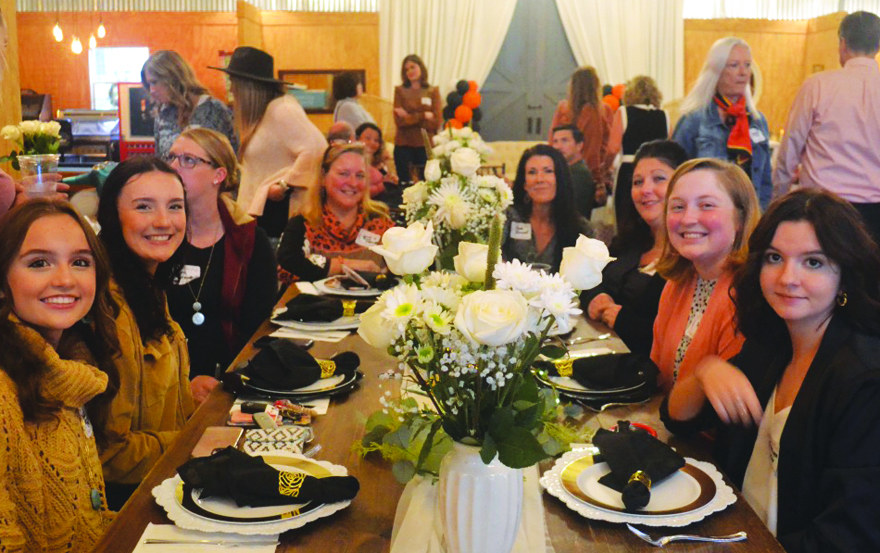 For more than 51 years, the Davie County High School Dancing Boots have graced the football fields and basketball courts entertaining with high kicks, top hats and canes, and props that could have lifted one of them off the ground with a hefty gust of wind.

In all of those years, only four women have held the title of director or coach: Susan Brinegar Wall, Colleen Seager Pitts, Lori Crump and now in her first year, Gianna “GiGi” Goslen.

At the Sept. 29 home football game against Reagan, 50 of them danced with the marching band to the Davie fight song, which also included coach GiGi’s current Boots.

The former Boots, donning their new 51 Years and Still Kickin’ t-shirts, black jazz pants and white gloves, performed a routine created for them by the three 12th-grade Boots.

Plans began in early June while Beverly Brown Burton (dancing boot from 1973-76) was sitting with toes in the sand on the beach at Salter Path.

“I was reminiscing about my days as a teenager and dancing boot,” Burton said. “Those years were amazing under the direction of Susan Wall. She was so encouraging and helped shape my confidence in those years that are so important in a teen girl’s life. So, I decided to call her and ask if she would like me to head up a reunion to celebrate that. And her.”

The Dancing Boots had a 25-year celebration in 1996, coordinated by Sherry Cheek McBride (boot in 1989-90). In 2016, Wall coordinated an event to commemorate the last home football game at the old DHS. Over 40 Dancing Boots returned to dance at the pregame.

“I thought this year was the 50th,” Burton said. “Forgetting that Covid ‘took’ that year, Susan reminded me that this was the 51st year since the first team was created.”

In the fall of 1972, which was Wall’s first year of teaching French at Davie, Martha Hoover, one of the original Davie Dancers (dubbed in 1971 by then-principal Jack Ward) came into Wall’s classroom after school to seek help with a step in their routine. Wall gladly went out back of F-Building to give them some of her vast knowledge from her many years of dance lessons.

Hoover then asked: “Couldn’t you lead us?”

Principal Ward told Wall that the job was hers, as long as she would keep the position until she retired and expect no extra pay.

The Dancing Boots continued the 51st-year celebration on Saturday, Oct. 1 as Wall, Pitts, Crump and Goslen, along with 32 former Boots, reconvened for dinner at The Farmhouse at Gemini Branch in Farmington. Over the last several months, leading up to the event, Burton had asked for memories and scanned photographs from the 190 members on the Dancing Boot Facebook page. She created a slide show with over 65 pictures that included pictures from the first routine Wall directed to “Sweet Georgia Brown” in 1972 to the current Boots on the way to dance camp with coach Goslen this past summer.

“Creating a playlist of band performances with music through the decades made a fun activity for the ladies to have a bit of a competition after dinner,” Burton said. “Memories of sleepovers at Ma Wall’s, trips to France, Disneyworld, England, and even marching in the Salisbury/Spencer parade brought smiles and laughter that left the Dancing Boots sentimental and wanting to reunite to perform again and celebrate more memories.

“We always wanted the event to be inclusive of all Boots. When I learned that Gianna Goslen was the new coach, I had goosebumps. My family lived across the street from her family for eight years, so it was obvious that she and her current Boots needed to have a role in planning the event.”

“We want to do it again and some of the younger Boots who danced under coach Colleen and coach Lori want to perform at halftime,” Burton said. “They’ll have to take charge next time. We challenged the current Boots at the dinner to take the reins in 24 years to celebrate 75 years, but I have a feeling we’ll be together sooner. I hope more will join us next time; maybe we’ll do a kick line.”

Lou Anne Chappell Bennett, a boot in 1972-73, said: “The 1972 Salisbury/Spencer Christmas Parade was freezing cold and a five-mile march. We put plastic bread bags over our feet and legs to insulate them. My feet were numb at the end of the parade.”

Pitts, a boot from 1981-84 and the coach from 2001-16, said:  “My favorite performance was Somewhere Over the Rainbow. We used a huge prop that looked like a rainbow and we prayed that there would be no gust of wind. The best times ever, being a Boot.”

This article was written