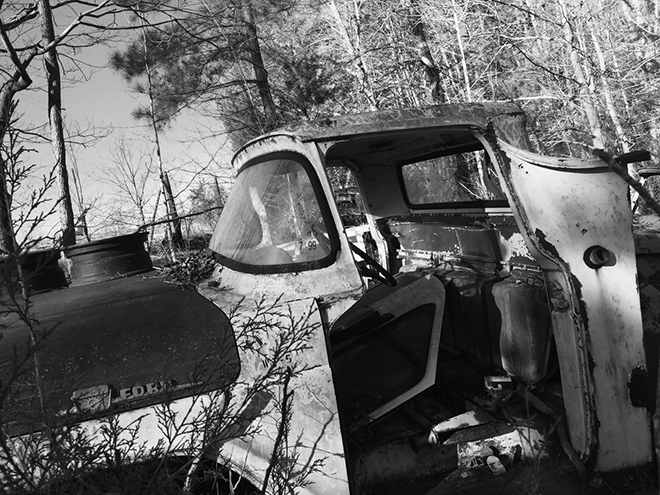 If you’ll recall from my last writing, this story comes from a recording from my late brother, Pete, who asked that I write down his stories so they would not be lost to time. We had such a great time together doing this project; hopefully, I will do it justice.

First, a brief summary of the first “Possessed” story. Joe outbid Pete at auction for a wrecked “92 Ford pickup; he planned to fix it up.  But, Joe’s wife eventually told him that truck had to go!  Did she know something or was she just tired of looking at it in their yard?  Anyway, Pete bought it from Joe with plans to repair it.  That is, until strange noises that could not be explained, kept coming from the truck.  Instead of repairing it, Pete drug it down past the garden into the deep woods near the river and used it for parts.  Unexplained sounds could still be heard such as a door slowly creaking open or being slammed at times.  Even the Duke Power man checking on the power poles leading down to the river wondered what was going on down there.  He had heard some of the same noises and believed the woods must be haunted. He had no intentions of going to check it out when Pete asked him if he would walk down with him.

I went down sometime later and took the suspension off that truck and used it on a friend’s truck.  The left door had already been taken off awhile back and put up in the truck bed so it wouldn’t get damaged ‘cause I had used some of the parts off of it already.  After getting the parts needed for the suspension, I realized that the door wasn’t in the back of the truck.

And, later on Jeremy come up here one day.  I said, “Jeremy, you didn’t get that door out of that ’92 Ford truck down there, did you?” He said, “No. I haven’t touched it.” So, Jeremy and his two buddies that were with him went down to the river and on the way back up the hill looked around for that truck door. Jeremy came into the shop and said “Well that, that….your door ain’t gone. It’s been moved.” He said, “It’s up there on the hill, uh, further up the hill in that old firetruck.” I said, “And, you didn’t put it up there?”

The first thing that popped into my mind about the word “flash” was all the pictures and videos of the late Princess Diana.  She could not go anywhere or do anything without hordes of photographers following her around and eventually led to her death in 1997.

These photographers who take pictures of rich and famous people are called “paparazzi,” and their goal is to sell their photos to newspapers, magazines, and other media in order to make money. It appears that they deliberately stalk famous people in order to find an opportunity to snap pictures of them as they try to go about trying to live their lives.

I remember watching videos of Princess Diana when she attended events in London, travelled to other countries, and at the end with Dodie Fayed in Paris. Although they went to great lengths to avoid the cameras, the main theory of their death in a horrible car crash is that they were being followed by the paparazzi. The driver apparently kept speeding up until the car went out of control, killing some of the occupants although the princess did live to go to the hospital and died there.

I will never forget all the flashing lights from all those cameras. It is too high a price to pay for wealth and fame.