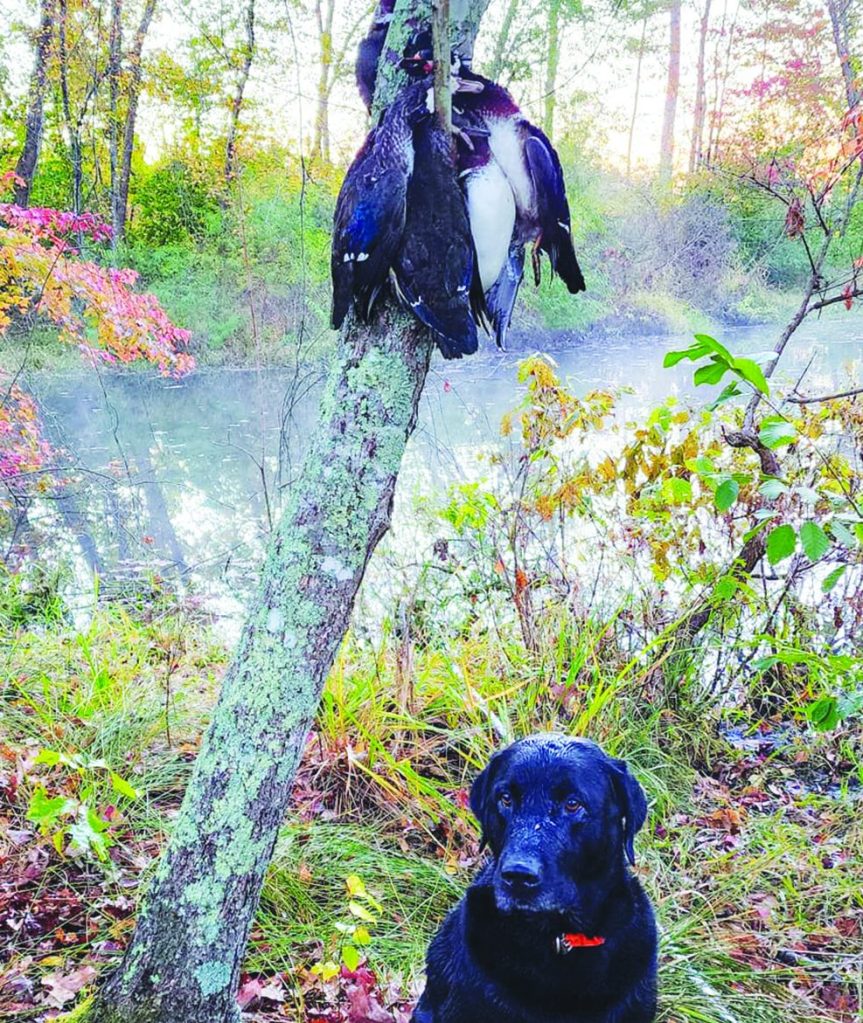 When I was growing up, I used to have trouble sleeping the night before opening day of gun season for white-tailed deer, which in the part of Virginia where I hunted was the third Monday in November.

With dozens and dozens of deer tags used since my first opening day in 1972, the opening of whitetail season has lost a little of its luster, but it’s been replaced. After opening day of spring wild turkey season, the opening day I can’t wait for is North Carolina’s short duck season opener in October.

For the past half-dozen years, my son, Andrew and I have gone to a little sliver of a duck pond just across the river in Yadkin County. It’s a tiny thing – an old irrigation pond for a good buddy’s long-retired farm – not much more than an acre, tucked in the woods, one side lined with white oaks.

In other words, wood duck heaven.

It’s always good for a great shoot or two during the October season, but that has mostly been it. Once the acorns are picked over, the woodies disappear, leaving us with largely empty game pouches when the second season arrives around Thanksgiving. We would normally hunt the Wednesday of the 4-day October season, opening day, and again on Saturday. In 2021, the N.C. Wildlife Resources Commission moved the season from the first of the month to mid-month and shunk it to 2 days, making the second day, this past Saturday, our day to try and interrupt the incoming flight patterns of some of the world’s most-beautiful ducks.

We were in place – Andrew, Buckshot (the world’s greatest Lab) and me – well before 7 a.m., with legal hunting scheduled for 7:04, 30 minutes before daylight. I was carrying a new shotgun, a Browning A5 that was a present from many of the writers I supervised when I retired as editor of Carolina Sportsman magazine last Nov. 30. In the dark, we could hear acorns splashing down across the pond as their trees released them. I figured that as good an acorn crop as I’ve seen everywhere in Northwest North Carolina this fall, we would be in for a good shoot.

The first two woodies flashed in long before we could see, splashing down about 35 yards away and starting to dive for acorns. They were on the Andrew-Buckshot side of our hidey-hole; both could clearly see them, but all I could make out were some rings on the water when a duck would dive and resurface with breakfast.

At about 7:15 – and I could still barely see, with my 65-year-old eyes no match for Andrew or Buckshot – I caught movement high above the other side of the pond, well above a towering oak tree. Then, I heard wings whistling. It turned out to be three more woodies, who, when they cleared the top of the oak tree, plunged toward the water like they were in an out-of-control elevator – that is to say, straight down.

Shots were fired. I don’t believe mine was on target, but Andrew splashed one bird. Before we could release Buckshot for the retrieve, another handful of woodies arrived, coming from behind us, right over our heads before dropping down in front of us. Two of them didn’t make it.

Andrew pointed our big retriever in the right direction, and one by one, he brought back all three birds – two drakes and a hen. Not a minute later, we heard the plaintive whistling of woodies coming in from the upper end of the lake, where we might actually get to see them for more than a second or two before they were in range. A hen splashed down in front of Andrew, and Buckshot made another great retrieve.

With four in hand and a 6-bird limit just over the horizon, we decided, maybe we’d better hold off and let Buckshot make another circuit of the pond to see if we’d missed a duck falling on the far end of shotgun range, where we couldn’t make out the misshapen lump of a dead bird. He swept along the far edge of the pond and came up with nothing.

We discussed hauling in the two mallard decoys we’d flipped out in front of us, and Andrew was about to grab the long, telescopic pole we use to reach out and touch them, when there was that noise of whistling wings again, this time coming from across the dam to our left. A single drake swung in front of us, left to right, I got the gun to my shoulder, and the Browning spoke, sending him splashing down. Buckshot had him marked and back in our hands in a New York minute.

We pulled in the decoys, rounded up our gear, figured out how to carry out five ducks along with decoys, dove seats and shotguns. At least we didn’t have to fill up our hands with flashlights on the way out. Buckshot led the way back to the truck, secure that he had shown himself more than capable of fulfilling his task in life – bringing home the bacon, er, birds.

North Carolina has had a third deer test positive for chronic wasting disease (CWD), this time a whitetail killed in Surry County during archery season, which opened in mid-September.

The deer was killed in Surry County, across the Yadkin River about 10 miles from the area in Yadkin County where two previous deer tested positive – one killed last December by a hunter and the other taken this past summer by a landowner with a depredation permit.

“Now more than ever, we need the cooperation of sportsmen and women,” said Brad Howard, chief of the Commission’s Division of Wildlife Management. “We need to test as many hunter-harvested deer as possible to figure out the distribution of CWD in our state and how many deer are infected.”

Howard said that the Primary Surveillance Area (all areas within a 10-mile circle around the site of the two previous kills) and Secondary Surveillance Area (all of Surry, Stokes, Yadkin, Davie and Forsyth counties, plus portions of Wilkes, Iredell and Alleghany counties) will remain unchanged since the third deer was killed so close to the two previous kills.