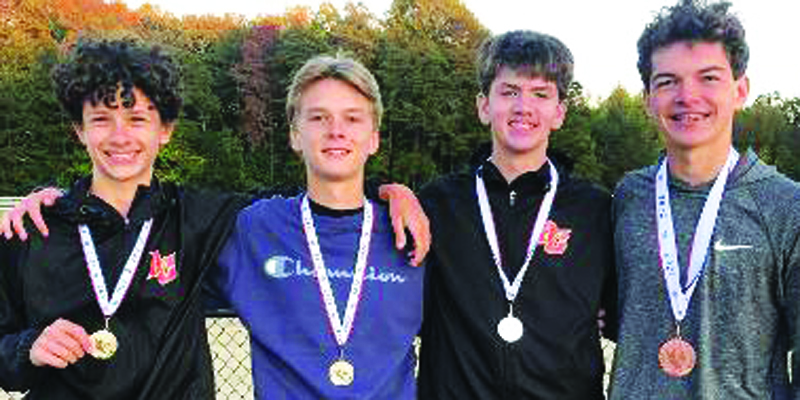 The Davie cross country team traveled to Kernersville’s Ivey Redmon Park on Oct. 19 for the Central Piedmont Conference championships and came home with four all-conference efforts as well as a slew of personal-record times.

With only a single senior on the 30-person roster, the War Eagles went toe to toe with some of the top teams in the state over the challenging 5k course. Remarkably, the first 11 Davie harriers to cross the finish line in the boys’ race all surpassed or equaled their previous personal best times. Five of the top eight Davie girls also established new personal bests.

In the boys’ race, Tabor senior Conner Inman led the way with a winning time of 15:56, which was seven seconds clear of West Forsyth senior Brandt Doty. Davie placed four runners in the top 18, all of whom claimed all-conference honors. Sophomore Tyler Hill was the top Davie finisher in 10th place overall at 16:51, a new PR by eight seconds. Thomas Essic took 12th in 16:59, which was a 17-second PR. Senior captain Owen Sulecki equaled his previous best mark with a 14th place finish (16:59). Ethan Lakey was the top freshman finisher in the meet, and his time of 17:29 was a six-second PR. Rounding out the scoring for the War Eagles was freshman Logan Zuleger, whose time of 18:29 was a 26-second PR and landed him in 32nd.

Junior Will Allard’s 18:43 finish was good for 35th and was a 13-second PR. Freshman Brayden Kistner had a breakout performance with a 41st place clocking of 19:14, which was a 45-second improvement. Fellow freshman Jackson Sulecki knocked another two seconds off of his previous best with a 46th place finish of 19:39. Sophomore Aric Boles was close behind in 48th. His time of 19:41 was a 32-second PR and marked his first time under 20:00. Classmate Chris Devicente was 55th as he notched a 17-second PR of 20:13. Freshman Caswell Moore went under the 21:00 standard for the first time as his time of 20:42 was an 18-second PR and landed him in 62nd.

In the girls’ race, Rerynolds junior Chandler Welsh took top honors in 18:02 to outpace Tabor’s Bronwyn Parks by 24 seconds. The Davie girls were led by freshman Lexie Marion, whose time of 22:16 was good for 31st. Junior Gracie Spicer claimed 38th in 22:59. The next three spots for the War Eagles were claimed by a trio of freshmen, all of whom turned in huge personal best times. Emilia Marks finished 52nd and her time of 24:38 was a personal best effort by 1:43. Riley McNeil was 55th in 24:50, which was a 31-second PR. Clara Phelps claimed 58th place in 25:04. Her time was an incredible 2:11 faster than she had ever run before. Sophomore Raelyn Lankford overcame a recent illness that left her questionable for the race, but she gamely crossed the line in 63rd (25:29).

Freshman Brianna Givens had a 59-second improvement to finish in 28:14. Maggie Smith was the next War Eagle finisher and was followed closely by Emma Boardwine in her first ever race and Reily York.

“Our guys ran lights out this evening,” said coach Rob Raisbeck. “I thought we were locked in to a fifth-place finish but not only did we beat Reynolds for fourth, we almost got Reagan. Jeff (Jones) and I couldn’t be prouder of the guys. Our top 11 all ran PR’s, which is amazing. We did it with two sophomores and two freshmen being among our five scorers. And we had four of our runners named all-conference. To give you an idea about how tough the CPC is, the Metro Conference, which is the eight Guilford County 4-A schools, had their meet immediately before us on the same course. We would have easily won that meet and the second place individual would have been 15th in our race.

“Our girls gave it all they had as well. Four of our five scorers were freshmen and three of them had never run a 5k before two months ago. Lexi and Gracie were disappointed with their races, but they ran hard and are fit. They will get another shot at this course at regionals, and I am certain they will both run fast.”

The War Eagles will compete at the Midwest Regional on Oct. 29 as they return to the Ivey Redmon course. The boys will race at 9:30 a.m., with the girls to follow at 10:15.