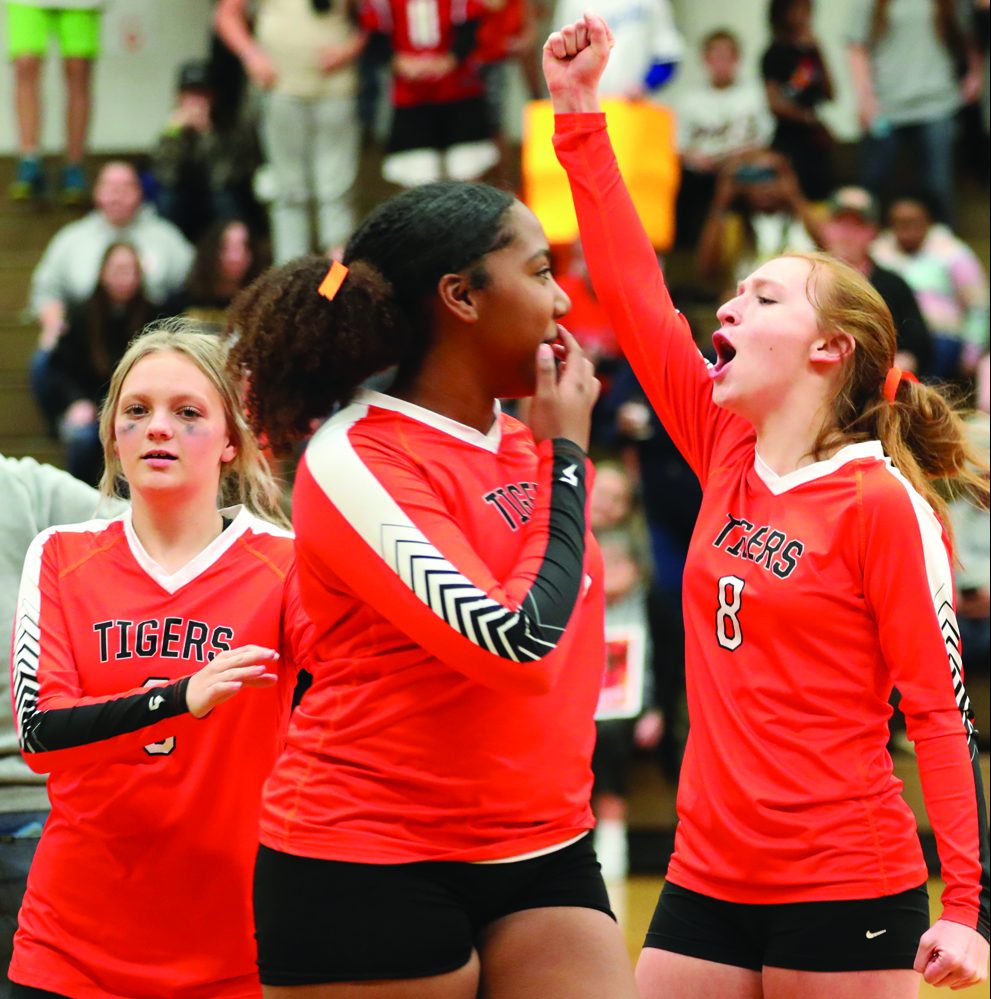 You could not have scripted this better. South Davie’s 15th-year volleyball coach, Gloria Chalmers, has been experiencing extreme sadness. Her husband, Curtis Chalmers, passed away March 22. She found refuge in the gym, her team and parents rallied around her and the 2022 season was everything she could have hoped for.

The Tigers lost at Millennium Charter on Sept. 15, but they were electric the rest of the way, claiming the regular-season title, winning the final 10 matches and repeating as conference tournament champions.

The final point in the championship match against Wesleyan Christian Academy brought a flood of emotion.

“I’ve had a hard year and these girls have helped me heal,” Chalmers said. “They don’t know how much I have needed them. If I was having a hard day, they would always make me laugh and pull me back to the present.”

The top-seeded Tigers, who were at home throughout the tournament, opened with a win over No. 8 North Carolina Leadership Academy on Oct. 18.

Meanwhile, on the same day, No. 4 North Davie hosted No. 5 Ellis. This was the rubber match after the teams split in the regular season. North took the first set 25-21, but Ellis won the next two to advance. Melanie Watson and Quinn Cornatzer were the top servers for Ellis in a 25-20 decision in the second set. The Jaguars won the third set 15-9.

“We took control, everyone contributed and we never looked back,” Ellis coach Beth Hall-Love said.

The loss drew the curtain on Trish King’s 27-year career as North’s coach. She is retiring at the end of the school year. The Wildcats (9-6) ripped off eight straight wins before losing their final two.

“How blessed I have been to work with such an awesome group of young ladies this year,” King said. “I will always remember them as my last volleyball team of my coaching career. I also could not have asked for a better assistant coach than Dawn Basham. And last but not least, what an amazing group of parents. I could not have asked for a better group of people to end my volleyball coaching career.”

Twice South needed a third set to fend off Ellis in the regular season, but the Tigers eliminated the Jags (8-6) in two sets in the semifinals on Oct. 20.

That set up a rematch of the 2021 tournament final: South vs. No. 2 Wesleyan on Oct. 21. They split their regular-season meetings, but the Tigers rode the crowd’s energy to a 2-0 victory that wrapped up a 14-2 season.

“Gracie Goodman and Zahmirah Summers had some big blocks,” assistant coach Haley Plemmons said. “Raney Phelps and Addie Brown were a big success with hits. Impact servers were Raney, Izzy Branham and Addie, and I felt like Izzy kept her head on straight with passing and defense as well as setting.”

“Raney had about 13 serves in a row in the second set to seal the victory,” Chalmers said.

Brown, Phelps, Goodman and Branham were the girls who played on both championship teams. It’s been one heckuva ride – 24 wins against six losses across the 2021-22 seasons.

“Our girls didn’t give up and the crowd – with the help of our biggest fan, Julie Snow – was amazing to help lift our girls up in the first set when we got behind,” Chalmers said. “I am especially pleased to see how well this team was passing and hitting. Their serves have been great and they have really come together as a team. The one thing South Davie prides itself on is good sportsmanship, and my girls exemplified this all season on and off the court.”