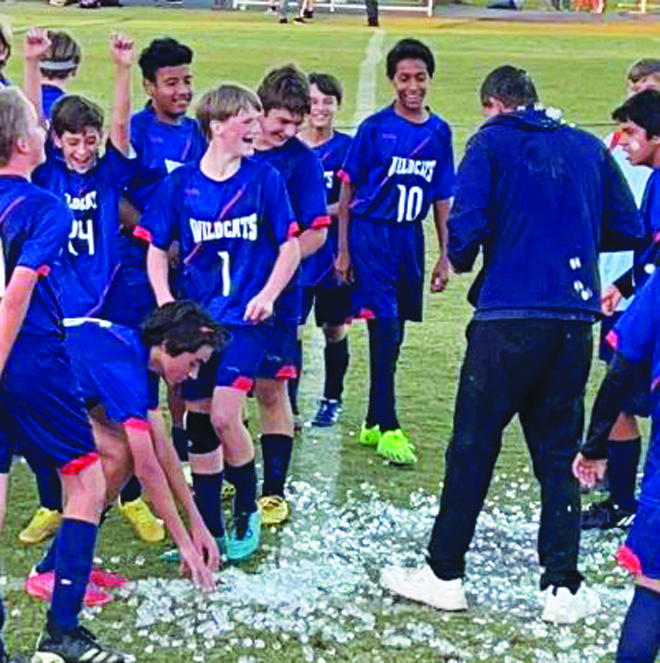 You could feel it building when they scored 27 goals in the first three games, when they held off Wesleyan Christian Academy 5-4  on Sept. 8, when they edged Canterbury 2-1 on Sept. 14.

Three years after going winless, the Wildcats went 15-1 and captured the regular-season and tournament titles. How unbelievable is that?

The top-seeded Wildcats pounded Ellis 6-1 in the first round on Oct. 18. The goals came from Kellan Wiles, Max Rappaport, Hector Rodriguez, Ethan Christie, Dylan Cassetta and Brian Barragan. Hunter Stephens had three assists and Rappaport one.

Santiago Maganda scored for No. 8 Ellis. He had seven of the Jaguars’ 12 goals this season. After falling behind 4-0 in the first half, they played really well in the second half.

“They beat us 8-0 in one half the first game (on Sept. 6), so I was really proud of how we played (in the second half),” coach Susan Jones said after Ellis finished 2-10. “We were aggressive and pressured the ball continuously. Jacob Steelman played an amazing game.”

In the semifinals against No. 4 Wesleyan on Oct. 20, North raced to a 3-0 lead. The Trojans made things tough from there, but North held on 3-2 to raise their record in one-goal games to 5-1.

Rodriguez had two goals. Rappaport had the other.

“We kept our starters in the whole second half,” Gamble said. “We were tired, but we dug deep.”

The championship game on Oct. 21 was a showdown between the top two seeds. North destroyed North Carolina Leadership Academy 9-1 on Sept. 1, but the Falcons pulled a stunning upset in the Oct. 4 rematch, 2-1.

But the on-a-mission Wildcats left no doubt in the final. They threw haymakers in the first half, carved out a 3-0 lead and won 4-1.

Wiles, Cassetta, Christie and Rappaport had one goal each. Stephens, Wiles and Christie had one assist apiece.

“Ethan was in a stopper position, but him and Dylan ended up being up offensively,” Gamble said. “So Ethan and Dylan were involved in that (first-half dominance), too.”

Goalie Brady Carter got a chance to make an impact in the second half, and he didn’t disappoint.

The season for the ages saw the Wildcats win the last six games, outscored 16 opponents 73-20 and get remarkable scoring balance. Rodriguez (17), Christie (14), Rappaport (14), Wiles (10), Manny Perez (seven) and Stephens (seven) were the leaders in goals. Stephens was the runaway assist leader with 19.

“The talent was pretty even across the board,” Gamble said. “You couldn’t pick an MVP because there are so many guys who were equal. They played very well together. I hate to see (the 13) eighth graders go.”

NCLA did not score until the 50-minute mark.

“I said: ‘They’ve already beat us twice; they’re going to be underestimating us. Just go out there and play hard,’” coach Russell Hilton said. “From the time the ball got kicked off, we brought it mentally and physically. NCLA and North Davie are definitely the two best teams, but we didn’t just roll over for them today.”

The game’s only goal came off a rebound.

“If we could have kept it scoreless in regulation, we had a chance because we have the best goalie and we practice PKs,” Hilton said.

“William was on fire,” Hilton said. “He probably had 20-plus saves. He had some awesome saves, too. They had a lot of chances. Ben got hurt (and didn’t play in the second half), and he was playing his best game of the year.”