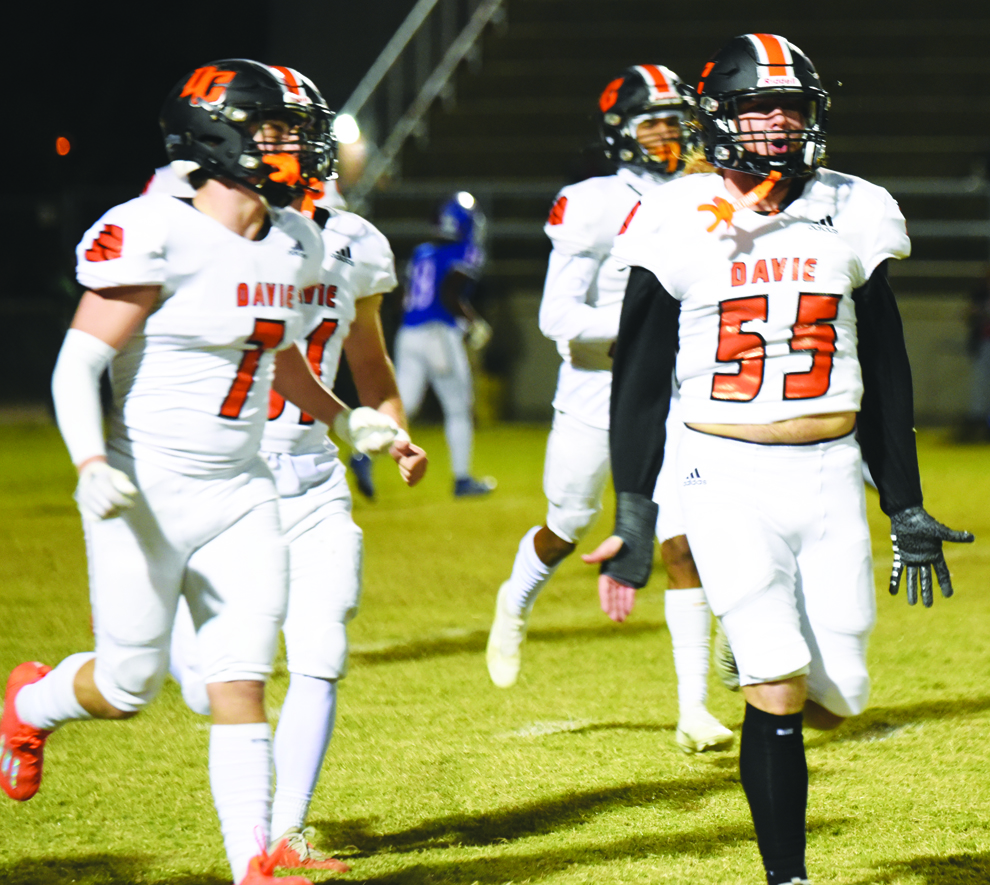 Davie’s varsity football team came out looking crisp Friday at Parkland. Three minutes, 11 seconds into the game, it was 21-0 War Eagles, who were on an insane pace for 300-plus points.

Style points were in short supply from there on, however. The War Eagles did not ground winless Parkland into dust, but they did stop their four-game losing streak, 30-14.

While Davie improved to 3-6 overall and 2-4 in the Central Piedmont Conference, Parkland fell to 0-9, 0-6. The Mustangs’ losing streak grew to 16.

On the game’s second play from scrimmage, Davie running back Markel Summers rumbled 61 yards to the end zone. A penalty on Palmer Williams’ kickoff forced Parkland to start its first possession at its own 5. A three-and-out and short punt teed up Davie at the Parkland 30 and quarterback Ty Miller rolled left and fired a 10-yard touchdown pass to Aidan Froelich. Parkland lost 18 yards on a wayward snap, and Davie recovered the fumble at the Parkland 6 to set up Miller’s 3-yard TD pass to Bryan Argueta.

Davie made a 21-0 lead with 8:49 left in the first quarter look effortless. But the Mustangs, who had been outscored 244-14 in their first five CPC games, did not fold.

They drove 80 yards in nine plays to get on the board. They intercepted Miller and then drove 62 yards in seven plays to pull within 21-14 with 3:35 left in the first quarter. At this point, the teams were on pace for nearly 200 points.

The rest of the game, though, wasn’t pretty if you like offense. In the second quarter, Davie got a turnover on downs at the Parkland 12 and cashed in a 6-yard TD run by Summers, but that was the last TD of the game.

In the third quarter, Davie went 36 yards in three plays and had first-and-goal at the 5 before having to settle for a 29-yard field goal by Williams, who capped the scoring with over 19 minutes remaining in the game.

Davie’s top performer was Summers, who ran 19 times for 221 yards. It was missing No. 1 receiver Brodie Smith (43 catches, 690 yards, eight TDs). That gave Argueta an opportunity to shine, and he did just that with seven catches for 70 yards. Miller hit 13 of 21 passes for 135 yards, including three completions to a freshman, Ethan Driver, who had played JV all year.

Defensively, linebacker Justin Hayes stood out with two interceptions. Cornerback Gavin Reese also had an interception in which he made a nifty catch in the end zone and returned it 29 yards.