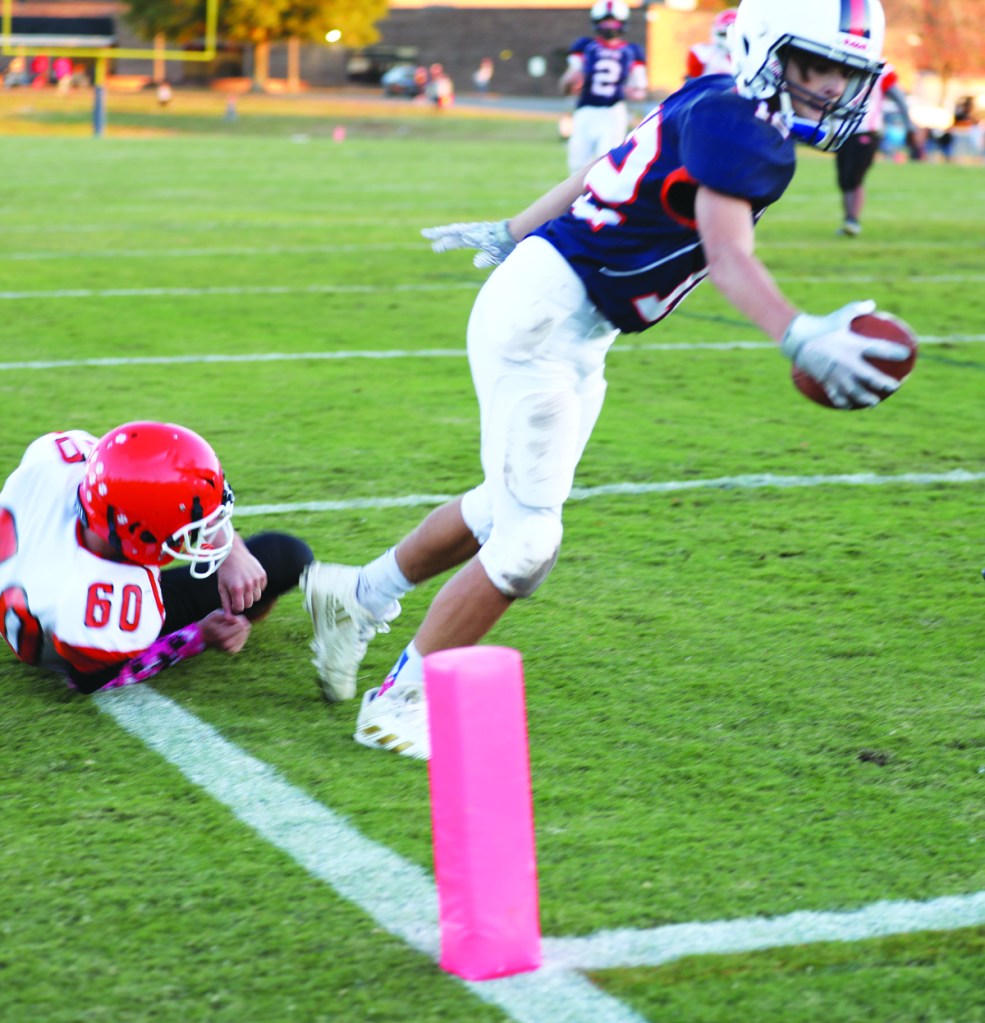 The first North Davie-South Davie football game was unforgettable. North’s Ian Patton scored on a kickoff return with 63 seconds remaining to pull the Wildcats within 20-18, and South prevailed by stopping the two-point conversion. Middle school football doesn’t get much more entertaining than that.

Another nailbiter was brewing when North scored back-to-back touchdowns to cut South’s lead from 22-6 to 22-18, but the Tigers put an early end to the drama in the Oct. 19 rematch at North. They fired off 20 unanswered points to win 42-26.

North lost a fumble on its second play from scrimmage, and South took advantage by taking a 6-0 lead. North tied it 6-6 when Blake French completed a 15-yard pass to Colt Miller. South scored the next two TDs to go ahead 22-6.

North rallied, scoring on a 60-yard pass from John Evans to French and opening the second half with a successful onside kick in which kicker French recovered his own kick after the ball bounced off a Tiger. Moments later, French scored on a 2-yard plunge to make it 22-18.

But North would get no closer. South busted it open even though starting running back Jayce Bentley barely played in the second half.

“We had a battle there for a minute,” North coach Timmy Allen said. “Then everything that could have gone wrong did. But they fought. I was proud of them. They never gave up.”

Bentley was having a big day when he went down.

“Jayce got hurt at the beginning of the second half,” Mayfield said. “He put up two touchdowns before then. He was probably right at 100 yards (when he got hurt).”

Enter Cameron Knox, who picked up where Bentley left off.

“Cameron looked the best he’s looked all year,” Mayfield said. “He was getting one or two carries a game, and he’s had problems fumbling. He came out and looked like he could start on each team. He’s got the ability; he just doesn’t have the confidence yet.”

Quarterback Draeton Nance was perhaps the biggest star for South. He tossed three TD passes, two to Noah Dulin and another to Jayden Warren.

“Draeton might have had over 200 yards passing,” Mayfield said.

“Jayce is a hammer, but their backup (Knox) ran good,” Allen said. “They’ve got three horses back there. They’re legit. I thought we had (Nance) dead to rights several times, and he snuck out of there. He broke tackles. He would pump fake, get guys out of position and then he was throwing some good balls. He looked really good.”

“We were down three offensive starters (because of injuries), and they all start on defense, too,” Allen said. “It’s just one of those years.”

Notes: South evened its record at 3-3. … Ellis seventh grader Emily Hernandez scored on a two-point run against Millennium Charter on Oct. 12, but she wasn’t the first female to score for Davie County in a middle school game. There’s been at least one more. In the early 2000s, Shay Holder scored a TD for South.