Presidential Sites: George W. Bush Texas through and through 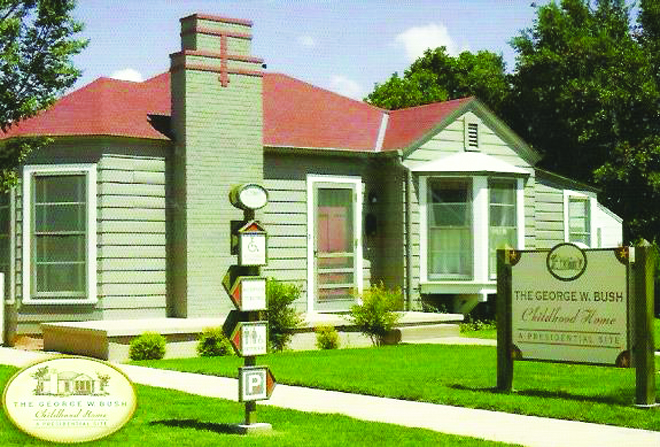 This will be the last in this series of articles concerning presidential sites.  I will not be writing about President Obama, President Trump, or President Biden because I have not visited a site connected to any of those three.

George Walker Bush, the 43rd President of the United States, is considered a Texan, but he actually was not born in Texas. He was born in New Haven, Conne. while his father was still in school at Yale University. After George’s father, George Herbert Walker Bush, graduated from Yale, he put his wife, Barbara, and son, George, into their car and headed to Texas to seek his fortune.

The Bush family lived for a short time in Odessa, Texas, and then moved to Midland, Texas, where they lived for many years.  George H.W. Bush wanted to get involved in the oil business and Midland was the perfect place. It is in hot, dry West Texas near the oil fields. It is so near in fact that you can smell oil in Midland when the wind is blowing in the right direction.

The Bush family lived in the blue house in a row of pastel-colored houses for years. George lived there and attended public school in Midland until he finished seventh grade. The Bush home in Midland had five or six rooms just like all the other pastel houses on that street. Their street was called Easter Egg Row because of all of the colors.The house looks like the houses in Davie County that were built in the early fifties.  There was electricity, but no television. The family listened to the radio and sometimes attended movies, and they just spent a lot of time with the people who lived in their neighborhood. George’s parents were involved in community activities. George played with the other neighborhood children and played on ball teams, etc.  In other words, his boyhood was just like that of millions of boys in America.

The Bush family grew from three to five in Midland.  They had a daughter, Robin, and a son, Jeb, while living there.  All was well with the Bush family until their precious little daughter, Robin, got really sick. She had an incurable disease. Her parents took her to the best doctors in the country to no avail. Robin died. That was a terrible shock for the family and one from which they really never recovered.

The George Bush boyhood home, at 1412 W. Ohio St. in Midland is open to the public.  If you want to visit there you should call 432-685-1112 for hours ite is open. The trip from Mocksville to Midland is 1,403 miles. You get to see a great deal of the United States if you drive. You travel all the way across Texas and see how the landscape changes as you travel west.

Also Midland is interesting if you have never been to an oil producing area. If you stay at a hotel in Midland and you are in the lobby late in the afternoon, you realize you are in oil country because the lobby will fill up with men with dusty boots and work clothes who are returning from the oil fields. The hotel clerk explains that the men stay at the hotel during the week and go home to places all over Texas on the weekend. If you listen carefully, you will hear the roustabouts and other workers talking about the successes and failures of the day.

After completing seventh grade at his school in Midland, George Bush was enrolled in Phillips Academy in Connecticut, graduated from high school there, and then he went to Yale University. After graduating from Yale, he enrolled in Harvard Business School, received a MBA, and then it was back to Texas. For the next few years, Bush spent his time partying and hanging out with friends. He did not seem to have any particular direction he wanted to follow.

During that time he met Laura Welch, whose personality was opposite that of George. She was a quiet, somewhat introverted librarian. George and Laura were married and sometime later George stopped drinking and said that he had become a born-again Christian.

George got interested in politics and decided to run as a representative from his district for the U.S. Congress. He was defeated. He then got involved in the oil business. That worked. He finally sold his share of a business which he was a part of for $850,000. He invested in the Texas Ranger ball team and sold that interest for $15 million.

George, whose interest in politics had continued to build, decided to run for Governor of Texas. His mother told him he would lose, but he ran anyway and defeated a popular Democratic governor, Ann Richards. He was a popular governor and won a second term. During that second term, he decided to seek the office of President of the United States. George W. Bush sought and was chosen by the Republicans as their candidate for president at their convention in 2000. The Bush/Cheney ticket won a much contested election.

During that Bush administration, the country suffered a catastrophic attack on and destruction of the World Trade Center in New York. Mr. Bush’s reaction was a bit slow, but he got his footing. He finally received high marks for how he handled that situation.  The United States went to war against Afghanistan, the home of the evil doers who caused the destruction.  Then Mr. Bush wanted to take out Saddam Hussein, there was a great deal of opposition but Mr. Bush finally prevailed.

Mr. Bush decided to run for a second term. He faced great opposition, but he convinced the electorate that he should stay the course. He won the election and served a second term after which he went home to Texas.

Today, he lives with his wife, Laura, in Dallas, but he still likes to spend time at his ranch in Crawford, Texas, which is 108 miles from Dallas.

He has also busied himself with the George W. Bush Presidential Center which is on the campus of Southern Methodist University., 2943 SMU Blvd., Dallas, Texas, 214-200-4300. Call for information.  That library, like all of the other presidential libraries are extremely interesting to people interested in presidential history.

The 43rd president took to painting after he left office. He has sold some of his art and given the money to charity. He enjoys his twin daughters, born before he became Governor of Texas, his sons-in-laws, and his grandchildren. Needless to say, both he and Laura adore those grandchildren.