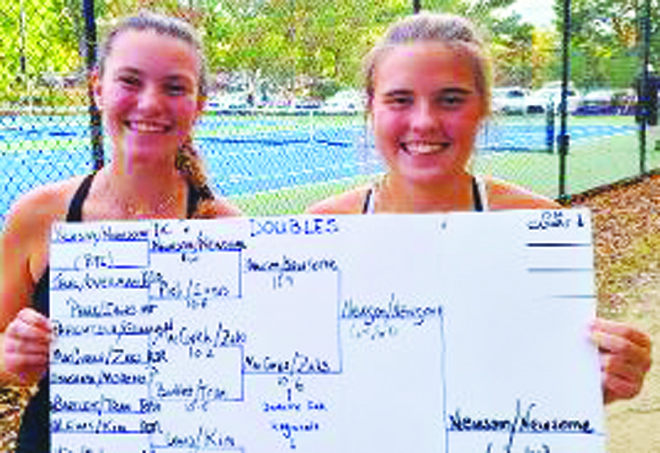 After walking a tightrope in the quarterfinals, the doubles team of senior Leslie Newsom and sophomore Elliot Newsome cruised to the Central Piedmont Conference doubles championship, becoming the first Davie duo to capture the title since Sierra Foster/Amanda Ngo in 2018.

The CPC Tournament was held at Hanes Park in Winston-Salem on Oct. 11.

Newsom and Newsome were in trouble against Mt. Tabor’s No. 1 team, trailing 8-5, but they snatched six of the last seven games to win 11-9. The rest of their day was stress-free. They won 6-1, 6-0 over Reynolds and 6-3, 6-3 over another Reynolds pair in the final.

“When it was 4-7 (against Tabor in the quarterfinals), I went over and said: ‘What is going on right now?’” coach Collin Ferebee said. “They said: ‘Nothing is working.’ I said: ‘OK, here’s our game plan: Let’s take it one game at a time.’ They clawed back to 8-8. Then they went down 8-9. I believed in them, but I was stressed for a little bit. (The Tabor pair) gave Karlie (Quinn) and Tru (Koren) a challenge when we played them at Tabor. I knew they were going to bring it, and they absolutely did.”

After finishing third in the 2021 CPC Tournament, Newsom/Newsome ran their season record to 12-1.

Ferebee was expecting a Davie-vs.-Davie matchup in the doubles final, and it probably would have happened had Quinn not re-aggravated a knee injury in the semifinals. They destroyed players from Reagan in the first two rounds, both ending 10-0. But they lost 6-1, 7-6 to Reynolds in the semifinals. They had a terrific season as Davie’s No. 1 team, going 11-2.

“They were on their way to meeting (Newsom/Newsome) in the finals,” Ferebee said. “Unfortunately, Karlie had a bit of recurrence with her knee. I think if that doesn’t happen, we’ve got a good chance of a Davie-vs.-Davie final. But injuries are an unfortunate part of sports. Karlie definitely gave everything. She is competitive and she wasn’t going to give up. But you can only do so much. Tru definitely stepped up. She hit some big shots and kept them in it. They got to a tiebreaker (where they lost 9-7). All things considered, that was a great result.”

The top four finishers in singles and doubles earned regional berths. While nobody from Davie qualified in singles, senior Sarah West Marklin, freshman Bailey Aderhold and junior Gabby Thompson did not lack fight.

Marklin went off against Reagan’s No. 2, junior Elizabeth Tomblyn, and won 10-2. She lost 10-5 to Reagan’s No. 1, sophomore Lydia Berger.

“I look over and Sarah is already up 5-0 (over Tomblyn),” Ferebee said. “I look back over and she’s up 9-2. She took care of business quick. Sarah put up a heck of a fight today, and I couldn’t be more proud of how hard she played.”

Aderhold lost 10-1 in the first round to Berger, but it was an inspiring loss.

“Bailey played exceptionally well, but it’s hard for a No. 6 to beat a No. 1,” Ferebee said. “There was a guy walking through Hanes Park and he talked to one of my players when Bailey was playing (Berger). He said: ‘What seed does (Aderhold) play (for Davie)?’ She goes: ‘Six.’ He said: ‘That’s your No. 6?’ That tells you how well she was playing. She had multiple games that went to multiple deuces. So it sounds like Bailey got crushed, but really if a point or two goes this way or that way, we’re looking at something like 10-5.”

Thompson made quick work of her Glenn opponent in the first round, 10-0. In the quarterfinals, she ran into West Forsyth junior Sam McEachran, who went on to capture the singles title for the third time. Thompson lost 10-0, but she did everything she could.

“Gabby was booming some serves and ripping some forehands,” Ferebee said. “I think if you put her against any other draw today, she’s going to hold her own. I was really impressed with her and looking forward to continuing all of that next year.”

Notes: Davie repeated as conference champion for just the third time in program history. The War Eagles won three straight crowns from 1975-77 and three straight from 2016-18. … Marklin went 10-5 in singles. Aderhold went 12-2 and Thompson 3-1. … In the singles final, McEachran blew past Berger 6-0, 6-1.