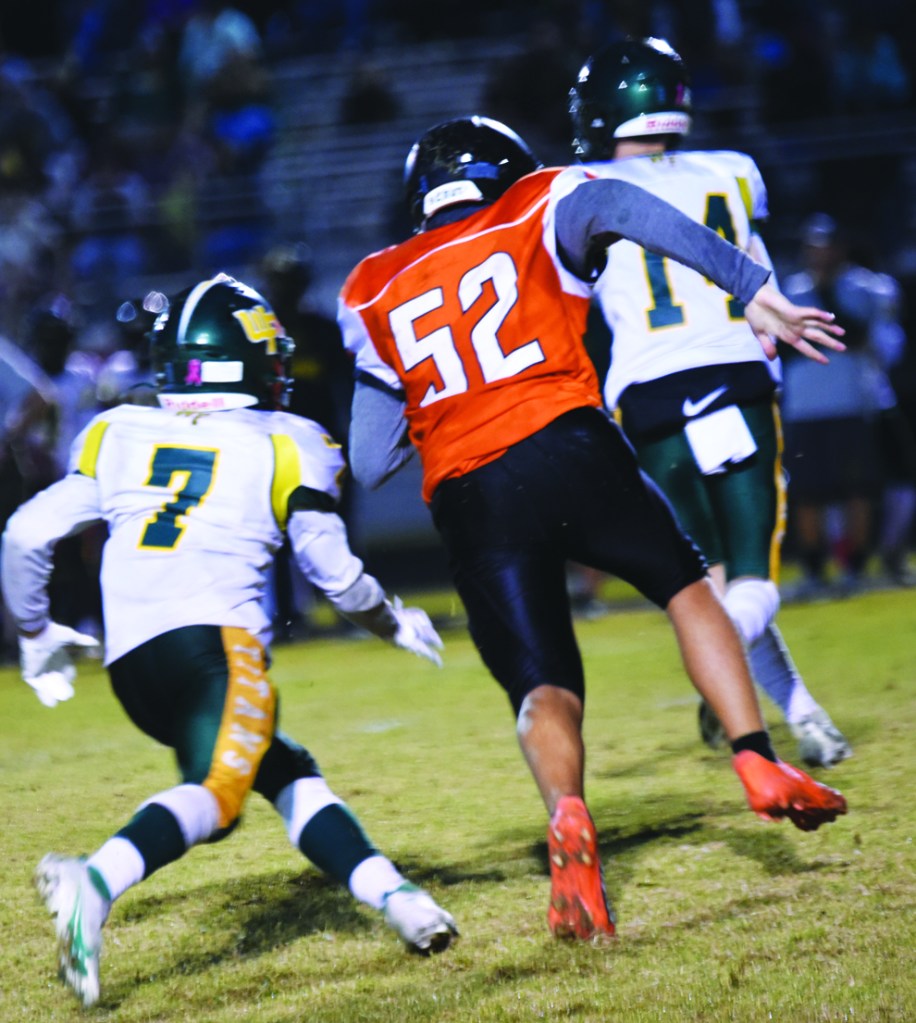 Davie’s JV football team pulled out a tremendous game against visiting West Forsyth on Oct. 13. The 35-28 victory was not something that could have been predicted after a 41-14 loss to Mooresville on Aug. 18 and after a 56-13 shellacking by Reagan on Sept. 27.

“I don’t look at social media, but the kids said (West Forsyth players) were putting stuff on there about they own Davie and all that,” coach Perry Long said. “So they were pumped. We are getting better. From the first game to now, we’re a much better team.”

Davie did not have an answer for West quarterback/receiver Darrell Page, who rushed for 121 yards on 15 carries and then dominated at receiver in the waning moments. But they managed to outlast West because of big offensive games from Archer Richardson, Jamarius Pelote and Leon Bradshaw.

After Davie turned it over on downs at the West 37, the Titans marched from their 37 to the Davie 20, where it was second-and-2. West was threatening to go ahead by two scores, but it fumbled and Davie’s Christian Boswell recovered.

Davie cashed in the turnover. Pelote hit Richardson in the flat for 15 yards. Three plays later, David Patton made a splash play, getting behind the secondary and hauling in a 58-yard touchdown catch. Pelote’s two-point pass to Isaac Swisher tied it at 8-8.

Davie would score 21 unanswered. Swisher had a 23-yard reception. After West was penalized for 15 yards on a horse-collar tackle of Pelote, Bradshaw gained 21 yards on a reception to move the ball to the West 5. Pelote finished the scoring drive with his legs.

West returned the ensuing kickoff all the way to the Davie 25, but little time remained in the first half and West missed a 29-yard field goal attempt.

In the third quarter, Davie took advantage of another fumble. West coughed it up at its 39, and Richardson bulldozed through the middle for a 39-yard TD. Patton’s kick made it 21-8.

West came roaring back. It covered 59 yards in seven plays to pull within 21-15.

Davie came up empty on back-to-back possessions, and Page went back to work, running 23 yards to the Davie 21. On fourth-and-7, West scored on a 18-yard pass play and took a 22-21 lead.

“It was a crazy back-and-forth game,” Long said.

Davie moved from its 33 to the West 23. That’s when Bradshaw, who dazzles seemingly every week, appeared to make an unbelievable catch in the end zone despite pass interference. Officials did call the interference, but they ruled no catch. Instead of six points, Davie had first down at the West 11.

“He caught the ball,” Long said. “It was underthrown, he jumped over the guy and caught it on the other kid’s back. He snatched it and went to the ground. The back judge said it was incomplete. (But) he never dropped the ball.”

That call loomed large when Pelote was intercepted two plays later at the West 5. But the defense came through with a stop and West punted from deep in its territory.

On fourth-and-1 from the West 31, Pelote wrong-footed the defense with 5-yard completion to Bradshaw. A 15-yard holding penalty moved Davie back, but Pelote and Bradshaw connected on a post route for a 37-yard TD. Davie had a 29-22 lead with five minutes remaining.

Next was a game-changing play: Patton squibbed the kickoff, a Titan mishandled it and Davie jumped on the ball at the West 39.

“We wanted (Patton) to pooch it, but it was more of a squib kick and we somehow got on it,” Long said. “It didn’t go as planned, but we got the ball.”

The Titans responded with an 80-yard scoring drive, but they needed 11 plays and used considerable clock. Page moved to receiver for this series, and he made four catches for 58 yards. It was 35-28 with 1:20 remaining.

Victory was assured when Davie recovered the onside kick.

Richardson had only rushed for 50-plus yards once this season, but his confidence is at another level after carrying 23 times for 144 yards against the Titans.

“I made him a captain for the game, and he was pumped up,” Long said.

Pelote did his part, hitting 14 of 23 passes for 220 yards. Bradshaw had six catches for 94 yards. Richardson had five catches for 38. Dallas Sims had one catch. They were protected by offensive linemen Ryan Williams, Caleb Coble, Maddox Creason, Jakob Alexander and John Holcomb.

“If (Pelote) stands in the pocket, he can complete passes,” Long said. “Sometimes he wants to bail a little bit, but he’s gotten a lot better.”