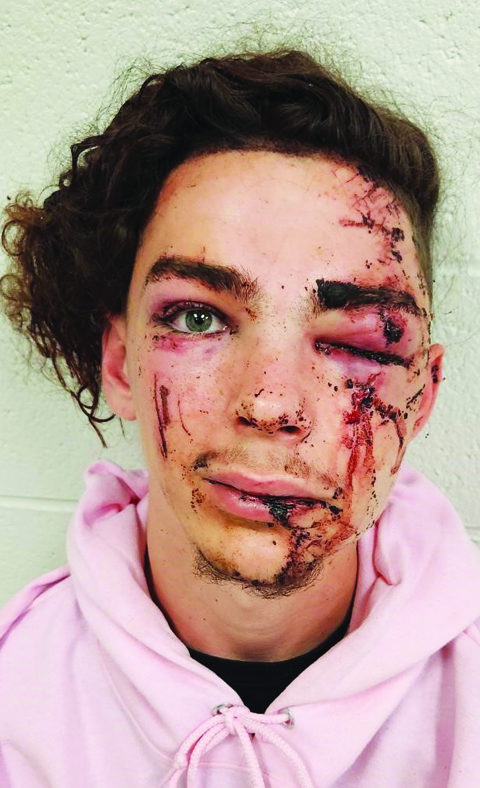 Kaye after treatment at the hospital for injuries suffered in the wreck.

A Winston-Salem teen was taken into custody after  leading police on a chase from Downtown Mocksville to where he crashed the vehicle he was driving on US 158 near Farmington Road.

John Harper Kaye, 19, was charged with felony fleeing to elude arrest with a motor vehicle, failure to heed for blue lights and siren, careless and reckless driving, and four counts of improperly passing by the Davie County Sheriff’s Office. He was taken into custody in lieu of a 410,000 bond.

It happened in the middle of the afternoon, with the suspect putting multiple people in danger with reckless driving, reported Sheriff J.D. Hartman.

A deputy was parked on Wilkesboro Street, part of a renewed effort to curb traffic violations there, a news release from the sheriff said.

That deputy watched as a white Dodge Charger, with a 30-day temporary license plate, spun its tires and did a “donut” at Wilkesboro and Gaither streets. When the deputy pursued, the suspect drove the vehicle behind a local business.

“The deputy located the vehicle. The suspect vehicle then pulled out onto Gaither Street and traveled toward Main Street … did a 180-degree turn in the middle of Main Street.”

The suspect briefly lost control of the vehicle in front of Eaton Funeral Home, causing it to spin sideways before heading east on North Main at a high rate of speed, passing vehicles on a double yellow line, Hartman reported.

The deputy lost sight of the vehicle and stopped the pursuit. Other deputies were stationed further down US 158, at MawMaw’s Kitchen, when they saw the vehicle come by at a high rate of speed, the sheriff’s office reported. The driver lost control and the vehicle overturned onto its top on the side of the road.

Kaye was transported to Atrium Health Wake Forest Baptist Medical Center, where he was treated and released.

Chief Deputy Brian Jacobs said the suspect had recently purchased the vehicle from a Tobaccoville man, but the title had not yet been transferred. 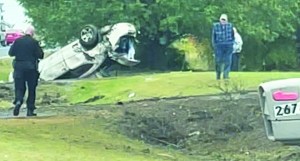 Kaye lost control of the vehicle and wrecked on US 158 near Farmington Road.