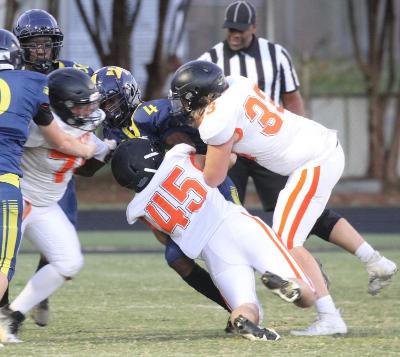 When Davie’s JV football team lost a fumble at the Mt. Tabor 2 in the fourth quarter, its season was on the verge of crumbling. The War Eagles had lost two in a row and things looked daunting as Tabor held an 18-14 lead after recovering the fumble.

But in a wild finish, receiver Ethan Driver  and linebacker Josiah Johnson saved the day as Davie escaped 20-18 at Tabor on Oct. 6.

“That was a must-win game for us,” coach Perry Long said.

“It was a big win to get a little momentum,” offensive coordinator Matt Gould said. “We were fighting with East Forsyth and a few plays here or there, we win that one. (The Reagan) game was a downer, so it was good to get back on the upswing.”

The War Eagles faced a 12-0 deficit before the dynamic Leon Bradshaw gave them new life with a 55-yard punt return for a touchdown.

“They had two gunners coming at him, and he went right between the two gunners,” coach Tim Devericks said. “Leon went down the left side, he made one cut back toward the middle of the field and that was it. They punted to him again, but they made sure it had a lot of hang time. So he pretty much had to fair catch punts the rest of the night.”

After playing in Bradshaw’s shadow for most of the season, Driver emerged as the star of the game. The freshman hauled in a 32-yard touchdown pass from Jamarius Pelote to tie the game at 12. On the two-point play, Pelote hit Bradshaw with a 7-yard slant as Davie grabbed a 14-12 halftime lead.

“Ethan’s one of our best receivers,” Gould said. “We tried to get him involved and he’s had some big plays. We’d like to get him the ball more, but the defense and other stuff have prevented us from getting it to him more this year. He had two huge catches.”

The Spartans regained the lead at 18-14, and they caught a huge break when Davie fumbled on the doorstep of the end zone.

“We drove it all the way down to the 2 and fumbled,” Gould said.

But the defense and special teams kept Davie’s hopes alive. After the defense got a three-and-out, Davie partially blocked the punt – the second block of the night – to give the visitors possession at the Tabor 20 with four minutes remaining.

“In the second half, it got crazy,” Gould said.

“It was a rollercoaster,” Long said.

After the penalty, Pelote found Bradshaw for 15 yards to the Tabor 10. Two plays later, Pelote threw to the left side of the end zone to Driver, who made a game-winning TD catch that was beyond amazing.

“It was a one-handed catch,” Gould said. “It was one of the best catches I’ve ever seen on JV. He went up with his left hand and snagged it. He ran a bench (route). It was thrown behind him, but the defender had undercut it and it worked out to where Ethan was able to catch it on the back shoulder.”

“It’s one of the best catches I’ve ever seen in my life,” Devericks said. “It was fantastic.”

Davie was ahead 20-18, but there was one problem: 3:15 remained on the clock. Tabor moved all the way to the Davie 15 as it threatened to steal it back. Johnson preserved the win by intercepting a pass.

After losing 12-7 to East Forsyth and 56-13 to Reagan, there were multiple reasons for Davie (4-3 overall, 2-2 Central Piedmont Conference) to savor this one.

“The defense played really, really well,” Devericks said. “It was probably the best they’ve played as a unit this season. These guys are learning we can compete when we execute the right way. We executed better on both sides of the ball.”

Freshman linebacker Luke Wayne was another hero, getting an interception and a fumble recovery.

“He dropped back and picked off a slant pass,” Devericks said. “They’d been running two backs all night with heavy downhill run action towards us. (Their quarterback) raised up to throw and Luke got in his drop and he was right in the window. He did a good job reading his keys and reading pass.”

Sophomore defensive end Billy Krause only added to his impressive resume, and freshman d-lineman Lane Griffin made a highlight-reel play.

“Billy’s got a motor,” Devericks said. “He’s ready to work every day. He doesn’t take any reps off. He wasn’t satisfied after the game. He was like: ‘I had a bad game.’ I said: ‘No man, you had a really good game.’ Sometimes kids don’t see their hard work pay off because they don’t get all the tackles, but teams see where they can run and they adjust to who’s causing the problems.

“Lane had a great hit. They left him unblocked to run counter trey the other way, and Lane came through there and put a good lick on the running back.”