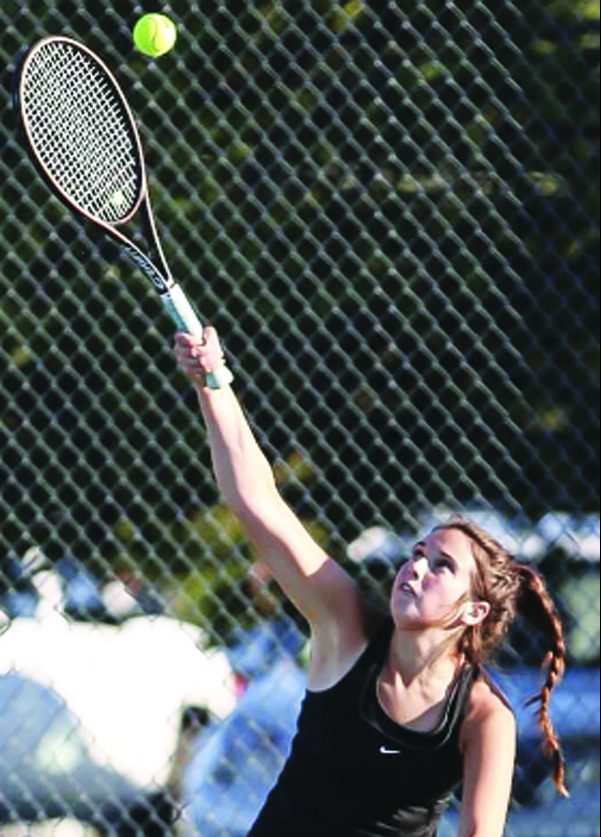 When Davie’s tennis team lost 6-3 at home to Reagan in June of 2021, the War Eagles wrapped up a 5-7 Central Piedmont Conference season that left them in fifth place. That came on the heels of a 3-7, fourth-place finish in 2019.

The War Eagles haven’t lost a regular-season match since that June day in 2021. How mind-blowing is that?

Last week was more of the same from the War Eagles. They whipped Mt. Tabor and West Forsyth, nailed down a repeat CPC championship and extended their regular-season winning streak to 25.

“While we beat them 9-0 twice and their record doesn’t look great, Tabor is a hugely improved team from where they were a year ago,” Ferebee said.

Aderhold, a freshman, has made a habit of knocking off upperclassmen, and she tore through a senior from Tabor. But here’s the best part of the match: Marklin overcame a first-set loss and rallied past Meredith Rodda to push Davie’s record in third-set tiebreakers to 9-4 across the 2021-22 seasons, including 4-1 this year.

“All of my seniors are in the middle of being a senior, application processes and scholarships, and they’re carrying a lot of stress with them,” Ferebee said. “I think this was just one of those days when Sarah West was carrying a lot with her on the court and was trying to work her way through it. We had a little talk (after the first set) and I told her to take it one game at a time. Then she ran off the next six (games).”

The home match against West Forsyth on Sept. 28 was historic for the War Eagles, who have been playing girls tennis for 47 years. Not only did they clinch first place, they ran their conference winning streak to a record 21; the old record of 20 was set from 2015-17.

But one of the three Davie losses was as impressive as any win. Newsome, the top seed, took her performance to another level in a 7-6, 6-4 loss to junior Samantha McEachran, who had looked invincible in the CPC for three seasons. McEachran, the two-time singles champion who has never lost a regular-season match, beat Newsome 6-3, 6-1 on Sept. 6. But this time Newsome gave her all she could handle.

“The story of the match was Elliot,” Ferebee said. “Yeah, she lost to Sam, but I don’t think anyone (else) has gotten close (to beating her). She was so close to victory she could taste it. We had a plan for her and the plan was: ‘You almost did it last time; this time you’re going to be competitive.’ And by gosh, was she competitive. I don’t love moral victories, but that’s a moral victory.”

And then: “Losing Karlie (to injury) last year was obviously terrible because we love Karlie and she’s a big part of our team. But it made Elliot have to get better; she didn’t have a choice. If you haven’t seen the improvement from Elliot in match one to Elliot today, it’s astronomical.”

Newsome is 9-0 against everyone but McEachran. Quinn is 11-0 at No. 2. Their practice battles serve them well when they hit the court for real matches.

But Newsom regrouped in time to help Newsome seal the win at No. 2 doubles by a lopsided score of 8-1. Marklin/Aderhold added the exclamation mark, 8-2, at No. 3.

“Leslie was frustrated, obviously, and she was a little disappointed in herself,” Ferebee said. “But she and Elliot went back on the court and they were the ones who won us the match. It’s a pretty good turnaround to lose your first match of the season and then go clinch the championship.”