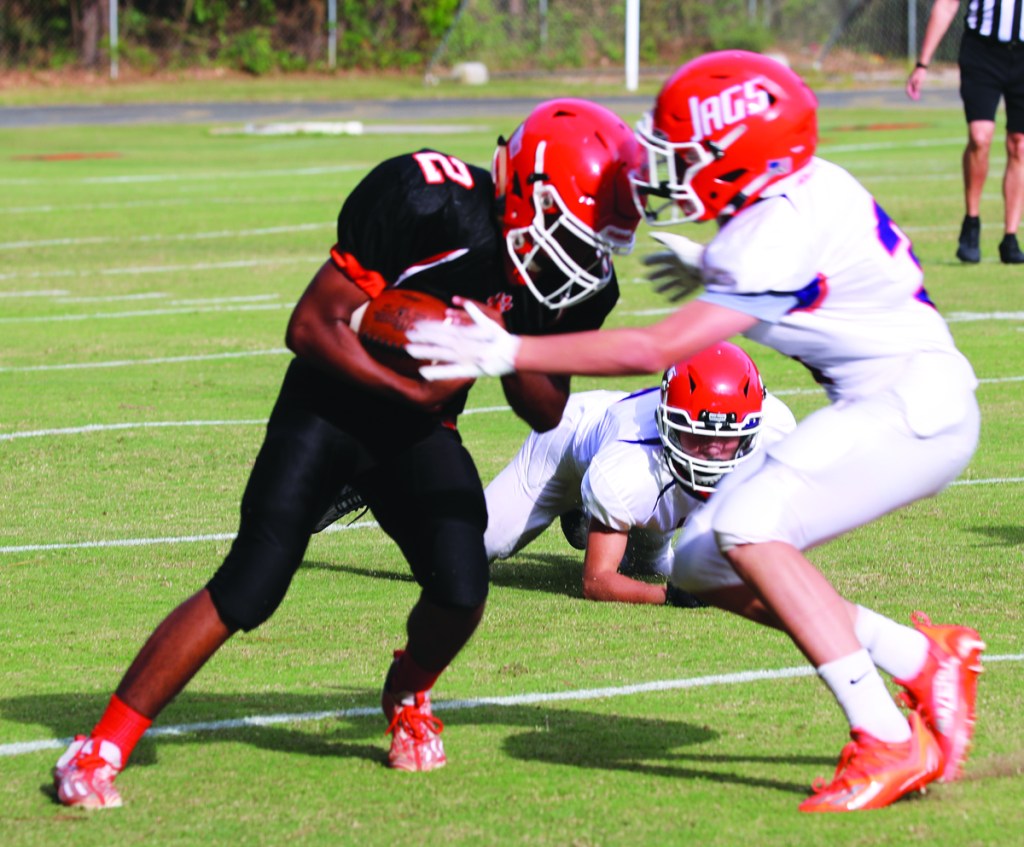 A blowout win over South Davie seemed like a pretty safe bet for the Ellis football team. After all, the Jaguars pummeled South 40-0 on Sept. 7, and they came into the rematch at South having not merely won all three games, but having outscored opponents 115-14.

There was just one problem: South wasn’t having it. The Tigers found motivational fuel from the Enterprise’s headline after the first meeting: Easy work. Ellis rolls over country rivals. They brought passion and enthusiasm to the Sept. 28 rematch, and they weren’t intimidated by unbeaten Ellis.

South gave Ellis headaches in the first half, but in the second half the Jaguars showed why they haven’t lost since the spring of 2021, turning an 8-6 halftime lead into a comfortable 28-6 victory.

In a classic letdown situation, Ellis was actually fortunate to be ahead at halftime. Its only score came on defense as Brandon Forrest intercepted a pass and returned it 50 yards for the game’s first score. Elijah Chaffin’s two-point run made it 8-0.

South came back with a 45-yard touchdown pass from Draeton Nance to Noah Dulin, who beat the cornerback on a post route. South’s two-point try failed and it was 8-6 at intermission.

“We might have given up 50 yards in the first half,” South coach Germain Mayfield said. “We had the perfect game plan. Defensively, the goal was not to give up any big plays and keep everything inside. The first game, they never got to third down. (This time) we got to the ball and we finished when we got to it. They only had one split (out wide), so we walked the safety (Laz Smith) down, we walked the free DB down, we played 10 in the box and dared them to throw the ball. We played as good as we could play.

“Our practice habits changed (after the Tigers saw the headline in the paper). They were holding each other accountable because of that headline. We showed how far we’ve come since the first two weeks.”

South’s TD was set up by passes in the flat to running back Jayce Bentley.

“We had been running the same play to get the safety to move out of the middle of the field,” Mayfield said. “We swung Jayce out of the backfield and hit him a few times. We were picking up 5, 6, 7 yards. The safety started moving, so we ran a post route on the backside. Draeton faked (the pass in the flat) and came back to the middle of the field.”

For the Tigers, there were mixed emotions at halftime. Hanging with Ellis created goosebumps, but at the same time, they felt like they should have been ahead.

“Every time we would have a big play – we had three holding penalties – we’d have a penalty,” Mayfield said. “Who’s to stay we would have scored, but they were huge (penalties).”

The Jaguars rode a tremendous second half to 4-0. They went beast mode and reached the end zone on Chaffin’s 30-yard run, Braxton Bowling’s 15-yarder and Forrest’s 10-yarder. The Ellis offensive and defensive lines came at South in waves.

“Their physicality just took over in the second half,” Mayfield said. “Their offensive and defensive lines started coming off the ball and we didn’t have an answer. They’re better because they’re more physical up front. They came out and proved they’re the better team in the second half.”

“We had come up with a game plan to block their defensive line a certain way, but they put a blitz package in,” Chaffin said. “We were double-teaming and our guys never got out of it (in the first half). We single blocked (in the second half) and started moving the ball. They had a good game plan.

“It was a good, competitive game and hard-hitting. South’s got some great linemen. I told our guys we’re not competing against them anymore. Y’all are brothers now. Y’all are going to play together at the high school.”

Linebacker Chaffin was everywhere defensively for Ellis. J’seire Arnold and Evan Helms were terrific on the ends. Braylon Arnold was a force on the d-line.

The Tigers (1-3), coming off a dramatic 20-18 win over North Davie, were hampered by the absence of two-way lineman Ahmad McGee.

“Our best lineman was out (with a broken hand),” Mayfield said. “With him, we might have moved the ball better in the second half. They just sent more than we could block.”

North Davie tore through visiting Millennium Charter 52-6 on Sept. 27. It was the first win in three tries for the Wildcats.