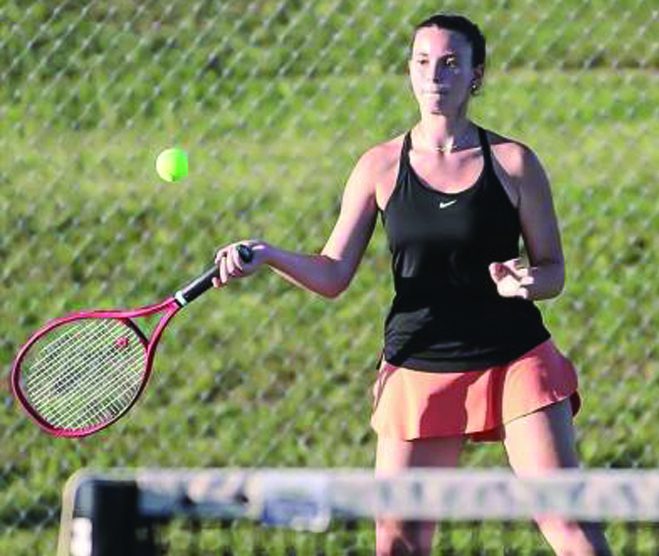 Reagan was missing No. 1 Lydia Berger when the teams met in August. Davie won 7-2 but coach Collin Ferebee knew that wasn’t the real Reagan team.

Berger was in the lineup opposite Elliot Newsome last week, but Davie’s profile only grew in an 8-1 dismantling.

“This was their full strength lineup,” Ferebee said. “They got stronger and we beat them the same.”

The most outstanding performance came from Koren, who won in a third-set tiebreaker.

“Tru lost the last time (on Aug. 29), but she turned it around and beat the girl who played No. 2 last time,” Ferebee said. “To play a better player and turn a loss into a win gets player of the match.”

The War Eagles, who are 9-0 overall and 7-0 in the Central Piedmont Conference, have a comfortable lead over Reynolds and West Forsyth, both of which are 6-2. Their CPC winning streak moved to 19, one shy of the program record.

Oh, and there’s this: Davie has played 12 third-set tiebreakers in two years. It has claimed eight of them, including a 3-1 mark in 2022.

“I put different pressures on the line (in practice),” Ferebee said. “Obviously, you can never simulate a match, but we put pressure on in practice: You’re down 0-5, claw your way back. So they’re used to it. Hopefully it feels like second nature to them. We lost some close, crucial matches my first two years coaching, and I made a decision one day: We’re not going to lose tiebreakers and we’re not going to lose because of doubles. And the last two years, that’s been pretty true.”

Notes: One day before playing Reagan, the War Eagles cruised past visiting Glenn 9-0. Gabby Thompson played No. 6. Thompson and Jasmine Brickey played No. 2 doubles, while Grace Jacobs/Katelyn Cohen played No. 3 doubles. … Five of Davie’s six regulars in singles have no more than two losses. Newsome is 8-1 at one, Quinn is 9-0 at two, Koren is 7-2 at three, Newsom is 8-0 at five and Aderhold is 8-1 at five/six. In doubles, Quinn/Koren, Newsome/Newsom and Marklin/Aderhold have a combined record of 18-2. Quinn/Koren are 8-0 at one.