One for the ages: South beats North in thriller 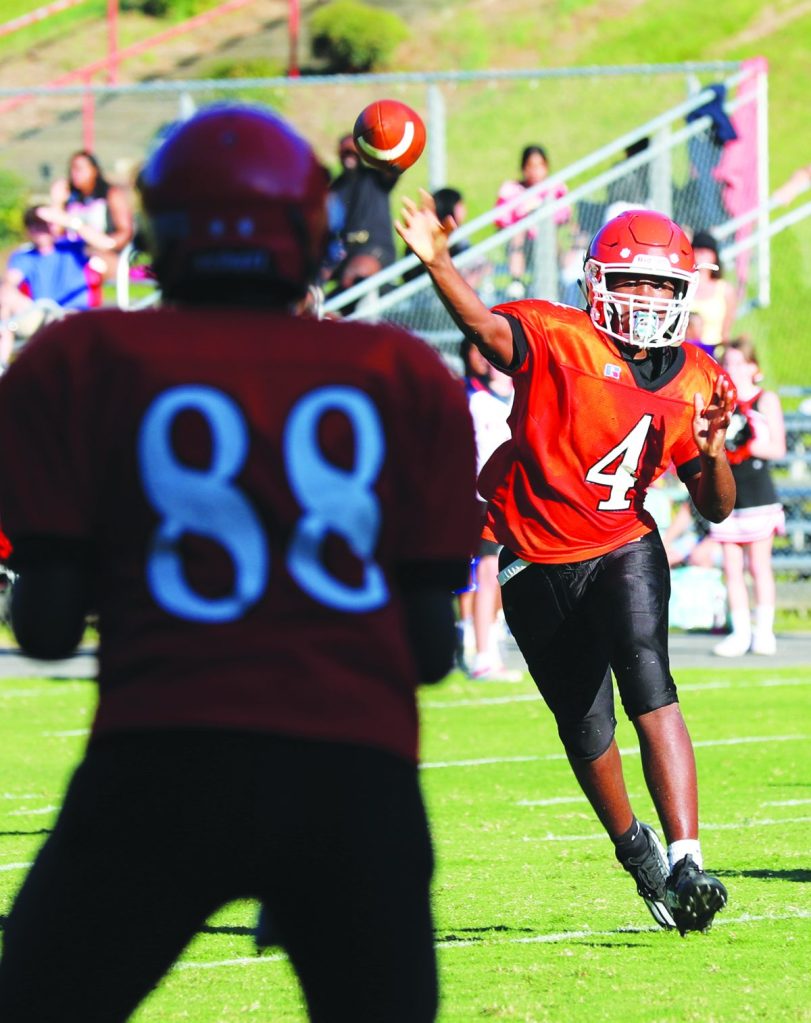 In a finish that was as wild as it gets, South Davie’s football team made one more play than visiting North Davie and slipped away with a 20-18 victory on Sept. 21.

“It was most definitely a good one,” South coach Germain Mayfield said.

“The kids played their butts off,” North coach Timmy Allen said. “Kudos to South Davie. They played a great game. They made plays when they had to; we didn’t.”

Neither team led by more than six. South got on the board first on a touchdown run by Jayce Bentley, who had a huge day while scoring all three South TDs.

It was 6-6 at halftime after North quarterback Blake French tossed a 4-yard TD to Wyatt Harwood. North had a 12-6 lead when John Evans broke a 60-yard run. Then the momentum swung to the Tigers, who tied it on a Bentley run that was followed by QB Draeton Nance’s successful two-point conversion. That gave South a 14-12 lead.

Bentley achieved a hat trick with 1:20 left, scoring his third TD. Even though South missed the two-point try, it seemed all but over at 20-12.

But North’s Ian Patton made this a game for the ages by answering immediately. On the ensuing kickoff, he stepped up and took it to the house with 63 seconds remaining.

“We tried to squib it and it didn’t work out,” Mayfield said. “We kicked it too hard.”

“The funny thing is we made that substitution on that one kickoff, within 15 seconds,” Allen said. “We needed somebody to go in there. We were gassed and I wanted somebody else back there. I wanted fresh legs. It got sprung by John Evans. John had the block. He’s been penalized for blocks this year, but that one was clean. He set the edge, pinned the kid in and Patton read it perfectly. Patton is about 6-1 and he’s a good athlete. He’s got some straight-line speed for sure.”

With South clinging to a 20-18 lead, now the tense game hinged on the two-point conversion. The play was a QB keeper for French, who fumbled. The ball wound up in Evans’ hands and he crossed the goal line for an apparent score that would have likely forced overtime. But there was a flag for illegal touching, which meant North had to try again from the 7-yard line.

On the next attempt, French tried a pass but was picked off by Nance. Then it was victory formation time for the Tigers. On the other side, it was a gut-wrenching loss for North.

“It was a tough pill to swallow on the two-point conversion,” Allen said.

It was a welcome performance for the Tigers, who improved to 1-2 after losing 12 of their previous 14 games across three seasons. The catalysts were Bentley and Nance, who completed six passes. His completions went to Noah Dulin, Jayden Warren and Bentley, who had two catches each.

“I’m pretty sure Jayce had at least 130 rushing yards,” Mayfield said. “Draeton had over 100 yards passing and I bet he had 60 yards rushing.”

South got a strong performance from both lines. The offensive linemen were Marcus Fortune, David Hicks, Ean Click, James Mayfield, Luke Foster, Ahmad McGee and Isaiah Leonard. The d-linemen were those same guys plus Sam Zeack.

“Our OL played their butt off,” Mayfield said. “That’s the best they’ve played all year. Our defense got three turnovers (two fumbles, interception). The DL was lights out.”

Bentley made a monster play on defense when North’s Javon Carter was heading toward the end zone. He forced a fumble that Leonard recovered.

“(Carter) was going up the sideline and they were going to score,” Mayfield said. “Jayce just happened to have an angle and made a play. It was about a 40-yard run. (Carter) was about to put it in cruise control. Then the ball came out.”

When South was ahead 14-12, the teams exchanged turnovers. South lost a fumble inside its 10. On the next play, North fumbled and South’s Aidan Szewczyk recovered.

It was a game that North (0-2) easily could have won. There will be a rematch later in the season at North.

No one played harder for North than Graylan “Bam Bam” Anderson.

“He had a big hit on a kickoff, and he’s a little kid,” Allen said in amazement. “He plays anywhere we can find a spot for him. He’s the smallest kid but he plays hard every time. When he laid the wood on that kickoff, you heard it and said: ‘Who did that?’ They said: ‘That’s Bam Bam.’ He wrestles for us, too. He’s a little hammer. He wrestles just like he plays football.”

Ledford had more size than visiting Ellis. Ledford had plenty of athletes. And Ledford was ready for the Jaguars on Sept. 21, erasing their 7-0 lead by jumping ahead 8-7.

“That team was good,” Ellis assistant coach Kendall Chaffin said. “That team was tough. That team had 60 kids and they were way bigger than us. When I say big, they were humongous. And they had athletes, too.”

And now we play, “Guess the outcome.” The Jaguars ran into a team that leaned on them, wore them down and handed them their first loss? They finally faced an opponent that had too much speed and suffered their first loss since a game at Starmount in the spring of 2021?

Nope. Ellis demolished Ledford 35-8. The Jaguars continued to soar, scoring 28 unanswered points, improving to 3-0 and extending their winning streak to 11. (The program record for longest winning streak is 15, set from 2010-12.)

“We had a slobberknocker,” Chaffin said. “We didn’t play a pushover today, I can promise you that. Our guys balled out. I mean they really grinded. There was a ton of people there and we stunned them. Our guys grew up today.”

Ellis’ play was beyond inspiring.

“(Forest’s 7-of-7 passing) is unheard-of in middle school,” Chaffin said. “They probably had three first downs all day. They scored on us because we missed some tackles.”