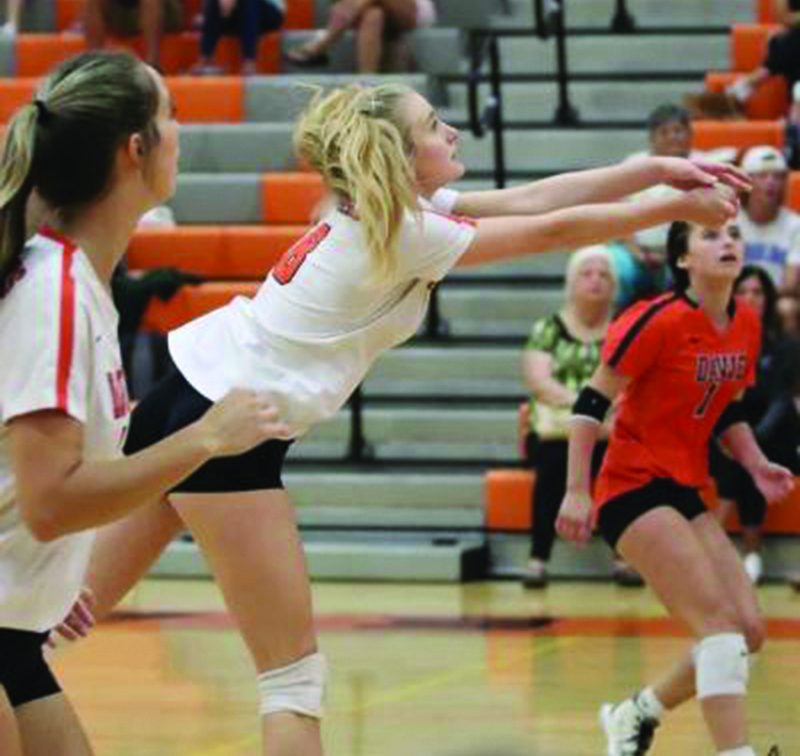 Senior Emma Hayes bumps it over the net.

This was a put-up-or-shut-up match for Davie’s varsity volleyball team. There’s a fierce battle for second place in the Central Piedmont Conference, and the War Eagles could ill afford to lose at West Forsyth on Sept. 13.

Last year the War Eagles went 22-5 and shared first place, and they started 2-0 this year. But the luster was gone when Davie traveled to Clemmons. They had lost five of seven.

It looked like it was going to be a coin-flip match, and that’s exactly what it was. There was one common opponent in East Surry. Davie lost in five sets to East; West beat East in five sets and the Titans were riding a 5-1 run, with the only loss during that stretch coming against unbeaten Reagan.

“We changed our warmup strategy,” Brandon said. “I thought: ‘How can we get going and play better a little faster?’ We won the first set and I felt really good about that. We did some things that we had been working on really, really well.”

The second and third sets, though, were ugly for the War Eagles.

“It felt like nothing was going right for us,” Brandon said. “We weren’t very good from the service line. We were flat. We had some kids who had been playing really well all season struggling at a level that I had not seen them struggle. West Forsyth is always the hardest gym for us to play in. It’s very, very different than our gym. It’s low rafters and that’s something we don’t ever have to worry about at practice. So I think it was a combination of things. The weight and the pressure of that game maybe got to some of them, especially some of the seniors. After the second set, we made a lineup change. Clearly, it didn’t work in the third.”

When Davie faced deficits of 4-2 and 5-3 in the fourth set, it was borderline cooked.

“The fourth set started kind of the way the second and third ended,” she said. “I’m thinking: ‘What are we going to do tomorrow? What’s the next step?’”

With Davie staring down the barrel of the first loss to West since 2019, with Davie in jeopardy of falling to fifth in the standings, it circled the wagons. Everything changed when Hailey Johnson went to the serving line.

The gritty War Eagles won the fourth and fifth sets. They moved into a tie for third. They beat the Titans for the fifth straight time. Johnson, Gracie Wilson, Mikaylah Hutton, Kiah Mathis and Lauren O’Connor made all of that possible.

“Hailey went on a serving run that got us back in the game,” Brandon said. “We got a couple of good swings out of the middle from Gracie that got us the lead, fired our kids up and gave us some new life. One change to the lineup in the fourth was putting Mikaylah in as an outside and moving Kiah back to the middle, which is where she played her first three years on varsity. Mikaylah gave us a burst on the outside. She saw some balls go down that we hadn’t seen hit the floor.”

O’Connor was lights-out in the fifth.

“We had the momentum on our side and the kids wanted it,” Brandon said. “Lauren went on a heck of a serving run in the fifth set (eight straight points). West Forsyth called a timeout and Lauren came out of the timeout and got an ace, which is always a big momentum thing in volleyball. From there, we commanded the fifth set.”