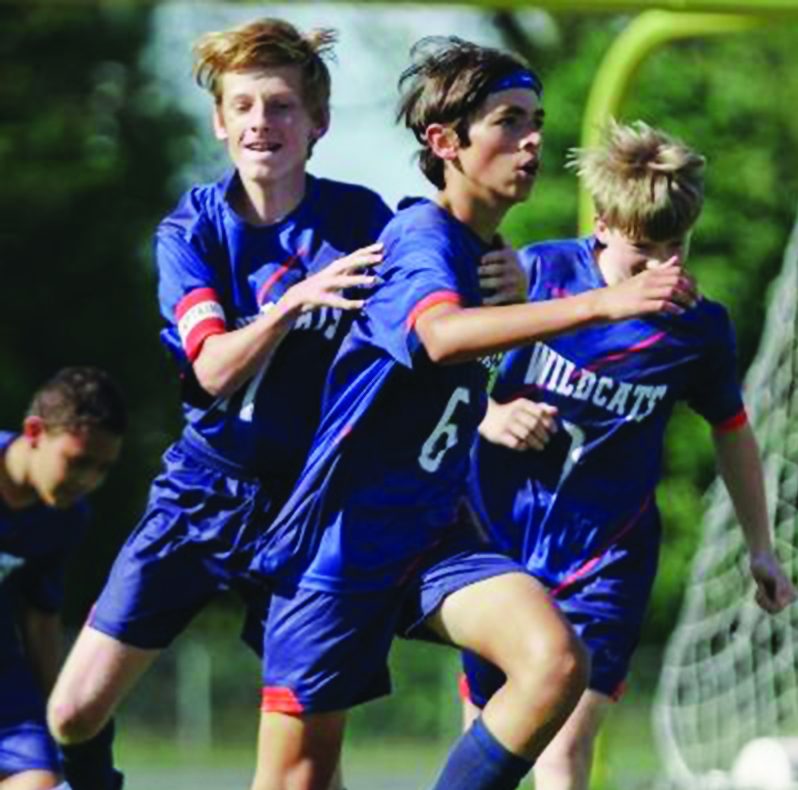 The North Davie soccer team is an inspiring story.

They didn’t play especially well at South Davie on Sept. 13, yet they still blew away the Tigers 4-0.

North scored twice in each half. The goals came from Ethan Christie, Max Rappaport, Hunter Stephens and Manny Perez. Dylan Cassetta and Stephens had the assists. South remained winless at 0-3.

“We really did not play that good,” Gamble said. “Our touches were just off. But our defense was solid. Sheer will pushed through on the offense.”

Back on Sept. 8, North took a major step forward with a 5-4 win over Wesleyan Christian Academy. The latest statement win came on Sept. 14, when the Wildcats raced in front and held off visiting Canterbury 2-1.

“They have normally whupped up on us pretty bad, so it was good to beat them,” Gamble said.

Hector Rodriguez, with an assist from Rappaport, scored in the first two minutes. Then Stephens deposited a goal that was assisted by Rodriguez. It remained 2-0 through the rest of the first half, although North could have had more breathing room.

“We controlled probably 90 percent of the first half,” Gamble said. “It was probably the best we’ve played yet. They would just congest the goal so much and that slowed everything down for us. We kept pounding away at it, we just couldn’t get the ball to go in because there was nowhere for it to go.”

The Cougars regrouped and cut the margin in half.

“In the second half, they made some adjustments, we came out a little flat, and (Canterbury’s goal) was just an amazing shot,” he said. “There was nothing we could do about it.”

The end was stressful for North, which lost defender Cassetta to injury.

“A couple of our starters got injured in the game, so we ended up playing more defensively toward the end,” he said. “In the last two minutes, one of our main defensive players (Cassetta) got injured and had to come out. It was kind of a scramble and it ended up being a lot more stressful than it needed to be.”

The Wildcats should soon clinch their first winning record since 2009. Six players have at least three goals, led by Rodriguez’s nine. Kellan Wiles and M. Perez have six each. Christie and Stephens have four and Rappaport three.

“We’ve got a lot of good scorers,” Gamble said. “A couple of our second-string guys have scored. We’ve built this depth over a couple of years, so we’re getting to enjoy the fruits of it.”

Stephens is North’s greatest assist man in memory. He already has 10, or seven more than the next guy.

“He’s a good passer and he’s unselfish,” Gamble said. “Sometimes he probably should be selfish because he’s got that great left foot. Overall, we’re passing the ball good and assisting each other.”

To say the Ellis soccer team bounced back from its opener would be an understatement. Nine days after a dismal 9-0 loss to North Davie, the Jaguars pounded out a 4-1 home win over Summit on Sept. 15.

“This was a big win after losing to North,” coach Susan Jones said. “We spent the last week working on defense and moving players to new positions, and all their hard work paid off. So today’s game was a reboot and new start our boys needed mentally to show them what they can do.”

“Eric played beautifully,” Jones said. “Osiel and Santiago are names you will be hearing again. These two are quite talented and very quick. They really stepped up and embraced the moves we made in putting them back as mids instead of front strikers. This also had a huge impact on how well we played defensively compared to the first game.”

Jones made a lot of changes after the first game. Austin Eggers, Seager Brooks and Hernandez validated the moves.

“We moved three key players to the defensive line after our first game, and it made a huge impact immediately,” she said. “Two of these boys (Eggers and Brooks) moved from midfield to the defensive line, and their speed and aggressive play was sound and tough and just what we needed. Brandon moved back and played sweeper, not only helping create a wall but also pushing the ball upfield offensively. He did an amazing job getting it to our strikers.”

Also give credit to goalie Nathan Harding, who had four saves. “Nathan played his first game as goalie and played fearlessly,” she said.