Newest respect ambassadors ‘give us hope’ 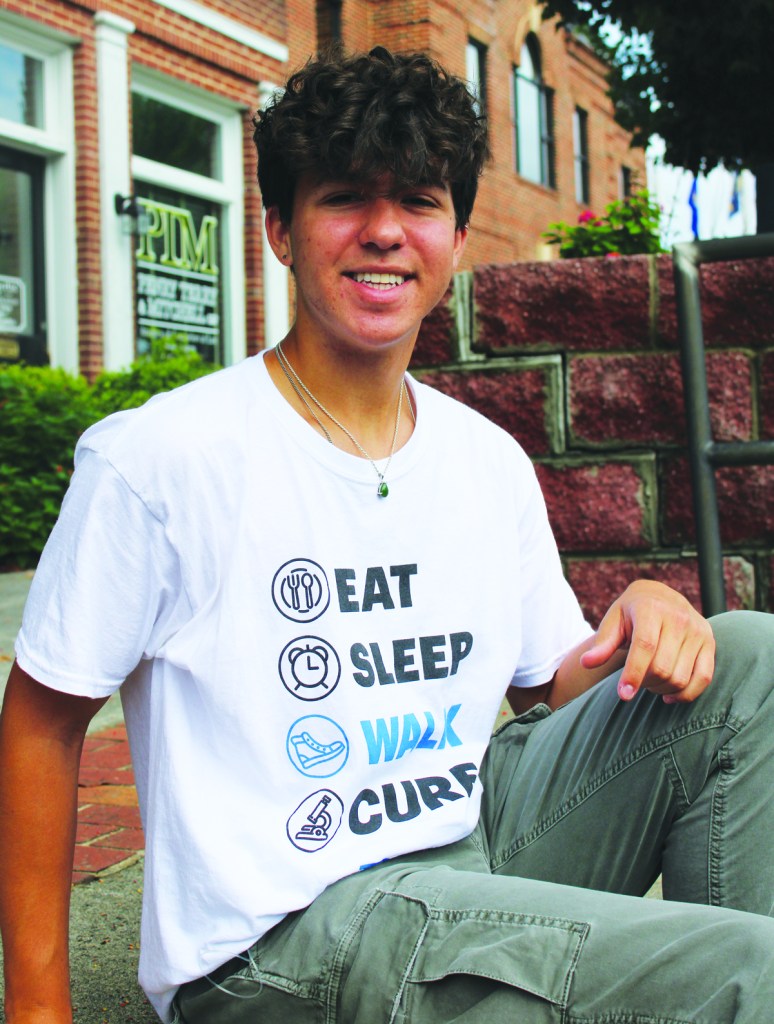 Jack Williams is an ambassador for the Davie Respect Initiative and the Juvenile Diabetes Research Foundation. - Photo by Savannah Ivey, Davie High intern

Madelynn Keller wants to recognize people for the small things they do to make life better for others.

Sean Lane wants to create cards to give to others with positive messages and quotes.

All three are the newest Respect Ambassadors for the Davie Respect Initiative; and all are Davie High School students. They received $1,000 to help bring their ideas into the community.

Bermuda Run Mayor Rick Cross presented the awards on behalf of the initiative in a ceremony at the town hall.

“When I have time with folks like these three young people, it gives us hope for what the future will hold,” Cross said.

Dr. Stephen Leighton came up with the idea in 2017 after moving to Davie County. “We started to think, what’s a way we can make it even better than it already was.”
The Davie Respect Initiative was born, and has been giving out those $1,000 awards multiple times a year.

It was about that time that Leighton heard that young people didn’t recognize how they could make a difference. “We decided to tap into those young folks in Davie County.” The awards go to Davie residents age 12-21. Apply at www.davierespect.com.

“It’s all about great ideas being put into practice,” he said. “The money is an incentive.”

“It’s giving me the opportunity to do something I really enjoy, which is crafting and making cards,” Sean Lane said. “And spreading respect throughout the community.”

Lane already has made a few cards, and designed others, and is working on finding the people who would most benefit from receiving a card.

“The cards share positive messages and quotes, encouraging recipients to care for others. The cards are all designed and created by me, with love.”

He hopes others will join him in his Cards for Kindness campaign.

“My project is all about encouraging others, of all ages, to show respect to their community. My cards are made with the intention to sprout the motivation to be kind, considerate, and maybe even to inspire to create a project of their own,” Lane said.

He truly believes in respect.

“I’ve seen how a person’s attitude and the little things that they do can be the most impactful form of respect,” he said. “Being empathetic and considerate are great ways to show respect to your community.”

It works both ways, he said. “Receiving respect can feel fulfilling and joyful. The feeling of receiving respect encourages the golden rule: Treat others the way you want to be treated. Being treated with respect empowers others to demonstrate respect.”

It doesn’t take a lot of effort, either. “Showing respect for others is hardly ever big, or heoric. The little things, like holding the door open for someone, can show respect. Giving a simple compliment, or even sharing a conversation with someone shows that you respect and care for them.”

Madelynn Keller is starting the “Creating Community Column,” working with the online student newspaper The Weekly Talon to highlight respect acts by staff, students and clubs in the Davie County School System. She will start a Google Form for nominations.

“Every Creaving Community Column would be requested to be presented to every elementary, middle and high school classroom, encouraging respect in the community and highlighting those who have been actively demonstrating respect.”

The goal? “I hope to help people in our community feel seen and heard because even the smallest acts of respect can have the biggest impacts on people’s lives. Those who make life in Daive County enjoyable deserve to be recognized in all that they do. I have heard countless stories of burnout in the wake of the coronavirus pandemic and our community could really use uplifting stories, that despite hardships, the kindness of others will prevail.”

Keller continued: “Living in a close, tight-knit community such as Davie County, I have been on the receiving end of respect and kindness from neighbors, family members, teachers and peers. Respect isn’t as simple as being kind.

“Respect is what makes life liveable and enjoyable. Everybody needs to be recognized. It is the small things that make other people happy. We need to focus more on the positives and less on the negatives. That’s what will bring us all together.”

Jack Williams was diagnosed with Type 1 diabetes in October of 2018. Now, he’s not only a Davie County Ambassador for Respect, he’s a youth ambassador for the Juvenile Diabetes Research Foundation.

He said he is lucky: he had loving families with resources, families that supported him through his diagnosis, and through the death of his father just prior to his freshman year in high school.

“Unfortunately, many students in our school system may not currently have access to the resources that I had,” he said. Williams recalled a friend going through the same situation with diabetes, but with different results. “This was deeply saddening for me because I knew that he didn’t have the same access to the educational resources and equipment I had, which was causing him to be falling behind.”

He wants to work with adults and the school children to identify and make sure those with diabetes get the help they need.

Williams plans to start a peer support group, find resources for families with children with diabetes, and print a monthly pamphlet with up-to-date resources to be distributed in the community.

“This resource would extend important opportunities in the community to families that are especially in need,” he said. “I believe that a network of resources for the management of diabetes would significantly benefit those in our school system who are currently struggling with the ins and outs of bodily health after being diagnosed with diabetes.”

“When respect is shown throughout our community, the individual that receives that act of kindness or respectfulness is generally more likely to pass it on to others.
A person who is demonstrarting respectful behavior to those in their community will become a role model to their community and their peers.”