Bermuda Run board says no to proposal for apartments 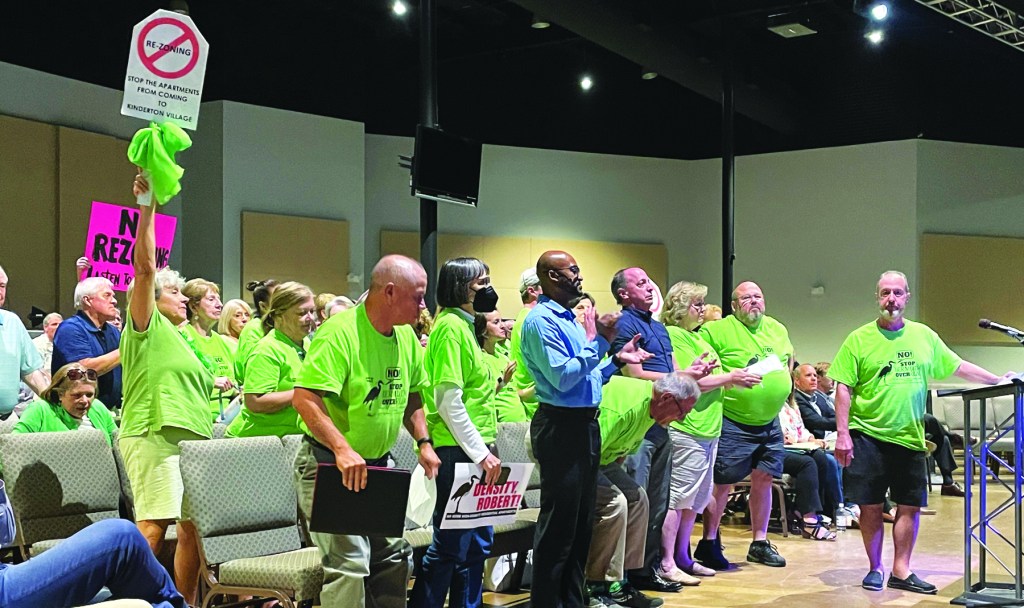 Residents of Kinderton Village and other parts of Bermuda Run voice their displeasure for the proposal at a public hearing last week. - Photo by Jim Buice

BERMUDA RUN – How much interest was there in a rezoning request involving a potential 270-unit apartment complex on 19 acres between Kinderton Village and the Lowes Foods shopping center?

And the residents of Kinderton Village, united in wearing green shirts, holding protest signs and sending a steady stream of protesting voices to the podium to state their opposition during a public hearing, got the verdict they wanted.

After a two-and-a-half hour meeting, they loudly cheered when the council voted 5-0 to deny the proposed conditional rezoning request – finding the amendment is not consistent with the town’s Comprehensive Plan and does not consider the action to be reasonable and in the public interest, that the proposal is not consistent with the desired character of the surrounding community, and that the density will adversely impact the adjacent neighborhoods.

“My fear was that the rezoning would be approved and that it would destroy our community as we know it today,” said resident Paul Dixon who spoke against the project, which was initiated by RLM Development, doing business as Homes Urban, in the spring calling for rezoning part of an overall tract totaling 64.7 acres from Commercial Mixed (CM) to Village Mixed (VM) for the multifamily residential units.

It was met by overwhelming opposition from the Kinderton Village community with concerns related to high density, water runoff, traffic, noise and forever changing their tranquil way of life.

After the Planning Board voted to recommend denial of the request in its April meeting, the petitioner then decided to withdraw its initial rezoning request on the day of the council meeting in May before regrouping and coming back with numerous changes to the original plan – including a revised rezoning request for Village Mixed Conditional District Plan (VM-CD).

The Planning Board voted 5-1 to again deny the latest proposal in its August meeting.

Developer Robert Morgan, speaking on the merits of the Class-A multifamily apartments with 270 units on 19 acres (14.2 units to the acre) in nine 45-foot tall buildings, said that the proposed project has evolved over the recent months in response to the community.

He stated that Village Mixed with conditions is an appropriate use for the site and appropriate for current and future land use plans while being consistent with the town’s Comprehensive Plan – with buildings scaled consistently with the existing Kinderton Village condominiums to go along with first-class amenities, including a clubhouse, resort-style swimming pool, dog park and full-time staff.

Morgan also pointed out that rental housing is a necessary part of every community and that this kind of residential community will provide an additional type of housing that is in demand.

Sally Burnette McGuire of the Hillsdale Group, which owns the property, discussed how many times the Homes Urban plan has been revised to address the concerns of the Kinderton Village residents – from buffers to stormwater to the location of the buildings.

However, starting with resident Chris Bryant talking about nearly 1,200 petition supporters against the project to resident Lynn Cole, the last speaker – and all those in between – Kinderton Village would not be deterred.

“The collective intellect of a 1,000 outweighs even the best intuition of the five who will vote on this matter tonight,” Bryant said. “This vote will be a catalyst, but in the end it has far less to do with the result of a parcel of land than it does in confirming that our town governance is intact, in touch and in tune with the voters that elected it. This vote will determine the legacy of Bermuda Run.”

Dean Warren, president of the Kinderton Village Single Family HOA, said he was representing 416 households and asked council members if they felt like they were voted into their positions by the people to represent the majority of the town of Bermuda Run.

“If you are not for the people, then who are you representing and why?” he asked.

Chad Hedgepeth said that the entire problem can be summed up in a single word: “Density.”

Others made reference to the recent addition of over 200 apartments just across the interstate at Comet Bermuda Run and that this is the third request for apartment complexes in the town in three years.

Still others asked if this was all about bringing in additional revenue for Bermuda Run.

Only one individual who spoke during public comments had an opposing opinion. John Ferguson, the town’s first mayor and a resident in the community since 1975, said he’s been around a long time but that “we have to have growth, and we have to take care of all citizens. We cannot discriminate against people who are renters. I would recommend you folks take a very serious consideration on this vote.”

Finally, with the closing of the public hearing and Mayor Rick Cross turning the matter over to the council, Mike Brannon made the motion recommending denial, breaking down his decision based on four stated components – not consistent with the town’s Comprehensive Plan, not reasonable and in the public interest, not consistent with the desired character of the surrounding community, and the density will adversely impact the adjacent neighborhoods.

Brannon said that it then came down to the town itself and the people of the town, and through that lens, the result for him was to deny the amendment.

Council member Heather Coleman then seconded the motion before further discussion from the board members.

That included a lengthy comment from Melinda Szeliga, who said she and council members have listened and done their research since Day One, but she may have been “probably the most difficult person on this council for you to convince that this is a bad thing” because she once lived in the Comet Bermuda Run apartments, made friends with her neighbors there and thought the apartments were beautiful.

However, Szeliga also shared before the ensuing 5-0 vote to deny that “sometimes we do need to be careful for what we wish for. I am fearful for the commercial development than can go there. You could have someone come in and take down all those trees, not giving you any buffer at all. You’re going to be looking at the back of the grocery store and those power lines. I think that is going to be much more negative to your property values than if you have a natural buffer to protect you. But based on what you’re saying and what you’re sharing and your passion this evening, I truly feel like I have no choice but to go with what is being proposed and to also vote to deny the rezoning.”

McGuire, who is also a longtime resident of the community, added that as a member of the land ownership group, she has been accused of trying to make a quick dollar on this project but denied that was the case.

“Realistically, it would be likely easier for us to sell this parcel to someone else under the current zoning restrictions,” she said. “And that’s not a scare tactic. It’s just a simple truth, but with conditional rezoning allowing all of us to know exactly what the project parameters will be before building commences is an insurance policy that protects our community. Under the existing restrictions, any prospective buyer who wants to use the property under the current zoning ordinances can proceed at their discretion without community input.”