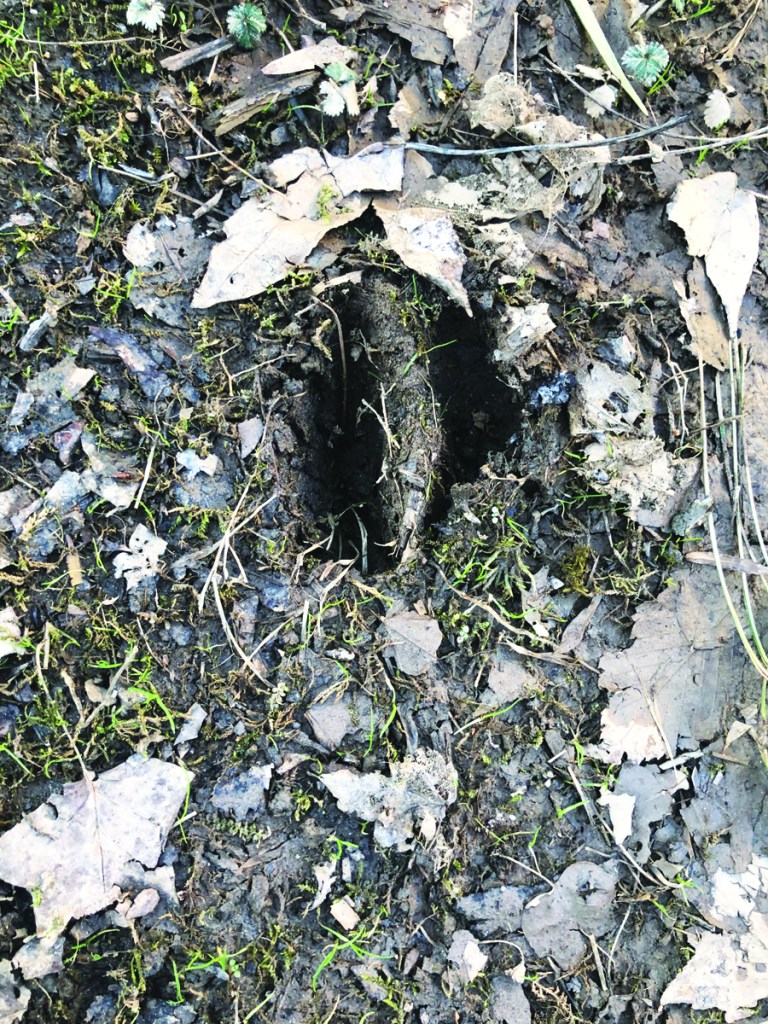 Hunters will be looking for big deer tracks like this one.

Hunters across North Carolina – especially in the northwestern corner of the state – are in for a mighty interesting deer season as the flag dropped for the statewide archery season on Sept. 10.

It is the first season since two whitetails infected with chronic wasting disease (CWD) were discovered in northern Yadkin County, causing officials with the N.C. Wildlife Resources Commission to establish two surveillance zones with regulations aimed at thinning the local herd and keeping the disease from spreading to other areas.

Also, the commission announced several weeks ago that outbreaks of hemorrhagic disease have been documented in the Piedmont, northwestern mountains and the Foothills. EHD is often fatal to deer that are infected by tiny, biting flies that get in their noses, principally in hot, wet summers. The disease fades out as soon as the weather cools, and it’s generally gone by the first freeze, but it often has an impact on the number of deer available in an immediate area.

The state’s longest continuous archery season is in the northwestern zone, ending Nov. 4. Archery season in the western zone is in two parts: the first ending Oct. 2, then Oct. 16-Nov. 20. The central archery season ends Oct. 28, and the northeastern and southeastern archery seasons end Season bag limits in all five zones are six deer, with a maximum of two antlered bucks. Either-sex seasons differ, in some cases, on a county-by-county basis.

Bowhunters accounted for slightly less than 8% of the total harvest. They will likely be the only hunters with the opportunity to take an antlered buck still in velvet. Bucks generally shed their velvet in late September as the breeding season appears on the horizon; I walked up on a 6-point buck in full velvet walking my son’s Lab in some woods within the Raleigh city limits this past Saturday.

The statewide opening of archery season in North Carolina is generally the second Saturday in September, at approximately the same time that a great majority of whitetail fawns have been weaned and can survive on their own if their mother is killed.

Through the years, biologists have told hunters that early season doe harvests are much preferred over late-season doe harvests because the size difference between adults and fawns is so great that hunters rarely take fawns by accident – as they do later in the season when fawns have gained another 20 pounds and can easily be mistaken for adult does. Plus, removing does from the population early in the season cuts down on the number of animals that have to split food sources, often allowing deer to enter the winter in better health.

Landowners and hunters interested in improving acreage for wildlife – which includes an awful lot of people these days – can get some great tips for habitat enhancement at an event later this month sponsored by the Yadkin Valley Wildlife Federation.

Wildlife biologist Nick Prough will hold a seminar on improving upland wildlife habitat on Saturday, Sept. 24, in the fellowship hall at Faith Church at 1078 Gumtree Rd. in Winston-Salem. The seminar will run from 10 a.m.-noon and be followed by lunch. There is no charge.

Prough has been chief wildlife biologist for the Quail and Upland Wildlife Federation since its formation in 2009. Before that, he worked for Quail Unlimited and the MIssouri Department of conservation, helping manage wildlife habitat for landowners large and small in several states. He has won numerous awards in his 28-year career.

Pre-registration is required by calling or texting Don Stroud at 336-682-3456. Indicate three favorite upland wildlife species; Prough plans to tailor the seminar to the interest of the majority of attendees.