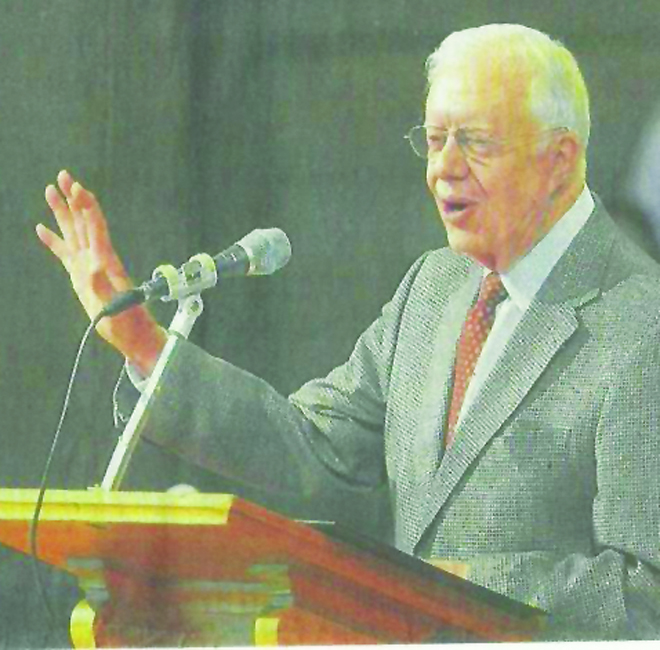 If you live in Davie County and want to visit sites connected to the 39th President of the United States, Jimmy Carter, you can do so by traveling only 298.2 miles. That is the distance from Mocksville to Atlanta, Ga., where The Carter Center and The Jimmy Carter Presidential Library and Museum are located.

Those are the Carter sites closest to Mocksville. Both The Center and the Presidential Library and Museum are on a 35 acre tract of land just outside of Atlanta.

The other President Carter sites are more distant in Plains, Ga., 433 miles from Mocksville. Plain is 146.5 miles from Atlanta.

Jimmy Carter was born in a hospital, the first United States President to be born in a hospital. The mother and baby then went to the Carter home in Archery, about three miles west of Plains.  Jimmy Carter lived in that house until he went away to the Naval Academy.  Jimmy Carter’s home in Archery is open to the public daily as are other buildings in the Jimmy Carter National Historic Park, which include the Plains High School, and the Plains Depot. Call 229-824-4104 for information about the Park, which is administered by the National Park Service.

The house where Jimmy Carter grew up looks just like many homes in Davie County which were built in the 1920s and 30s. It is a weather-boarded house, painted white and it has a screened-in front porch.  Until Jimmy was 13, the house had no electricity. The house was heated with wood heaters and the cooking was done on a wood-fired range. Electricity arrived in Archery about the same time that it did in the Cana community of Davie, which was 1939.

In recent years, Carter wrote a book called “An Hour before Daylight” which describes the work that had to be done on the farm before daybreak and what he was required to do. That book would be interesting to all the Davie people who grew up on a farm in the 30s and 40s.  A man who worked on the farm would ring a big bell about 4 or 4:30 to wake up all the farm workers. Jimmy, who his father, Mr. Earle, called “Hot.” also worked during the day plowing or carrying water to the farm workers.  Jimmy father said: “Hot, do you want to plow or carry water?  Jimmy would say, “Plow” because he much preferred that to carrying water. He actually liked the feel of the cool soil which the plow turned over. Jimmy did not have to work all of the time. He and his best friend, a black boy whose name was A.D., spent hours roaming over the many acres of the Carter Farm hunting and just exploring. They also spent time fishing.

Jimmy Carter went to school at the school in Plains. He graduated there at the top of his class. He wanted to go the Naval Academy but was not able to get a recommendation from his Congressman until about two years after he graduated from Plains High School. Jimmy excelled at Annapolis. During his last year there, he came home on leave. Jimmy’s sister got him a date with her best friend, Rosalynn Smith, a girl Jimmy had known all of his life, but something was different this time.  Jimmy soon realized that she was the person with whom he wanted to spend the rest of his life.  They were married after he graduated from the Naval Academy and when Rosalynn was 18. Roselynn, who had scarcely ever been out of Plains, looked forward to moving to new places and meeting new people.

Jimmy advanced in the Navy and his wife was happy each time they received a new assignment.  She got to be efficient at setting up their home in a new place even after they had three little boys.

Jimmy advanced in his career and all was well until tragedy struck. They received word that Jimmy’s father, “Mr. Earle,” was deathly ill. Jimmy was really torn over whether he should stay in the Navy or go home to Plains to help with his father and manage the peanut warehouse, which his father owned.  He finally decided he should go home.

When he told Rosalynn about his decision, trouble began. She did not want to move back to Plains, but no matter how much she cried, Jimmy’s mind was made up. They packed the car and headed south. Jimmy said that that was a cold trip because Rosalynn did not speak to him all the way to Plains.

Jimmy managed the warehouse successfully and Rosalynn finally agreed to help in the office. She realized that she liked the work and took over managing the business part of the operation, which gave Jimmy time to get involved in local political affairs. He began at the local level and ended up as Governor of Georgia.  Carter then decided secretly that he wanted to run for President of the United States.

The Carter family spread out across the nation campaigning. They often stayed in the homes of supporters partly because they thought it allowed people to know them better and partly because they didn’t have the money to pay for hotel rooms. The result of that person-to-person campaign was that Jimmy Carter was elected as the 39th President of the United States.  Carter’s success as president was somewhat limited partly because he did not really see the need of working closely with Congress. Also the Iranians stormed the American Embassy in Tehran and took more than 50 people hostage. Jimmy spent all of his last months in office trying to get the hostages released. He wasn’t able to campaign because he was working so hard on the hostage situation.  Jimmy Carter lost the election.

Mr. Carter and his wife went home to Plains. Even though Jimmy Carter was not one of the most successful presidents, he has gained great respect for his activities as an ex-president particularly for his work with the Carter Center. He and his wife have also been involved with the Carter Presidential Library and Museum.

Both Carters have worked untiringly for Habitat for Humanity, not only as committee members, but also driving nails to build houses for needy families.

President Carter is 95 and his wife is 93. They still live in the home in Plains, Ga. which they built years ago.  That house, of course, is not open to the public but can be seen from a viewing area. isitors can also see the old Plains High School and the Depot where Carter kicked off his presidential campaign and which served as campaign headquarters during the campaign in the town of Plains as well as Jimmy Carter’s  birthplace which is just west of Plains.