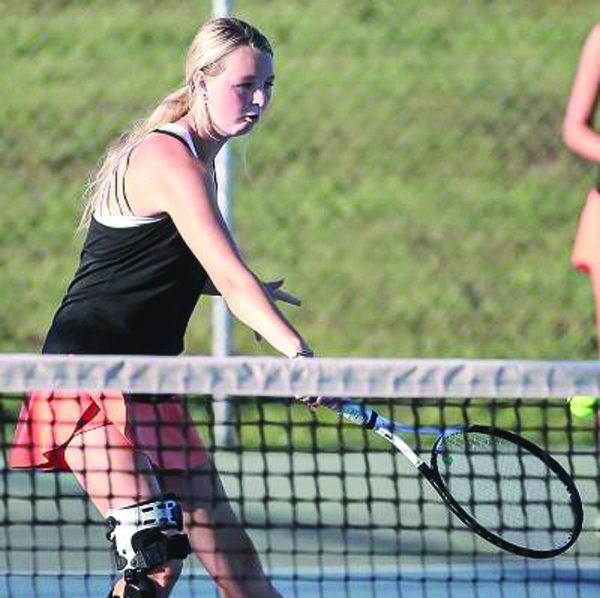 An undefeated opponent – West Forsyth – never tested the Davie tennis team in Clemmons on Sept. 6. The War Eagles, who squeezed out a pair of 5-4 victories over West in 2021, were considerably better than the Titans in an 8-1 rout.

“This is the most complete match we’ve played all season,” coach Collin Ferebee said. “I didn’t think we played very well against Reynolds. We played great top to bottom against West.”

Even the one loss saw an inspired effort from Elliot Newsome. She played fearlessly in 6-3, 6-1 defeat to junior Samantha McEachran, the two-time CPC singles champion who has never lost a regular-season match. Newsome, who went 13-2 as a freshman, had a 10-match winning streak stopped by the ferocious opponent.

“Elliot played Sam hard,” Ferebee said. “It wasn’t a drubbing like most people would have expected. I definitely think Sam is a (future) D-I player. Elliot came off the court and said she played like crap. I said: ‘Elliot, you just played Sam super hard. I know you’re used to winning, but you’ve got nothing to be upset about.’”

It was a fantastic day for Quinn, who improved to 6-0 in singles by taking down Vivian Do and then teamed up with Koren in doubles to beat McEachran and Do.

“Karlie played a really good No. 2, and she just destroyed her,” Ferebee said. “And then Karlie and Tru beat Sam and Vivian in doubles, and I don’t think I’d seen Sam lose a doubles match before.”

It was another impressive outing for the freshman. Earlier in the season, Aderhold beat a senior from Forbush and a junior from Reagan. At West, she toppled a junior.

“Players down the list don’t get a lot of credit, but we don’t drop off at four, five and six (with Marklin, Newsom and Aderhold),” Ferebee said. “Bailey has done a great job coming in as a freshman and starting from Day One.”

Notes: Last year when Davie went 12-0 in the CPC, Reagan, Reynolds and West tied for second at 8-4. Davie has defeated all three this season, including wins of 5-4 over Reynolds and 7-2 over Reagan. … West’s first-year coach is Gordon McEachran, who coached Davie boys tennis for one season in 2011. That team went 10-7, 8-2 and finished second in the CPC.